Here's some video that Dave Stubbs of Solway Dory took at Loch Ken. I feature in it briefly (going slowly!) but the star of the show is a guy called Steve Robinson sailing Dave S's canoe with an Expedition Rig (like mine), pivoting leeboard and side mounted rudder. As a result of chatting to Dave and seeing what his canoe is capable of I've decided that my next step is to fit a pivoting leeboard and a proper rear mounted rudder to my canoe as soon as I can afford it.

Having joined the Open Canoe Sailing Group last month I attended my first club meet recently. It was held at Galloway Activity Centre on Loch Ken in Dumfries and Galloway.
I drove down on Friday morning and consequently managed to avoid most of the royal wedding (yay!) I arrived at GAC at about two in the afternoon and set up my the awning next to the van in case it rained over the course of the weekend then I rushed to get my canoe rigged up and ready for action and met a few OCSG members who were already there. Stephen had got there about an hour ahead of me and was deep in conversation with Dave Stubbs of Solway Dory (the company who made my sailing rig). It was really cool to meet Dave S (and his partners in Solway Dory Dave and Jan Poskitt) in person.
The wind was forecast to be very strong and gusty all weekend so I made the most of the chance to get out for a quick sail. The conditions were pretty challenging and I didn't stay out for long as I'm pretty sure I'd have ended up swimming if I'd persevered.
The evening saw more folks arriving and a communal barbeque which was a great chance to meet folks over some food and a few drinks. Everyone was friendly and made myself (and fellow newbie Stephen) very welcome. 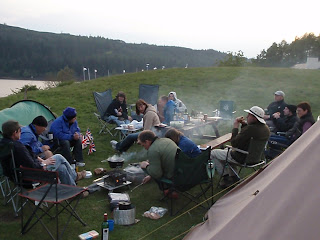 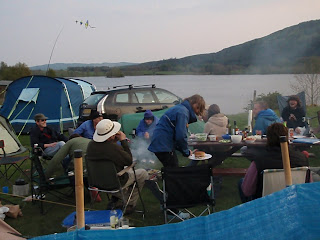 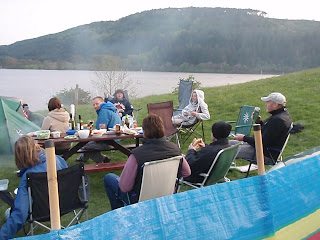 I was pretty tired having driven down after finishing a night shift so went to bed early hoping for a decent sail the next day. Overnight the wind moderated but by breakfast time it was starting to build again. There was a group meeting at 10am so it didn't seem worth rushing out onto the water (which was to prove a mistake). The OCSG is run on a fairly informal basis but they do have some safety protocols and these are always gone through for the benefit of new members (and to remind established ones) during the "10 O'clock meeting" which apparently is held on the first full day (usually Saturday) at club meets. Any relevant local information is also covered, all good stuff. We were done by half ten and people started making plans for their trips for the day. Stephen and I decided to stay local as we were unsure how well we'd cope with the conditions but when we went down to the loch it quickly became apparent that any sailing for us would be a bonus. Undeterred by the conditions a group departed to sail to the head of the loch as we watched from the beach. It wasn't long before one of the boats capsized on the far side of the loch and the whole group turned round to come back to reassess. 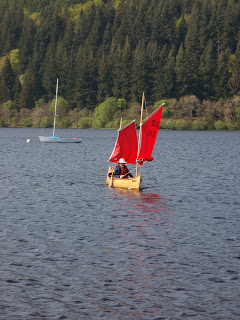 Paul in his lovely 1927 Peterborough Canoe shortly before his involuntary swim! 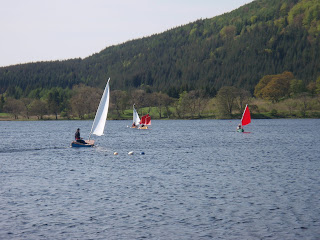 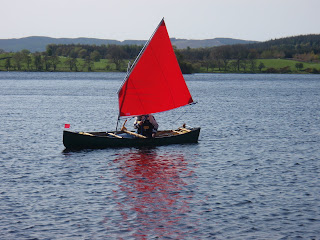 Dave S sailing his canoe with Expedition Rig, pivoting leeboard and side mounted rudder.
The folks who'd set out on the ill-fated trip to the end of the loch decided to stay in the vicinity of the centre as they'd have the added security of the GAC safety boat (access to which was included in the launching fee we'd all paid). A sensible decision in the circumstances.
I had a lazy day basking in the sun, watching the action on the water and chatting. The wind didn't drop at all so I didn't venture out in my canoe but I did have a quick go in a Solway Dory Shearwater decked sailing canoe which was great.
In the evening everyone went to a local hotel for dinner which was really nice then  some of us sat around chatting until bedtime.
Sunday morning saw lighter winds so Stephen and I rushed out for a sail. I sailed backwards and forwards across the loch but staying close to the centre in case the wind picked up again as forecast. Other folks were heading off on trips to either ends of Loch Ken and hoping for more luck with the conditions than the previous day. After a while I felt the wind starting to build again with some fierce gusts blowing through. Time to get off the water for me then! I set about packing up my camping gear as I had to head home on Sunday evening but left my canoe on the shore ready to go in case the wind moderated again. 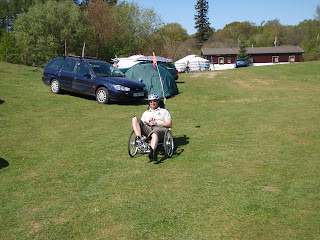 Some folks had brought other toys to play with!
By mid afternoon the wind was still blowing really strongly so I decided to pack up my canoe as well. I wanted to wait for the Solway Dory guys to get back from their trips though so that we could discuss them modifying my sail by adding some reefing points to it.
Eventually the group who'd set off for the northern end of the loch (which included Dave Stubbs from SD) came back into sight tacking back up the loch against a ferocious headwind. 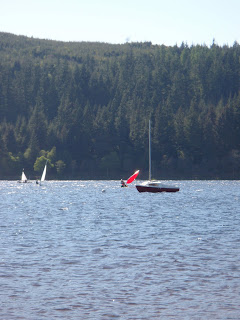 Dave S beating back to the centre with his Expedition Rig being pushed to it's limits! 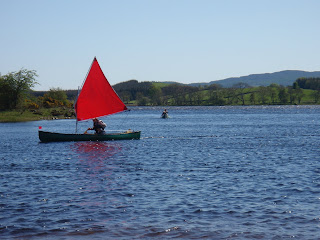 Eventually he made it back safely. 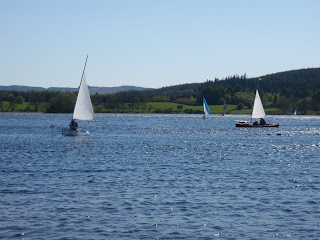 Closely followed by Steve and Keith and Anne. It turned out that Paul had snapped the mast in his Peterborough canoe and the conditions had been pretty extreme.
I had a really interesting chat with the two Daves and gave them my rig to carry out the modifications I wanted (they would post it back to me on completion). It only remained to say my farewells before hitting the road to drive home. It had been a great weekend despite the limited amount of time I spent sailing. I learned loads whilst chatting to various OCSG members and looking at their canoes and it was good to meet some new people and puts some faces to names. I look forward to the next OCSG meet I'm able to attend.
Posted by Chris at 14:44 No comments: