For all the cows.


This last weekend I'd hoped to be paddling my sea kayak into Barrisdale in Knoydart to meet up with Rich (Shewie) and Pete who are walking the Cape Wrath Trail over the next few weeks and while I was there taking the opportunity of bagging a couple of Munros that I haven't done. Alas, work intervened again cutting my four days off down to two (which wouldn't have been enough time for that plan). Instead I decided to finally try to get to an island at the northern end of Loch Lomond that I've been intending to visit for ages.
Island I Vow (or Ellan Vhow or  Eilean a' Bhò  as it's also known) is a small island that's not very obvious from the main A82 road but it has the remains of a castle on it that was once home of the clan MacFarlane. The MacFarlanes were known for cattle rustling and there is speculation that the abductees would often be hidden away on the island (one theory is that the islands name stems from a translation of "Island of the Cow" because of this). The castle was built by the MacFarlanes to replace their original stronghold on Inveruglas Isle which was destroyed by Oliver Cromwell's army in 1654 (due to the clan's loyalty to the Stuart cause).
The two day window of opportunity that I had would be plenty of time to launch at Tarbet and paddle sail north to Island I Vow, camp nearby and return the next day. It was also a great chance to try out a new smaller 25sq ft Solway Dory Expedition Rig that I've recently acquired in a bid to get back to basics with my plastic canoe.
After faffing about on Saturday morning I finally set off to drive to Tarbet after lunchtime. I'd hoped to park at Tarbet pier but the car park was full so I carried on north a little way and was lucky to get a space in a lay by just opposite Tarbet Isle. I got on the water as quickly as I could but it was still almost three by the time I got going. I put the sail up straight away but the wind was light and variable so I ended up dropping it again and paddling across to the eastern shore to get away from the traffic noise. 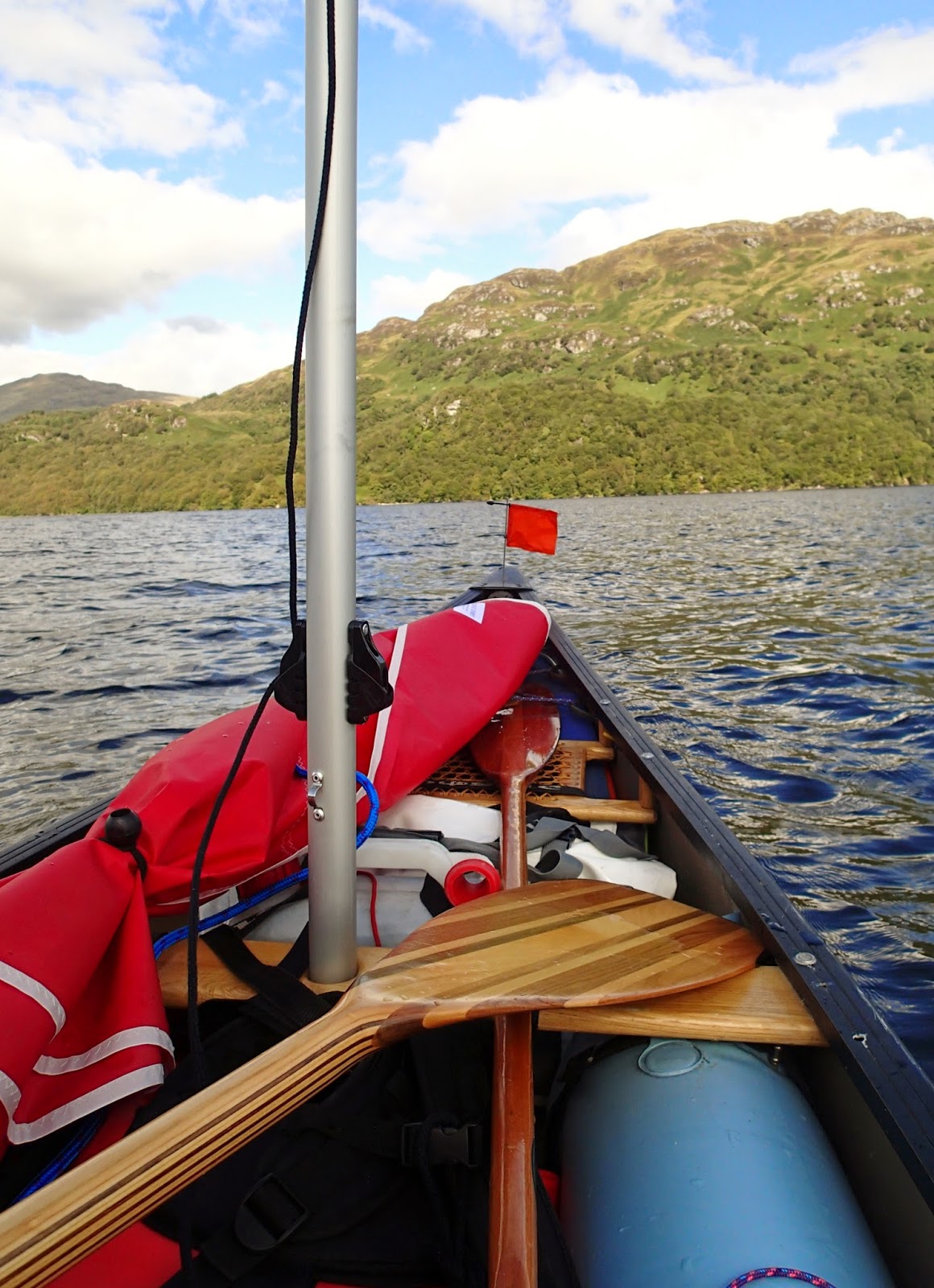 Once across the loch the wind freshened from the north west and I was able to paddle sail again. The new rig performed just as I'd hoped it would, giving decent ability to windward while having less heeling effect than the taller bermudan rig. In pure sailing terms it lost out a little in terms of how high into the wind it would point but for sailing without a rudder it felt very benign and manageable and the paddle strokes used for steering made up a little for the slightly reduced performance. 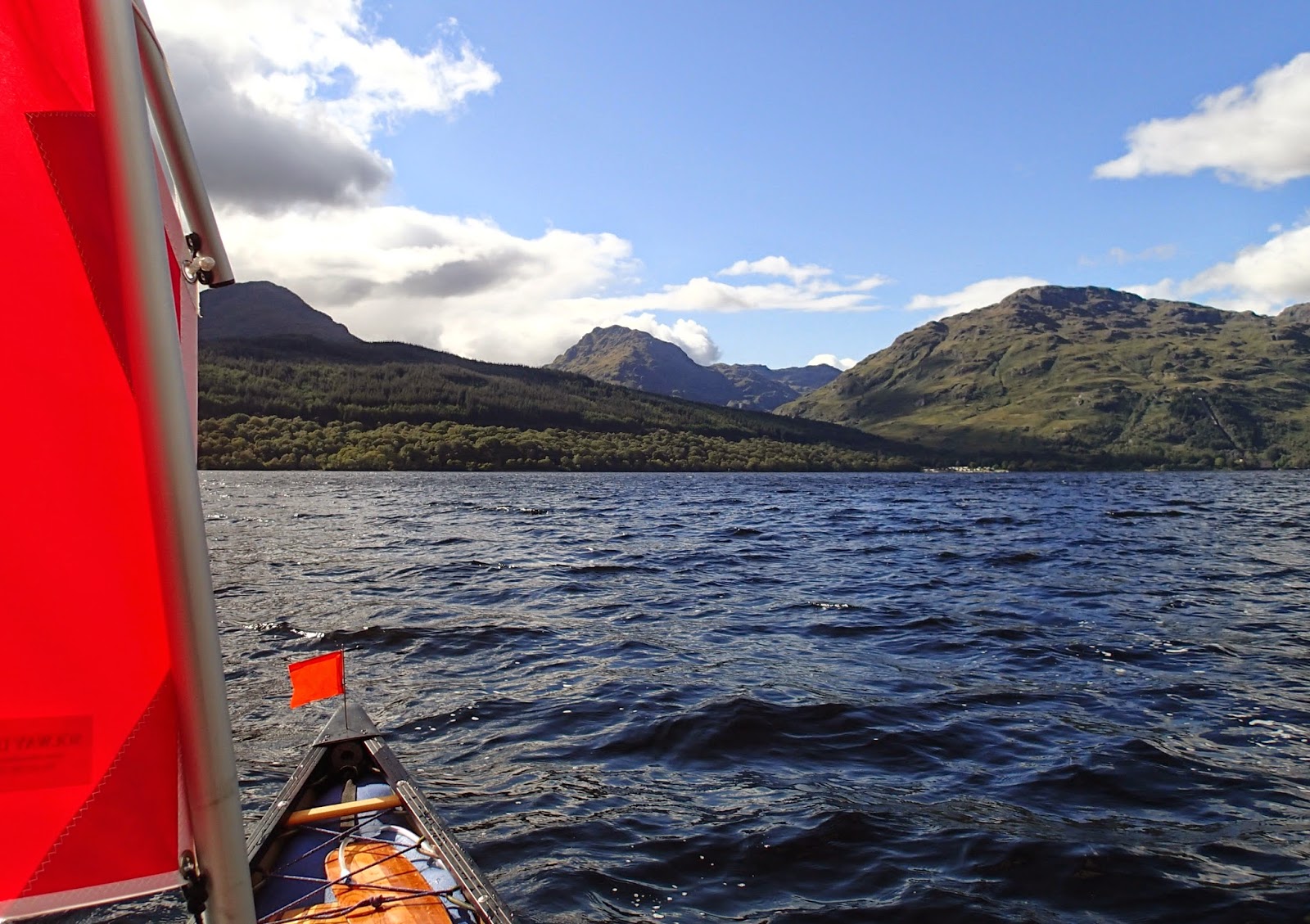 As time went by the wind continued to freshen giving exciting, splashy sailing conditions that necessitated more athletic efforts to maintain an even keel. 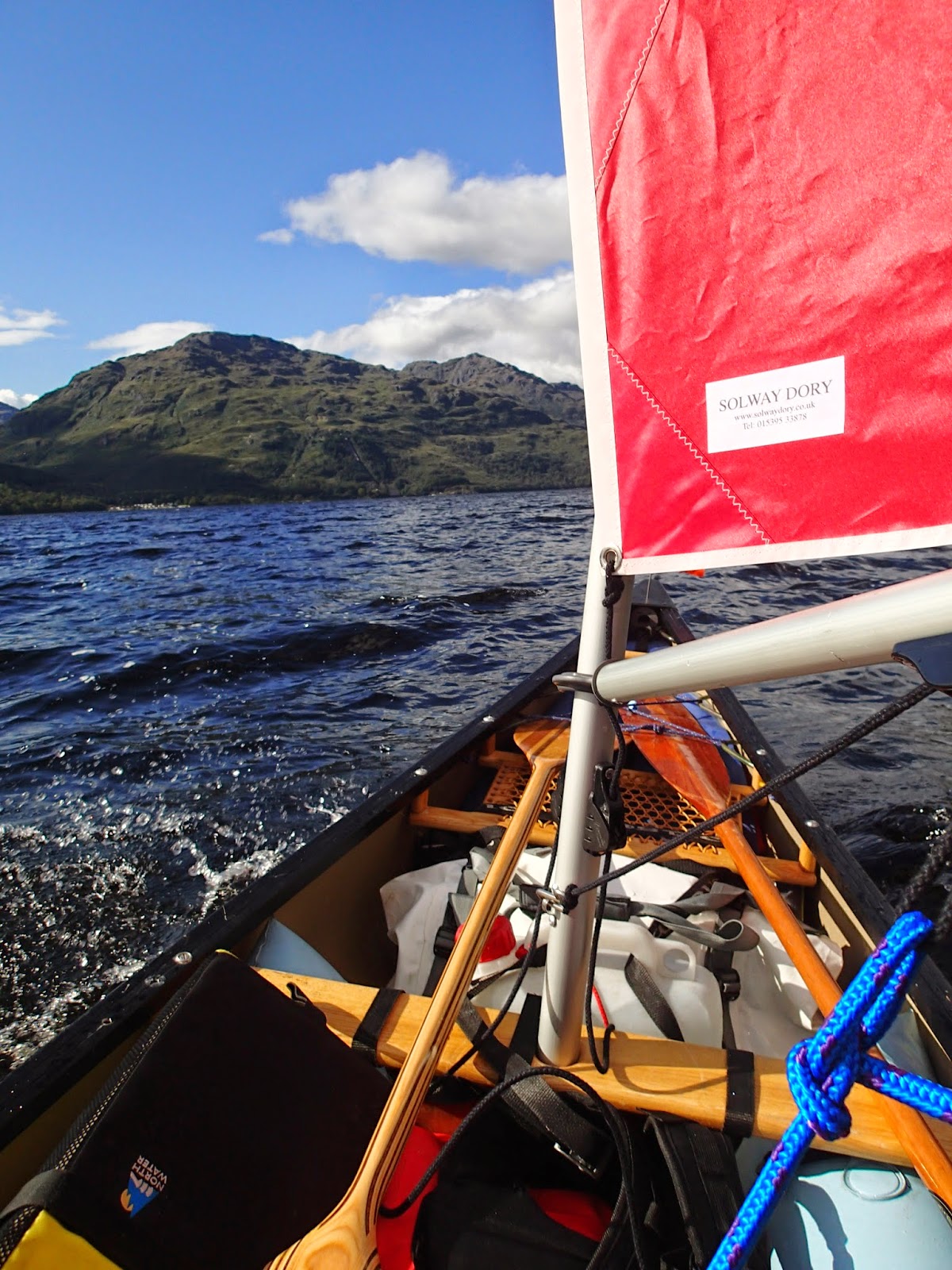 The sailing was great fun but quite strenuous. The wind strength peaked as I drew level with Inversnaid and I felt that I needed to stop for a stretch of the legs and to reassess. I landed at Inversnaid boathouse where there is an informal campsite used by people walking the West Highland Way. 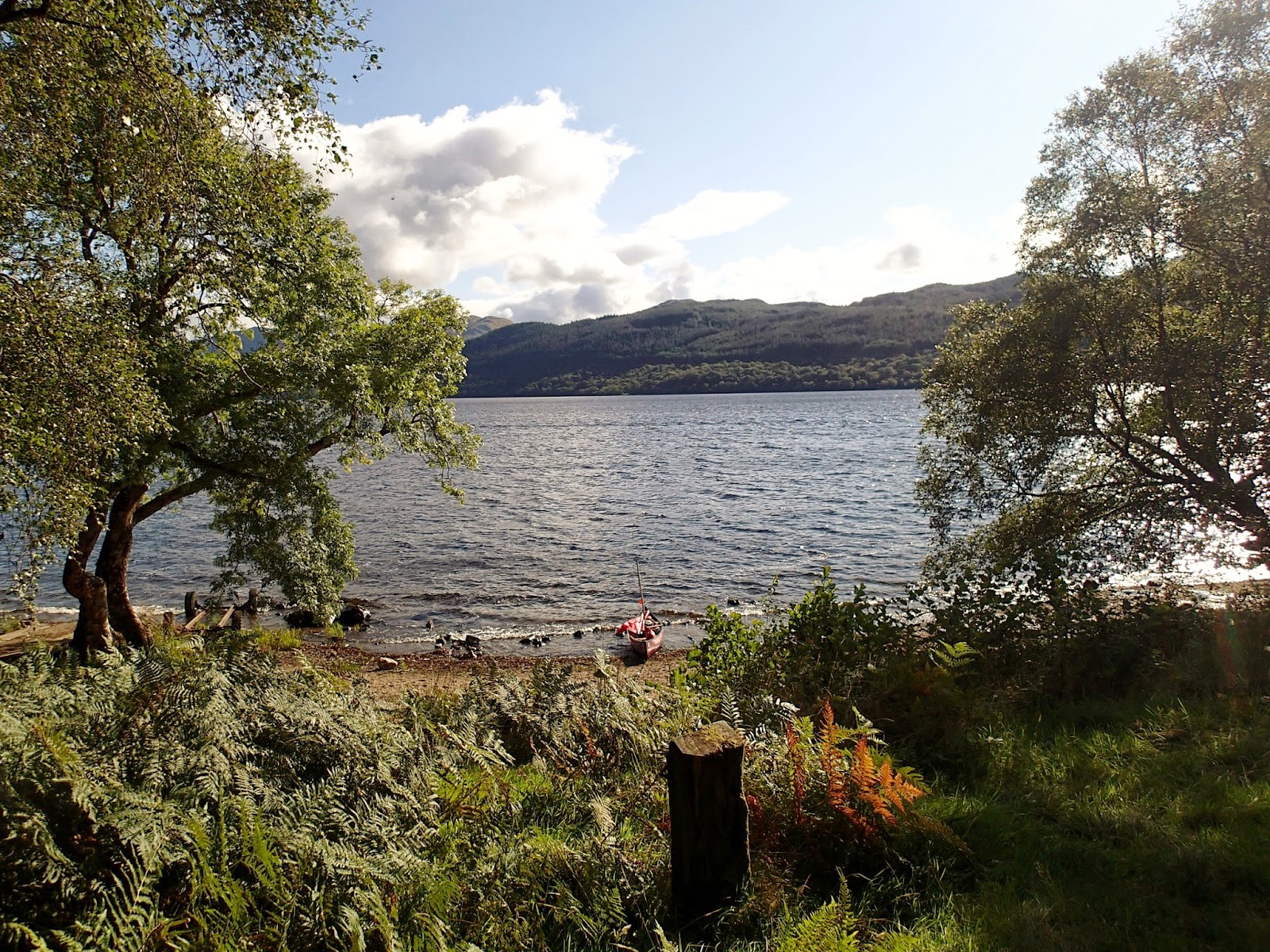 I had a drink and a rest and pondered my options. I could camp at Inversnaid and try to reach Island I Vow the next day or I could push on. The wind was quite strong now with squally spells of F4 and  wind blown chop that had seen a few waves come over the side of the canoe and a few sketchy moments and it was already six o'clock in the evening. Against that, stopping would leave a lot to do  the following day and may lead to a failure to reach my destination. I studied the map and realised that it was only another two miles to the island. That settled it, I decided to drop the sail and paddle the next section of the loch that ran past some steep rocks that swept straight down into the water leaving no place to land. It would be hard work but at least I wouldn't be risking a capsize and if it was too hard I could turn round and run back down wind back to Inversnaid. I dropped the rig (mast and all) which stowed easily in the canoe and set off paddling hard. I had to "switch," that is paddle a couple of strokes on one side of the canoe then a few on the other rather than paddling on one side as I normally do. This technique is more efficient but not as elegant but was necessary to make any headway into the wind. I gradually rounded the rocky section that I'd been worried about and the wind began to moderate a little so I landed briefly and put the sail back up, anything for a bit of help! Eventually the island came into view in the distance (visible in the pictures below). 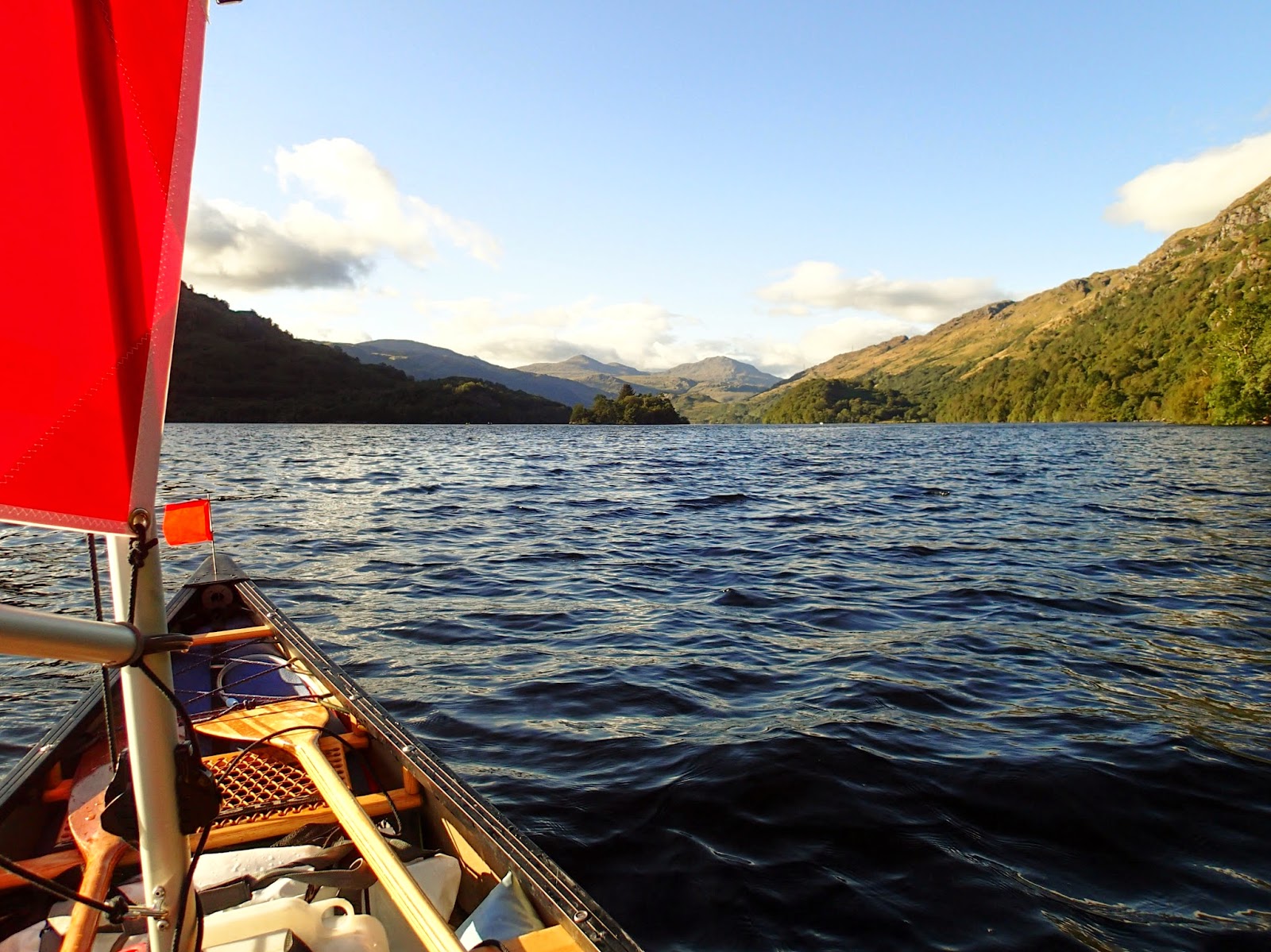 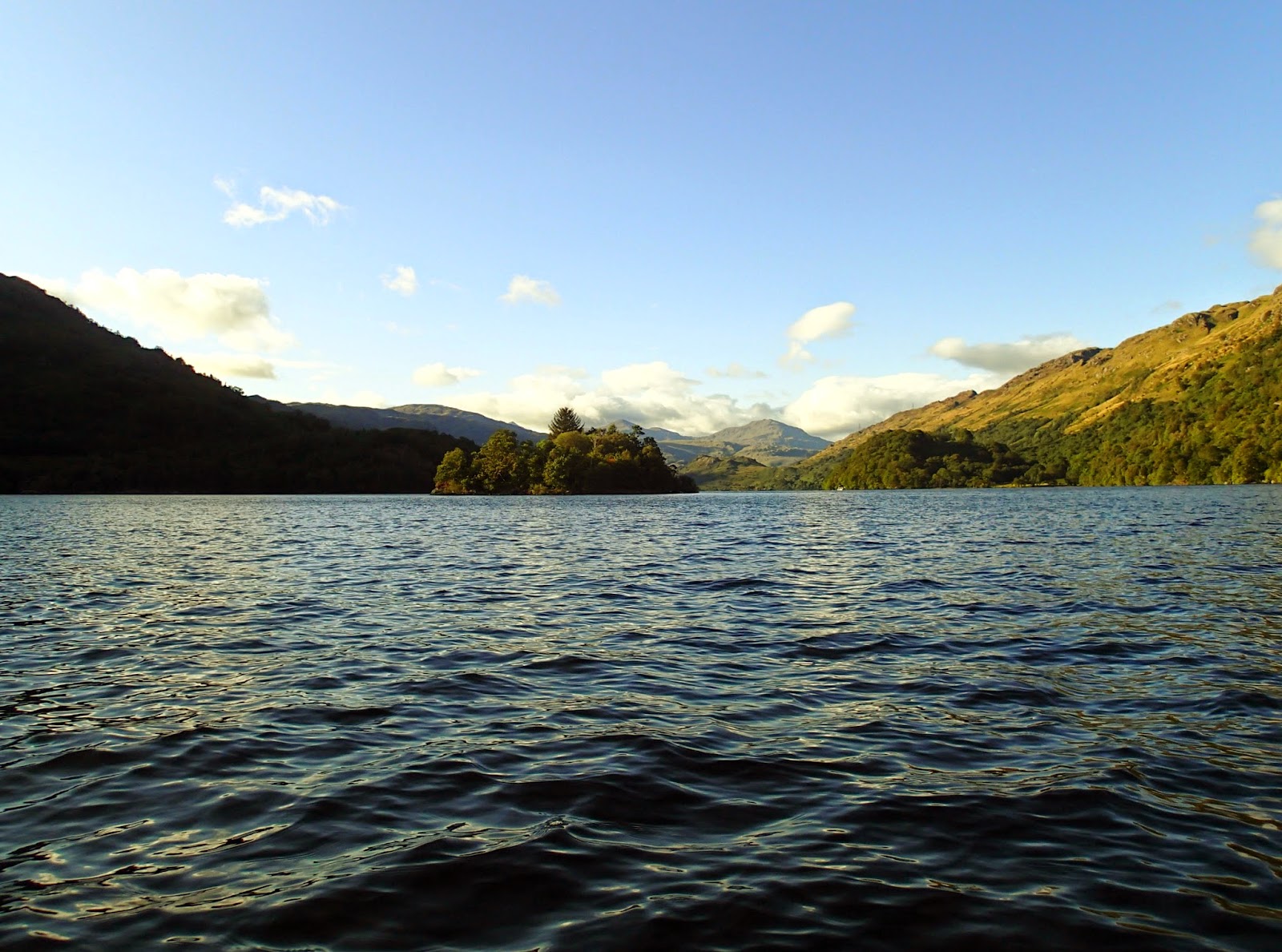 My thoughts turned to setting up camp, I'd thought that I'd camp on the shore just north east of the island where I knew there was a beach and flattish meadow but I couldn't resist landing on the island first for a look. 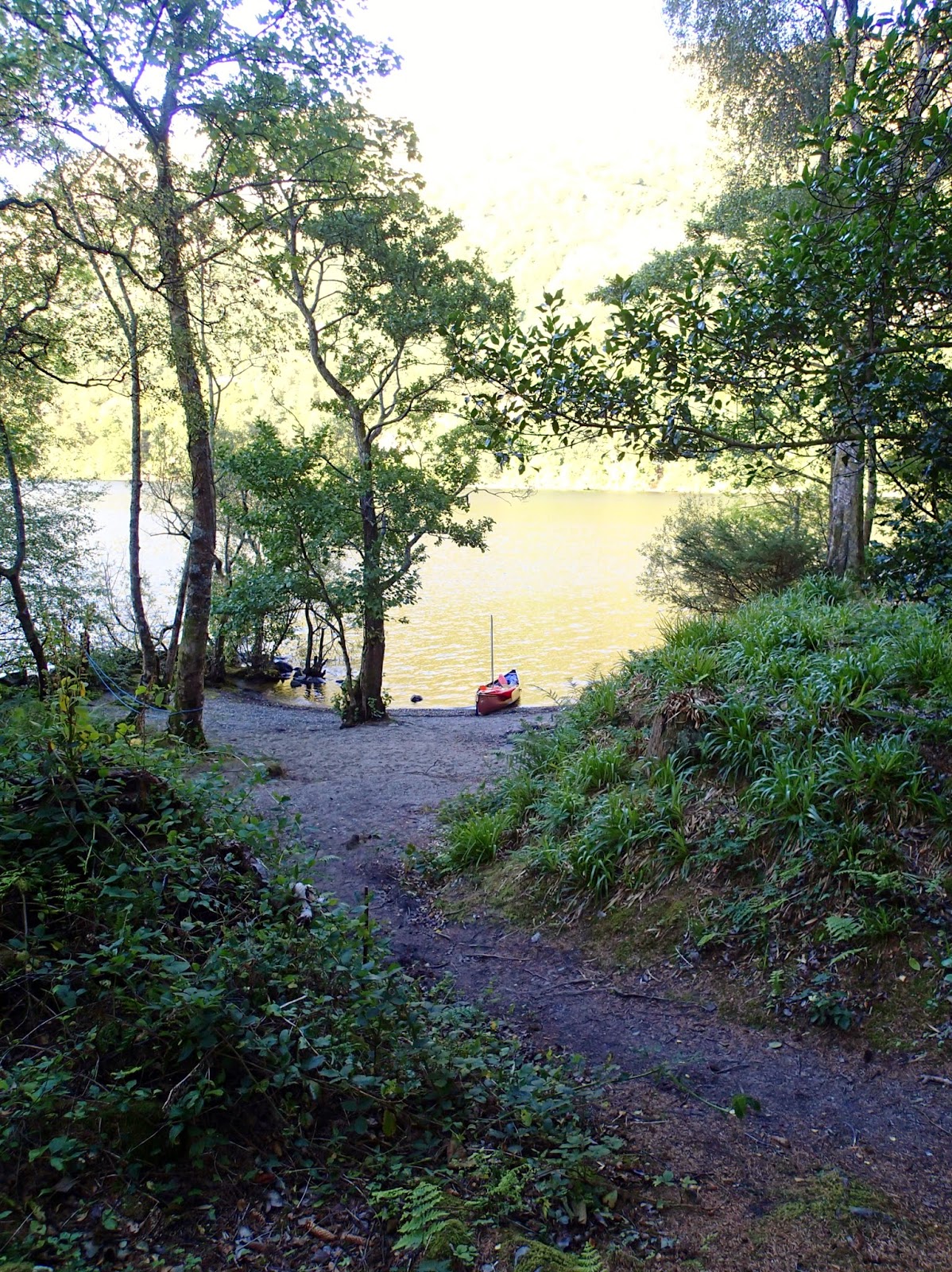 What greeted me was a perfectly level campsite in the interior of the island just a little way from the castle and I had the island to myself. Furthermore I could see some speed boats beached at the meadow that I'd intended using so I decided to camp on the island. Setting up camp took second place to exploring the castle remains though. 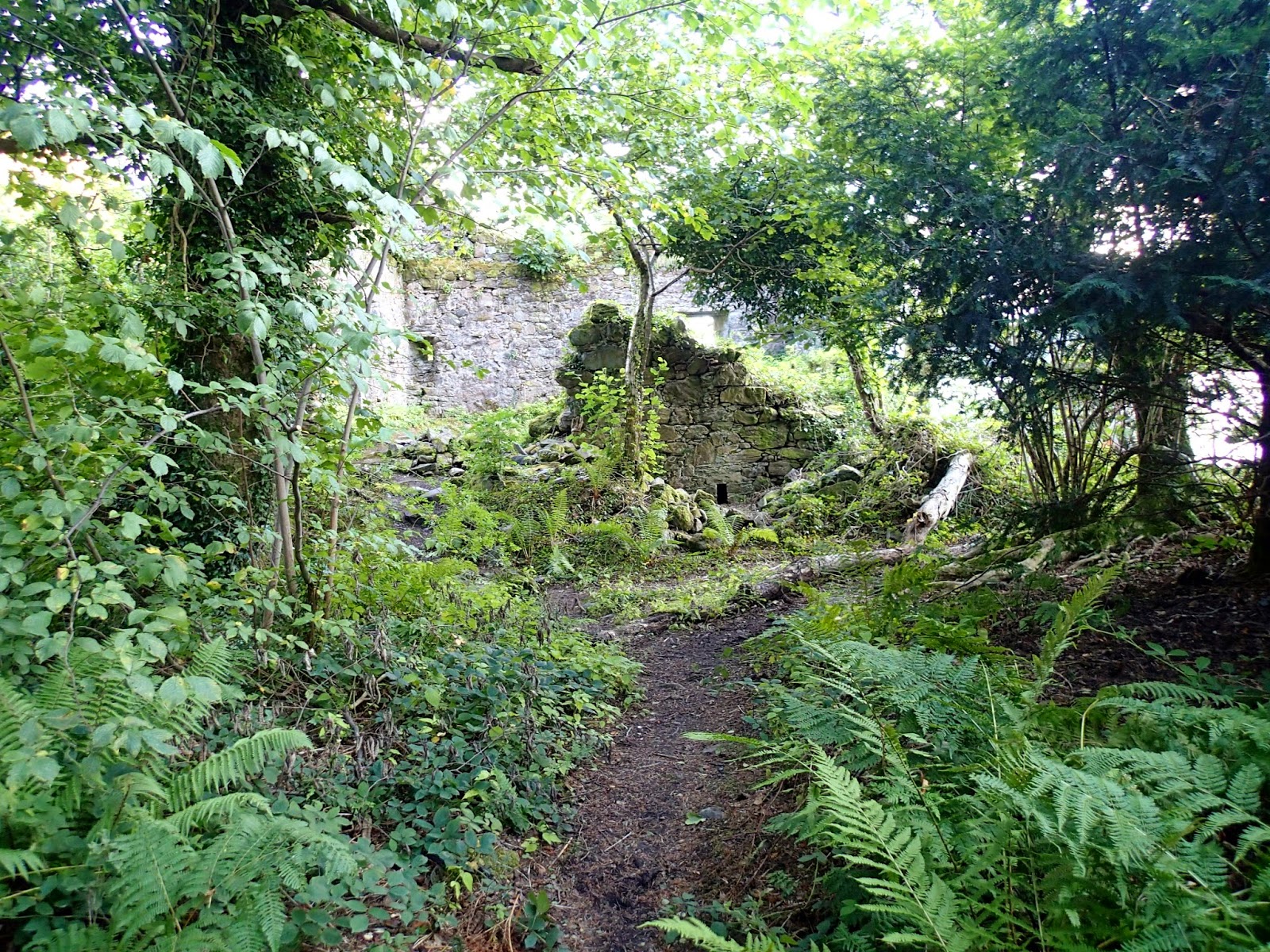 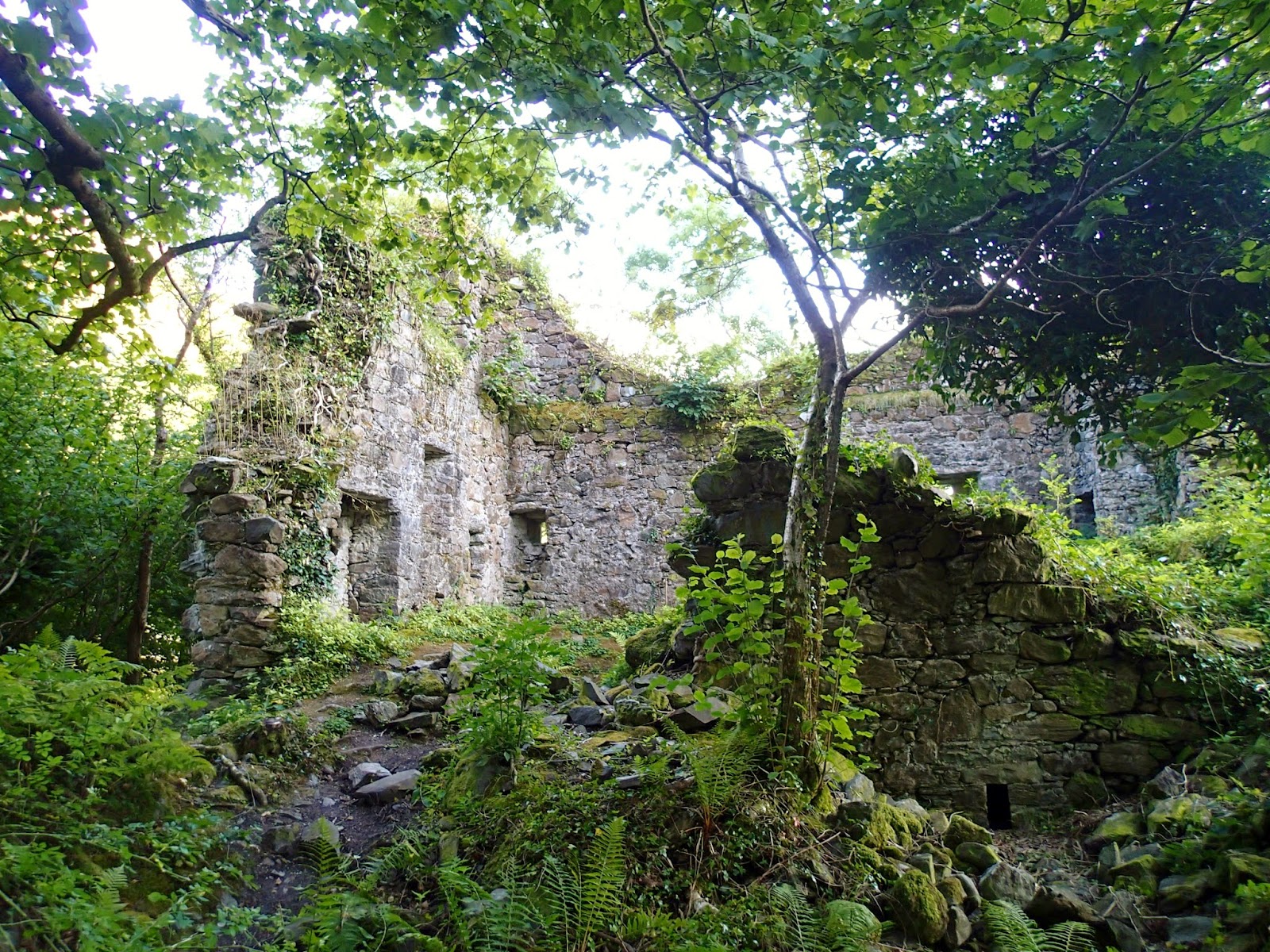 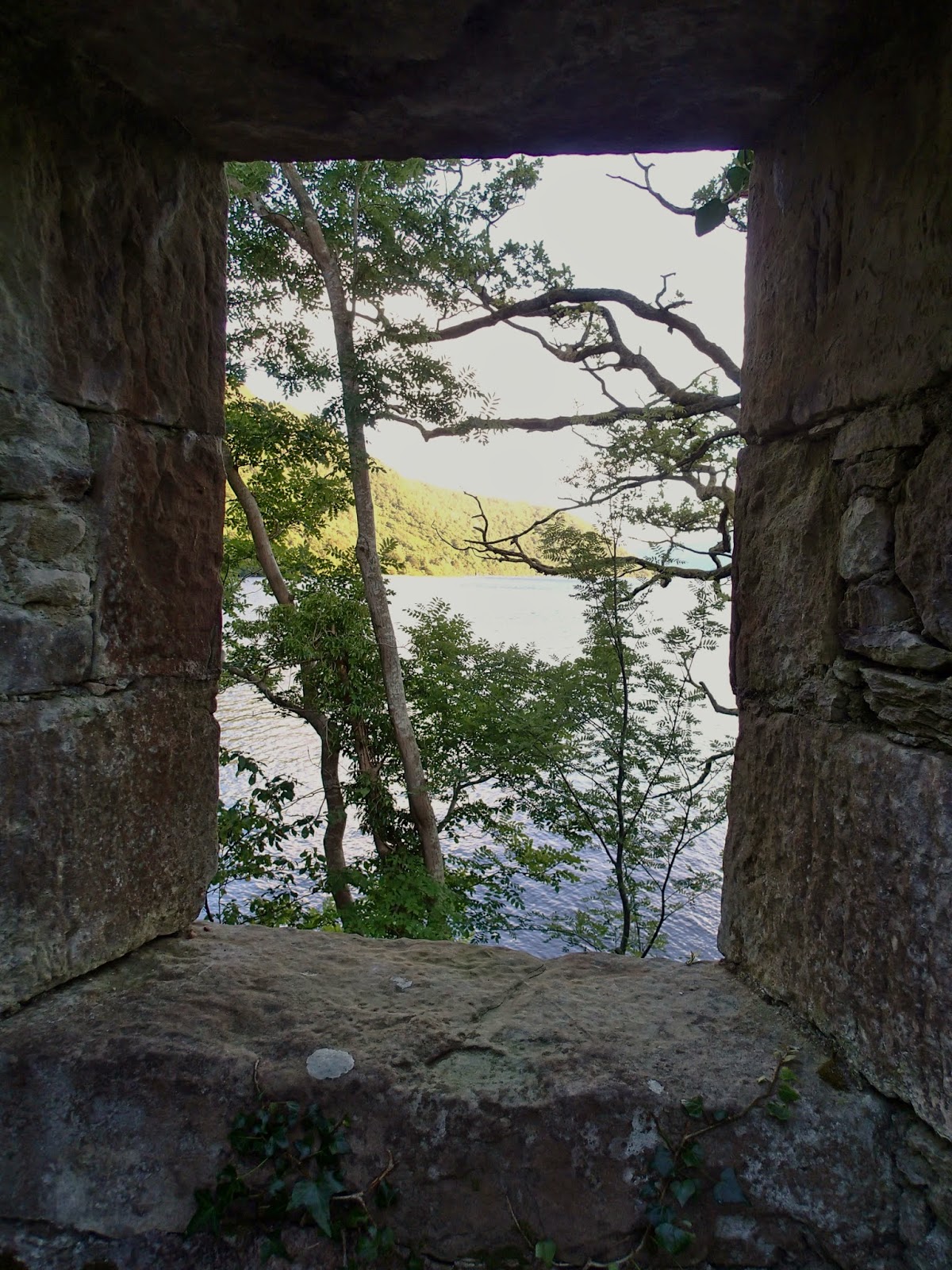 I'd read about the dungeon and the entrance was immediately apparent, I couldn't resist a look. It was surprisingly dry inside despite the dilapidated state of the castle remains above and I could see why it had been home to a hermit in the nineteenth century. 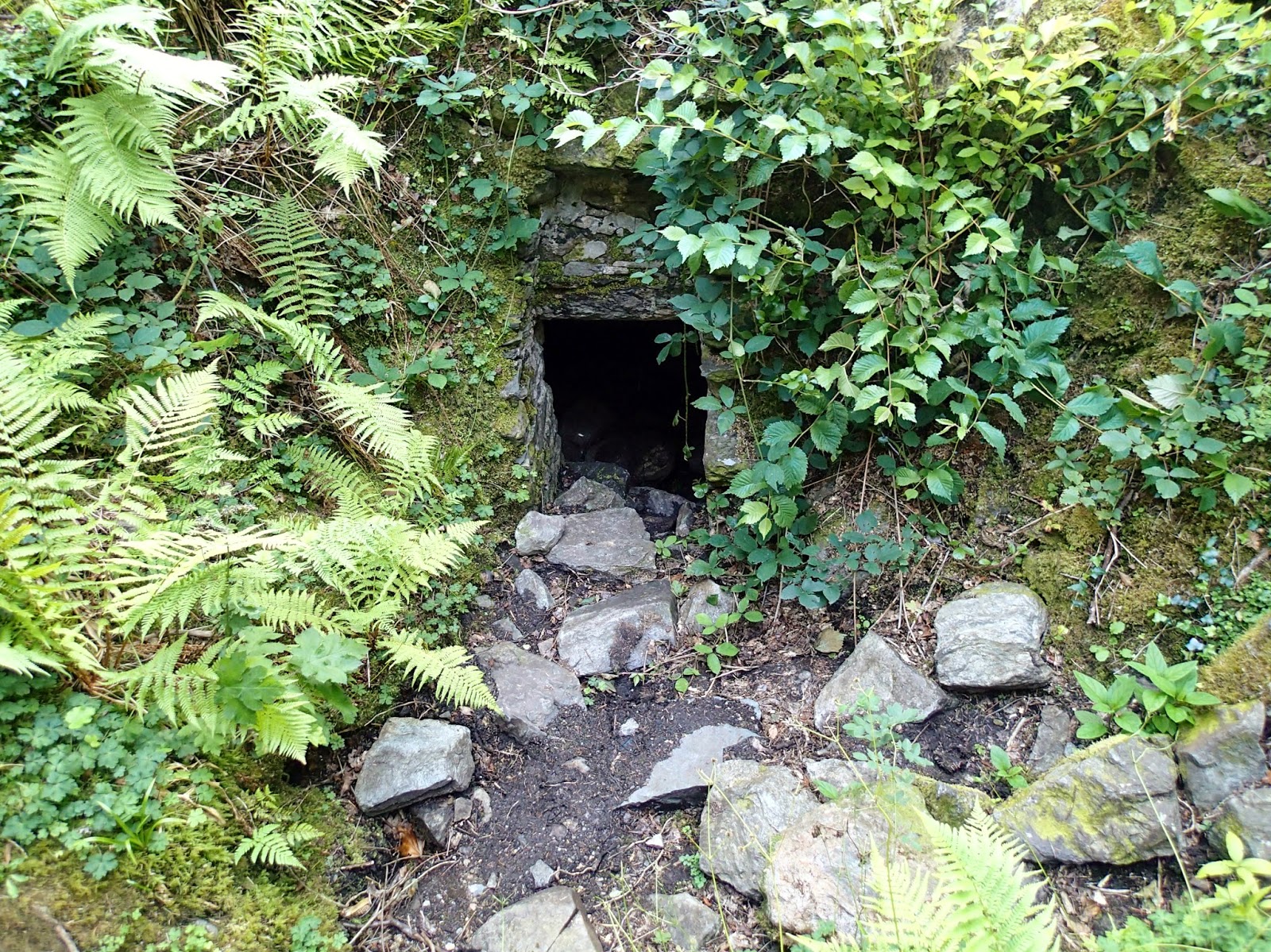 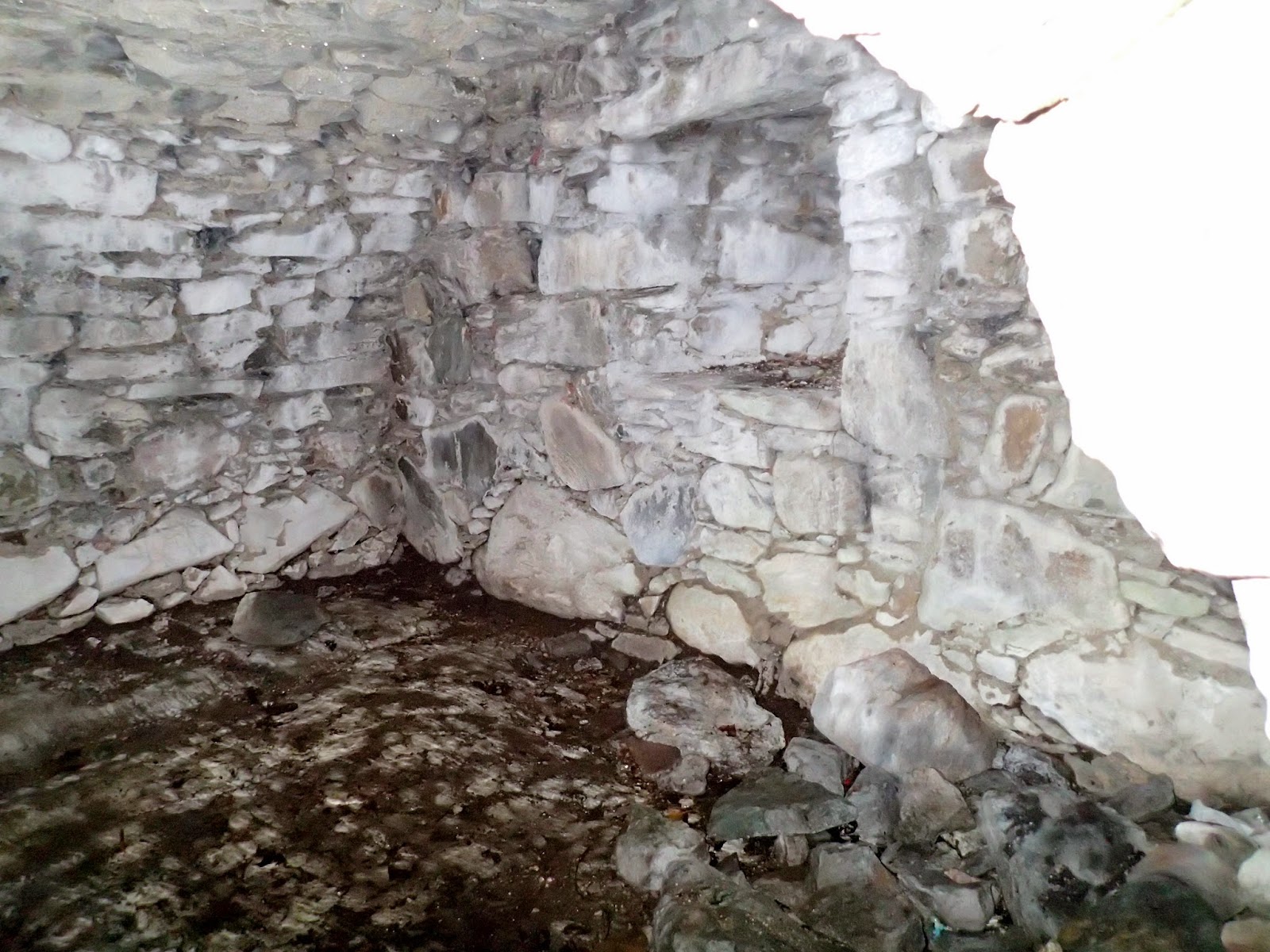 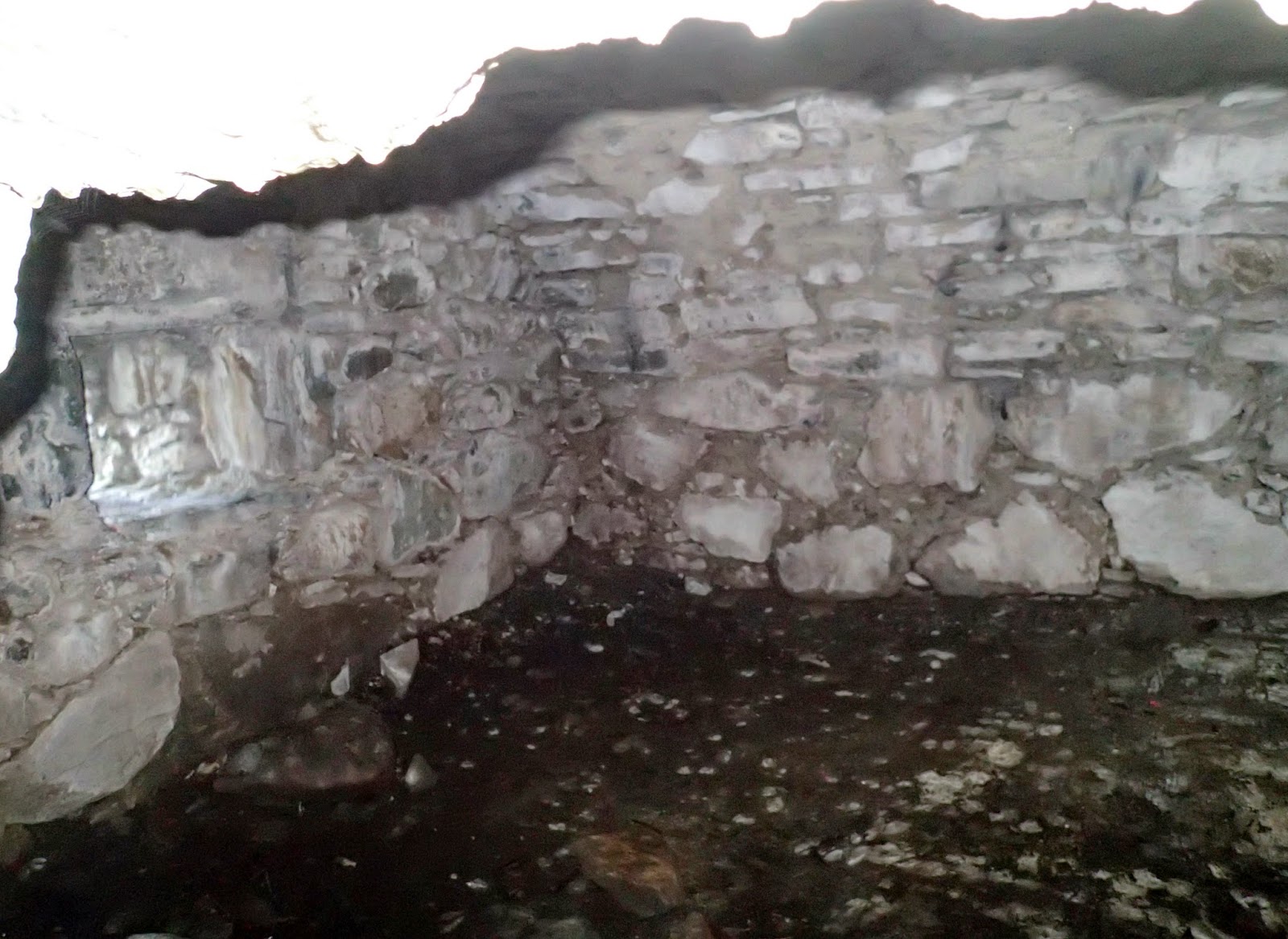 Curiosity satisfied I went back to set up camp and make something to eat before it went dark. 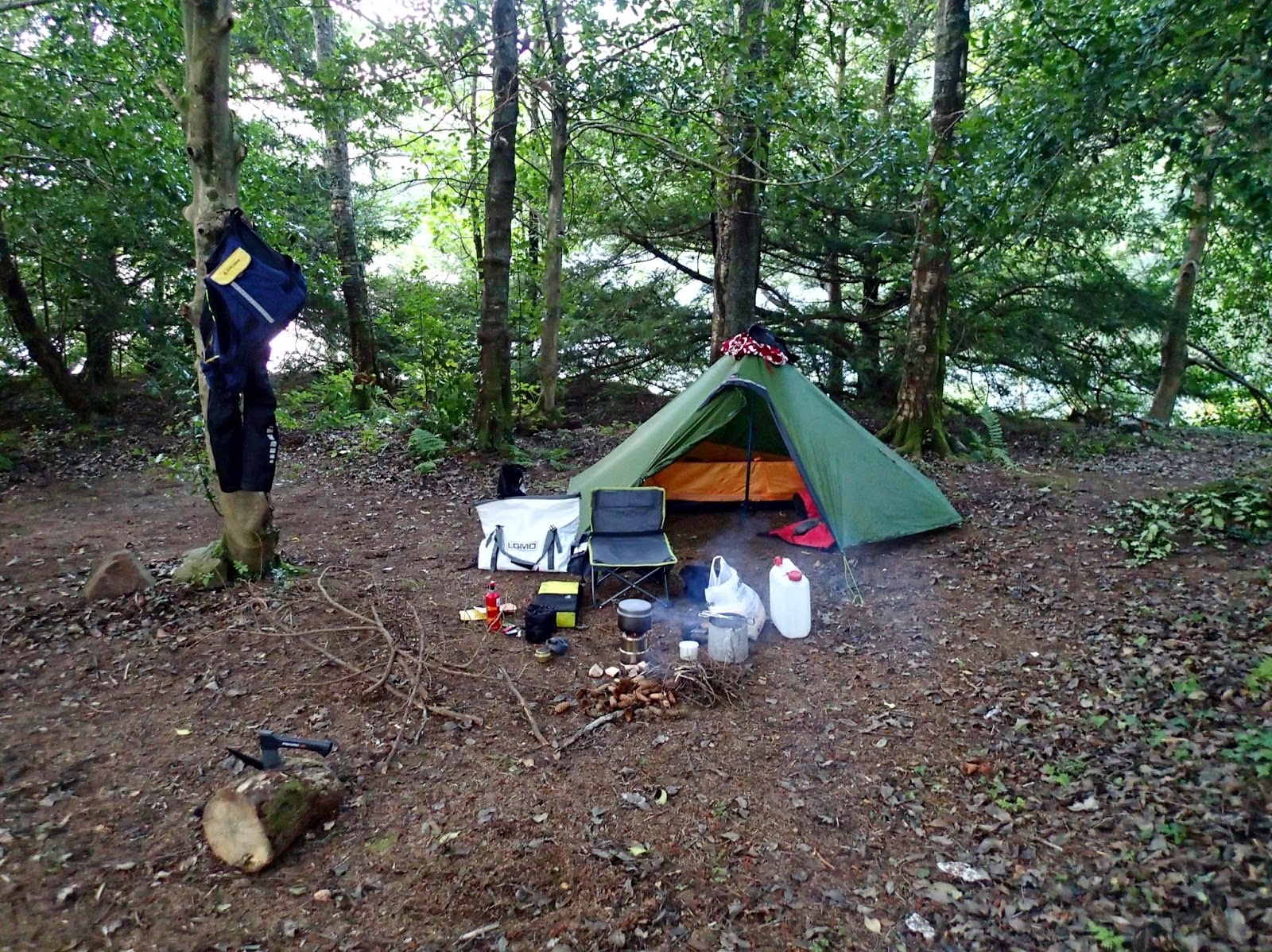 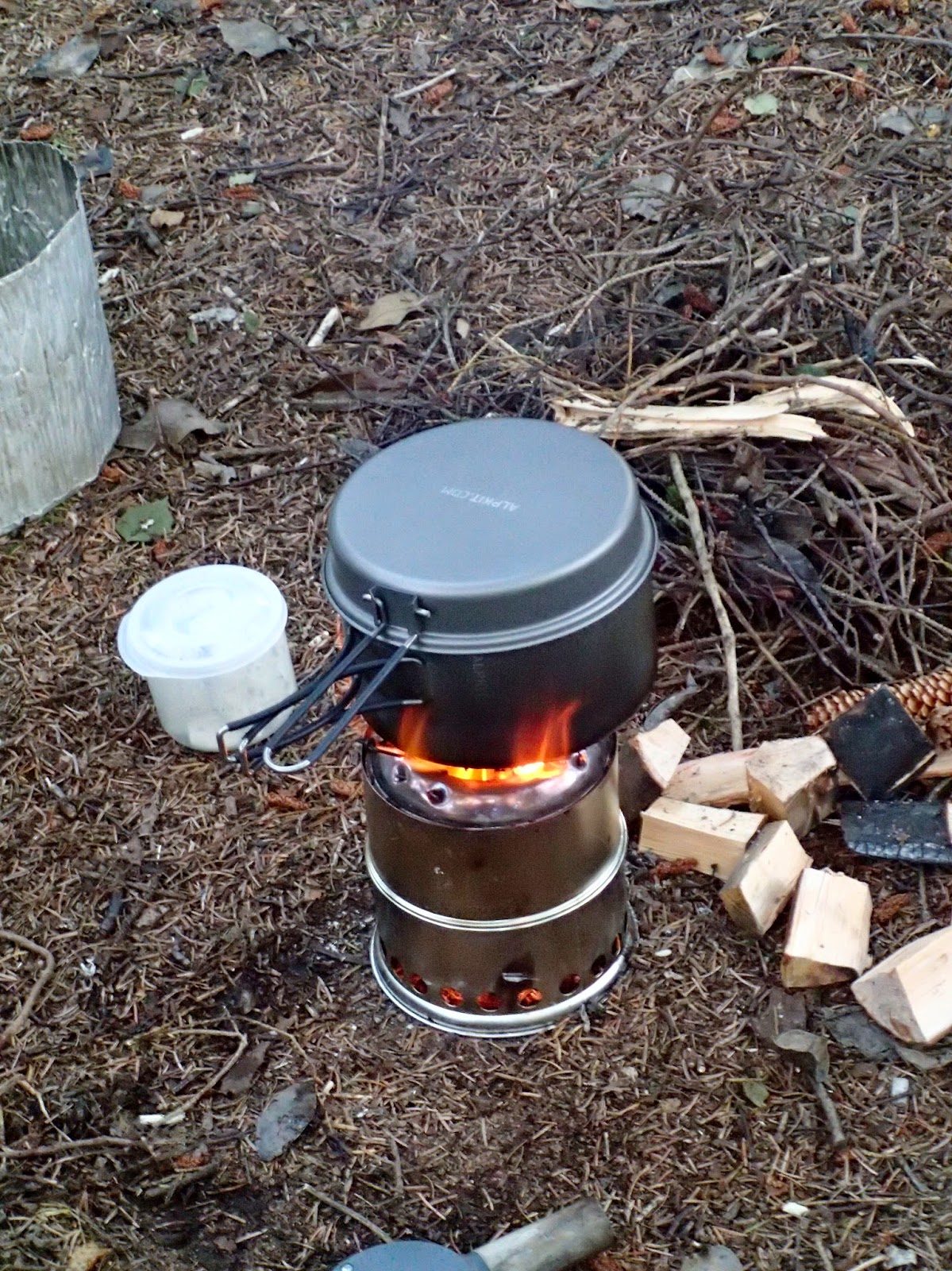 After eating dinner I fed my little woodgas stove with odds and ends of twigs that were lying around  (in lieu of a proper fire) before going to bed.
Having studied the forecast I knew that my best chance of favourable winds on Sunday would be to leave in good time so I rose just after seven. The loch was like a mill pond so I ate breakfast and packed up resigned to the fact that I was in for more paddling. 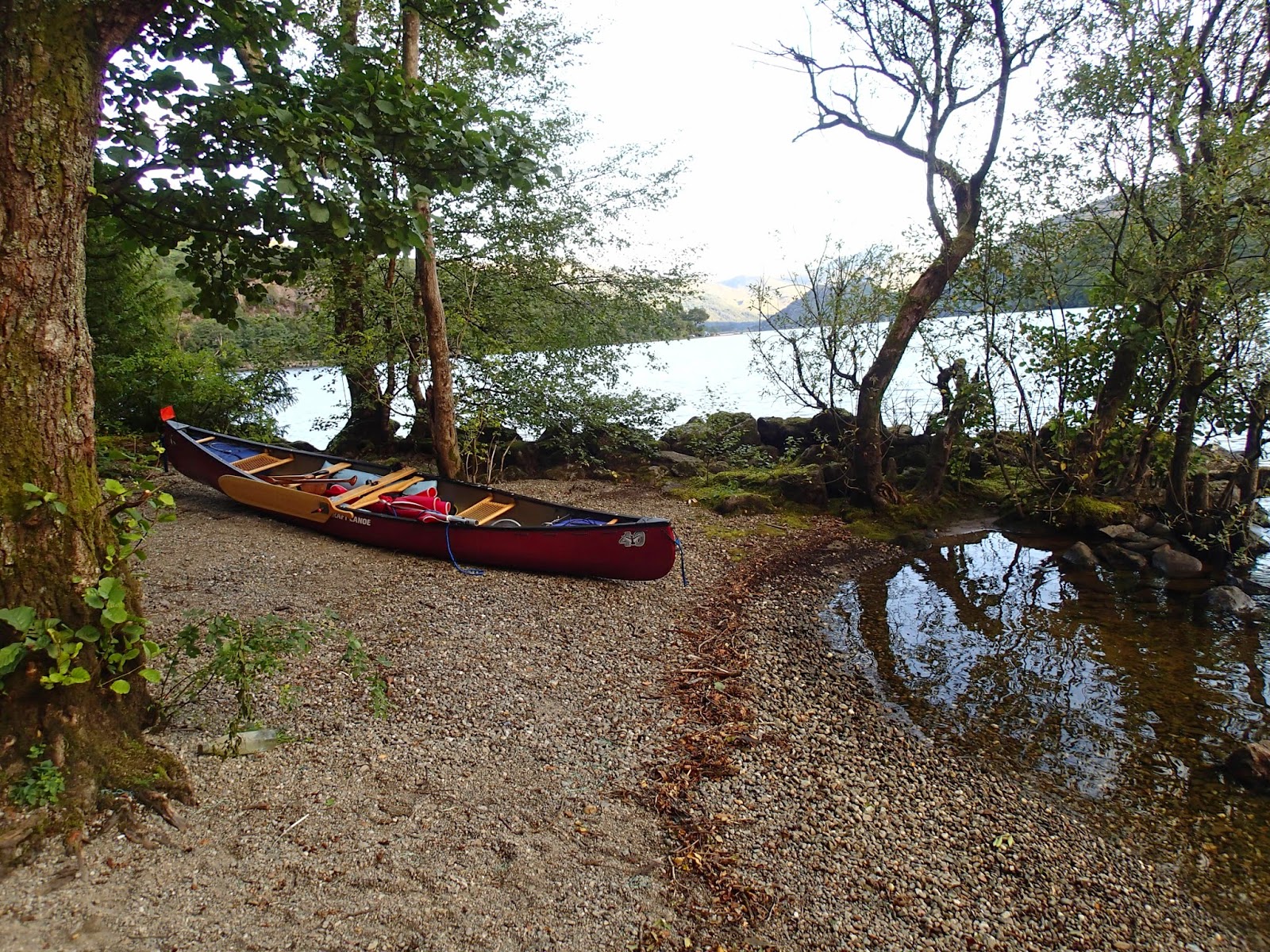 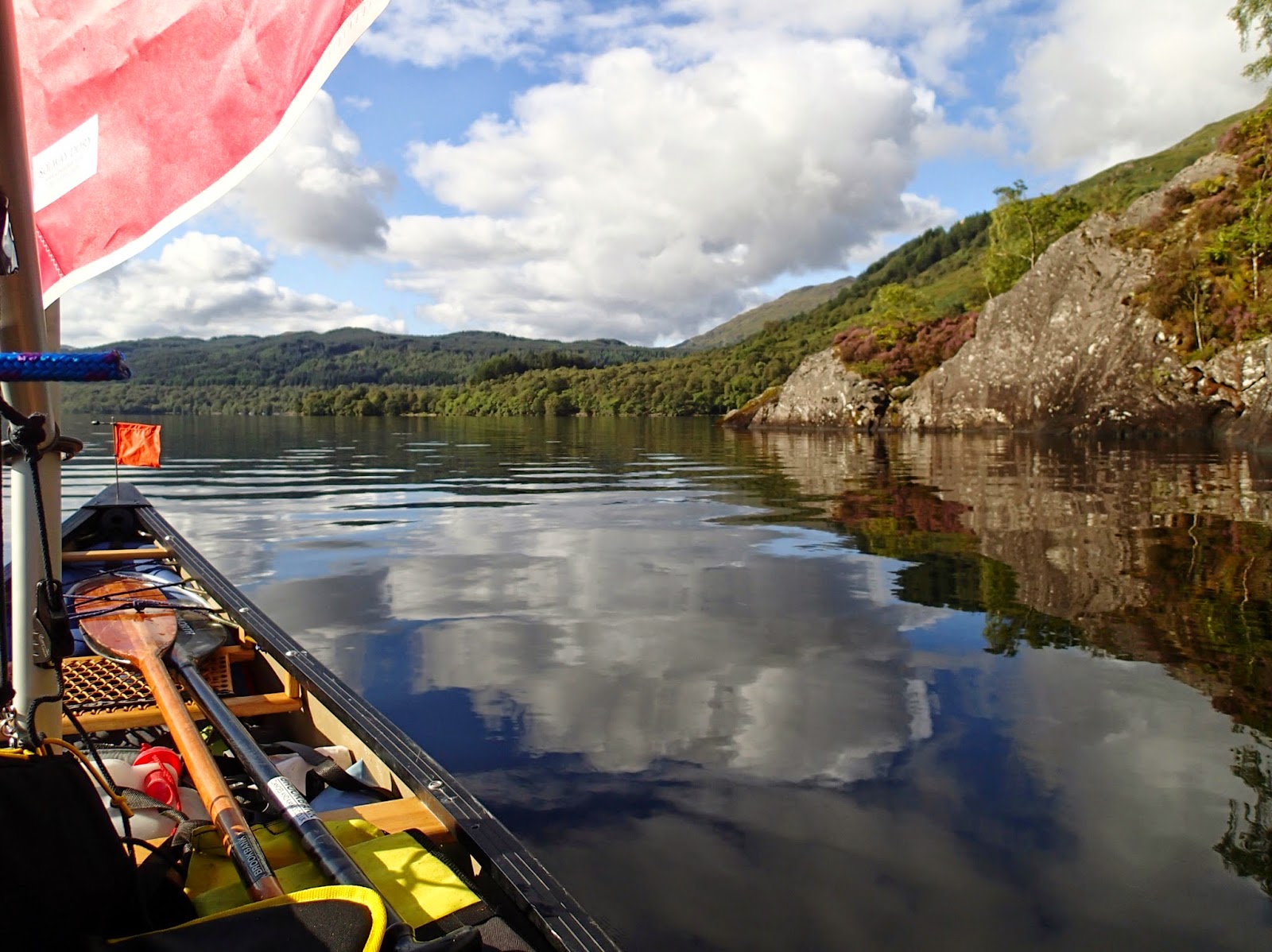 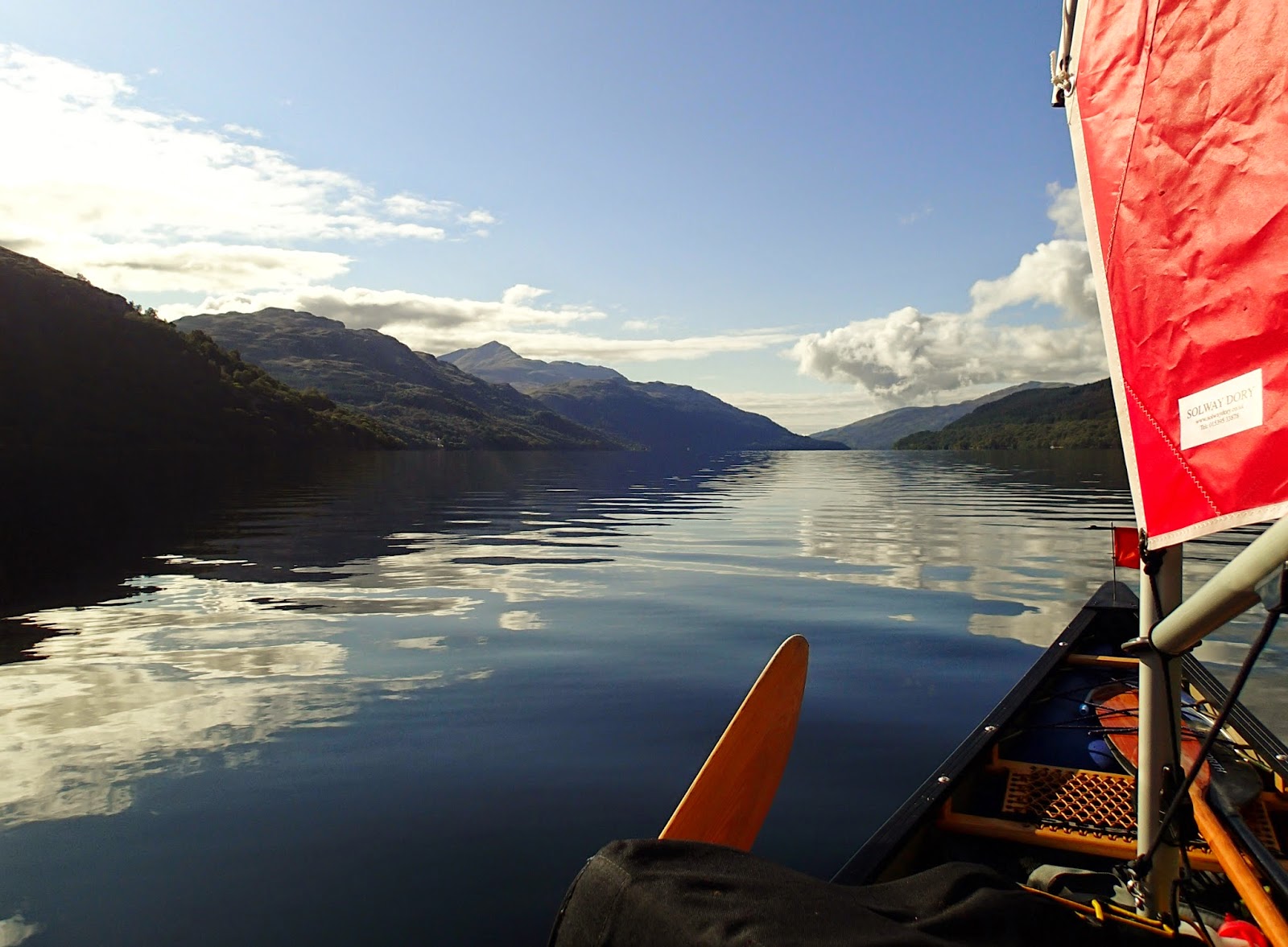 I had the sail up more in hope than expectation but was surprised to note that even in such calm conditions I could still feel a tiny bit of assistance from it. I'd decided to follow the western bank on the way back for a change and were it not for the traffic noise from the busy A82 it would have been a perfect paddle following a series of nice shingle beaches interspersed with pretty little bays. Soon I reached Inveruglas and it's hideous hydro electric power station (and people say windfarms are ugly!) 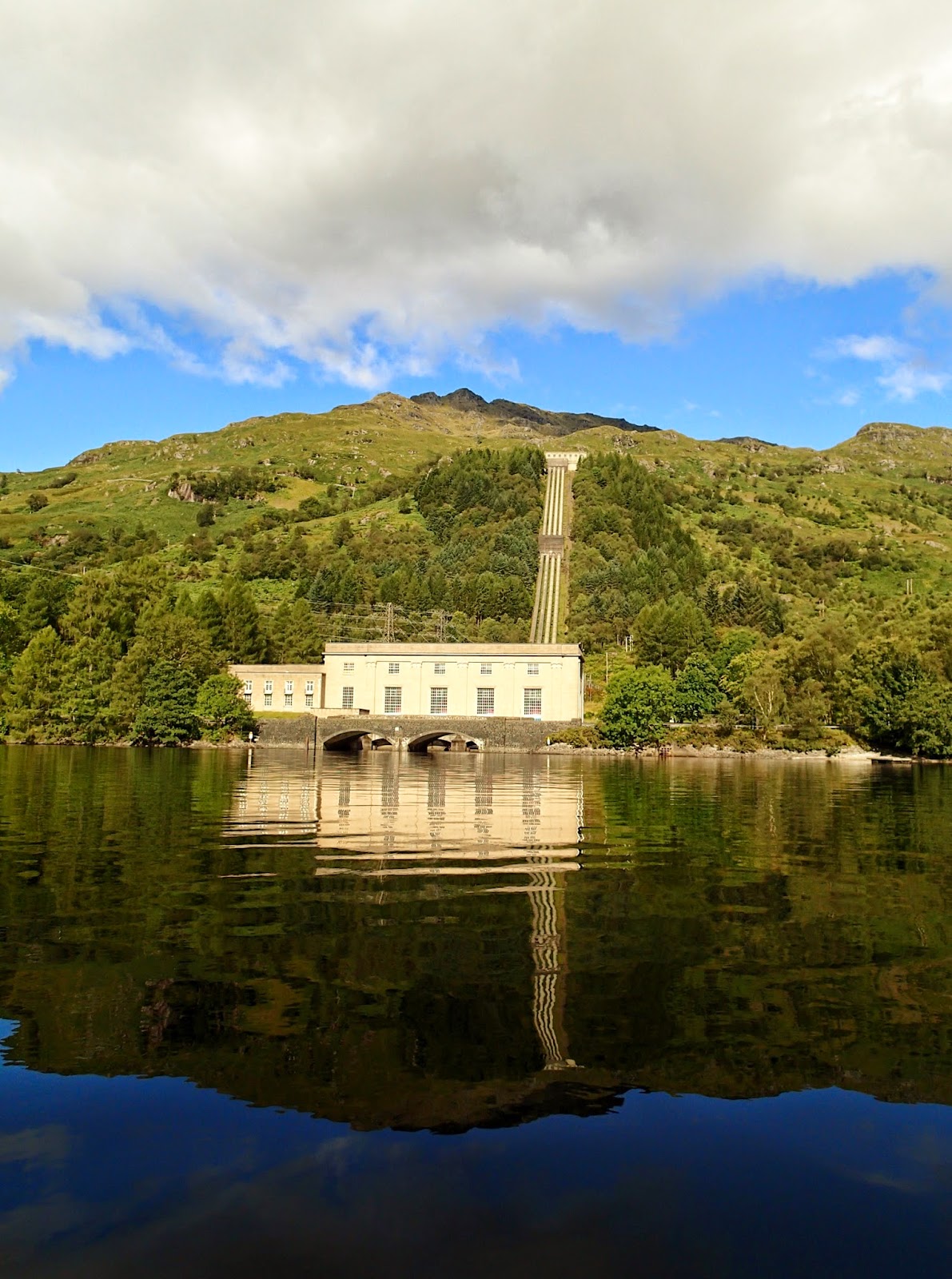 As I was passing I decided to visit the MacFarlanes other castle on Inveruglas Isle for a few minutes. 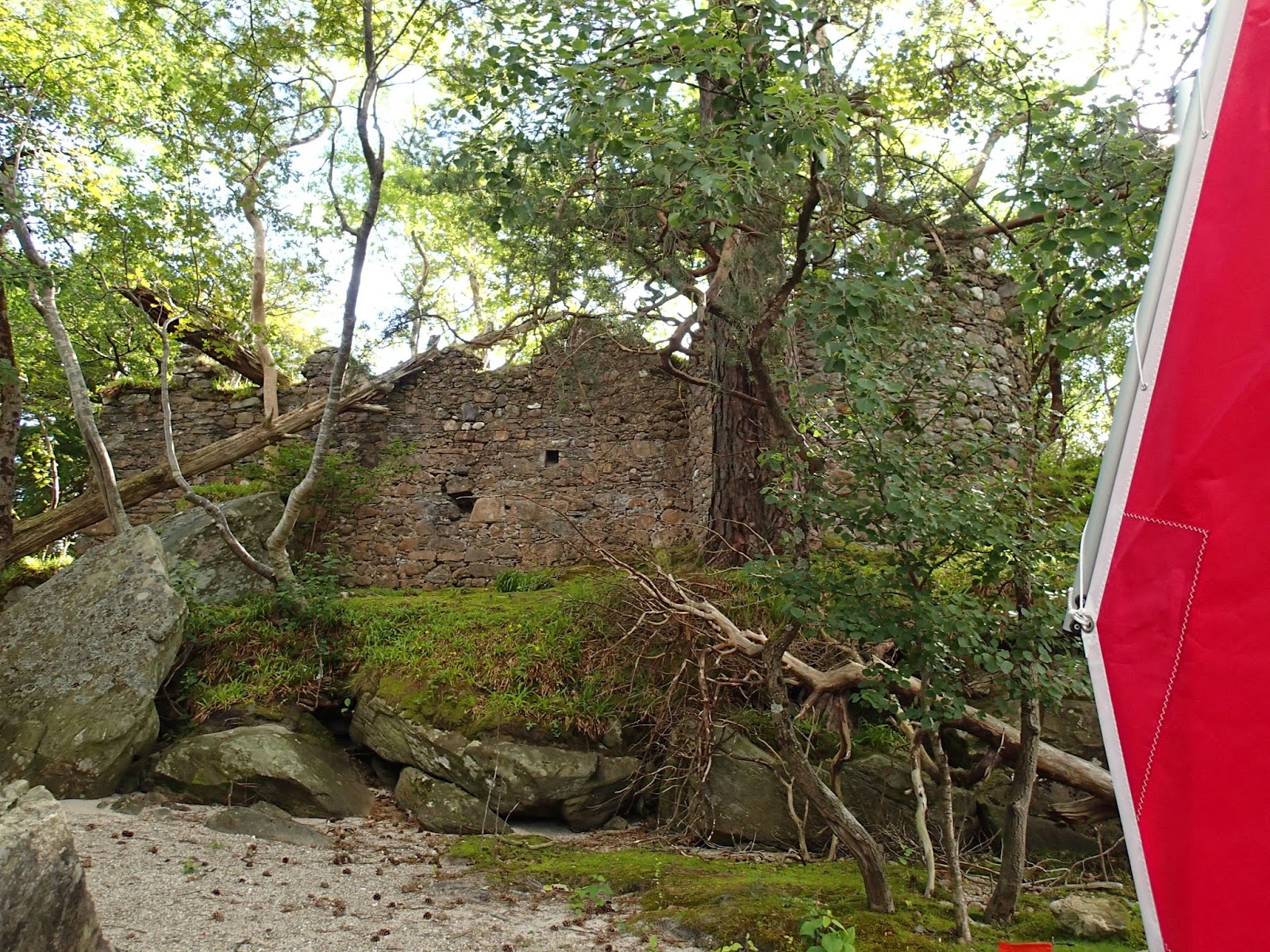 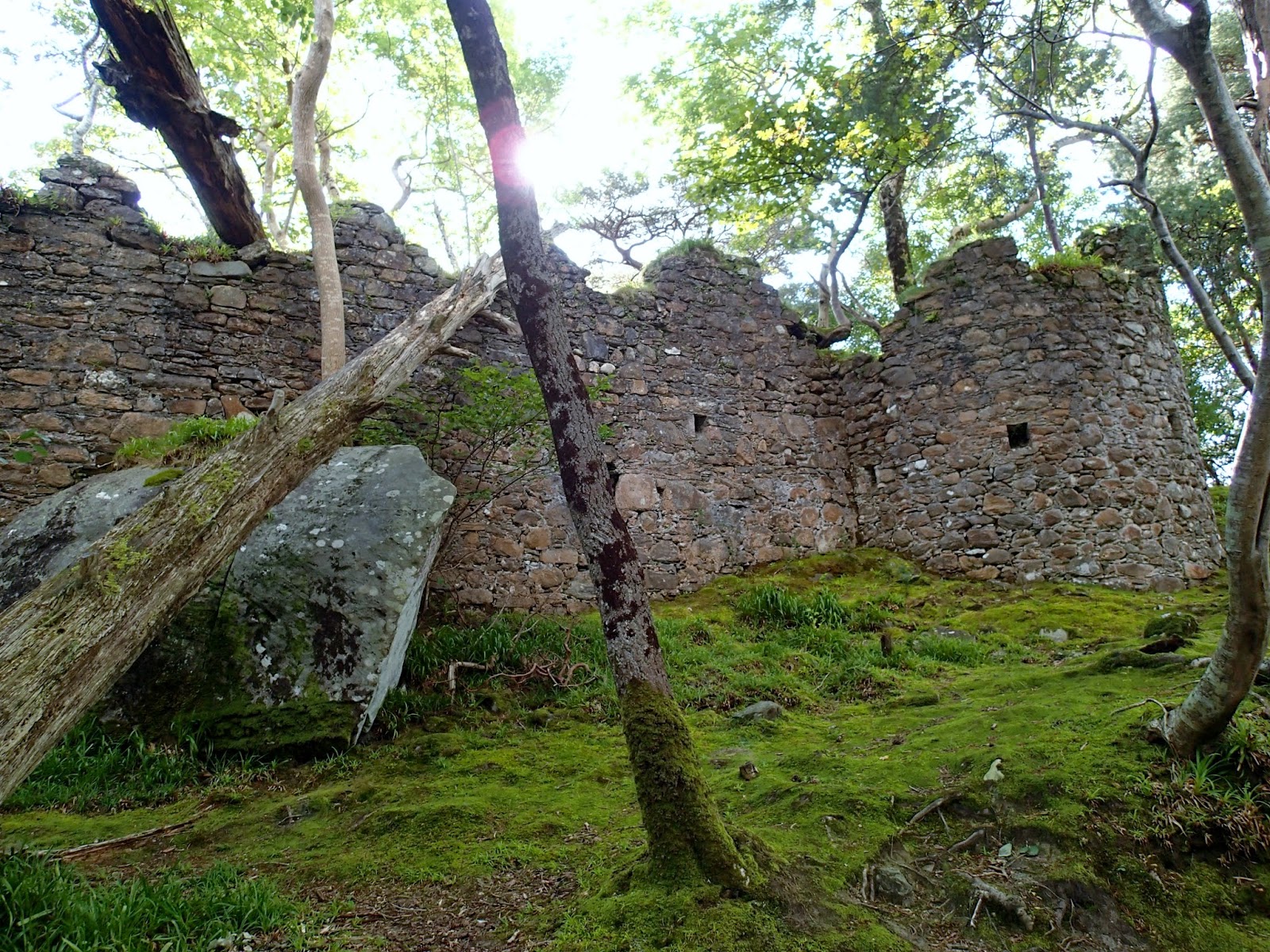 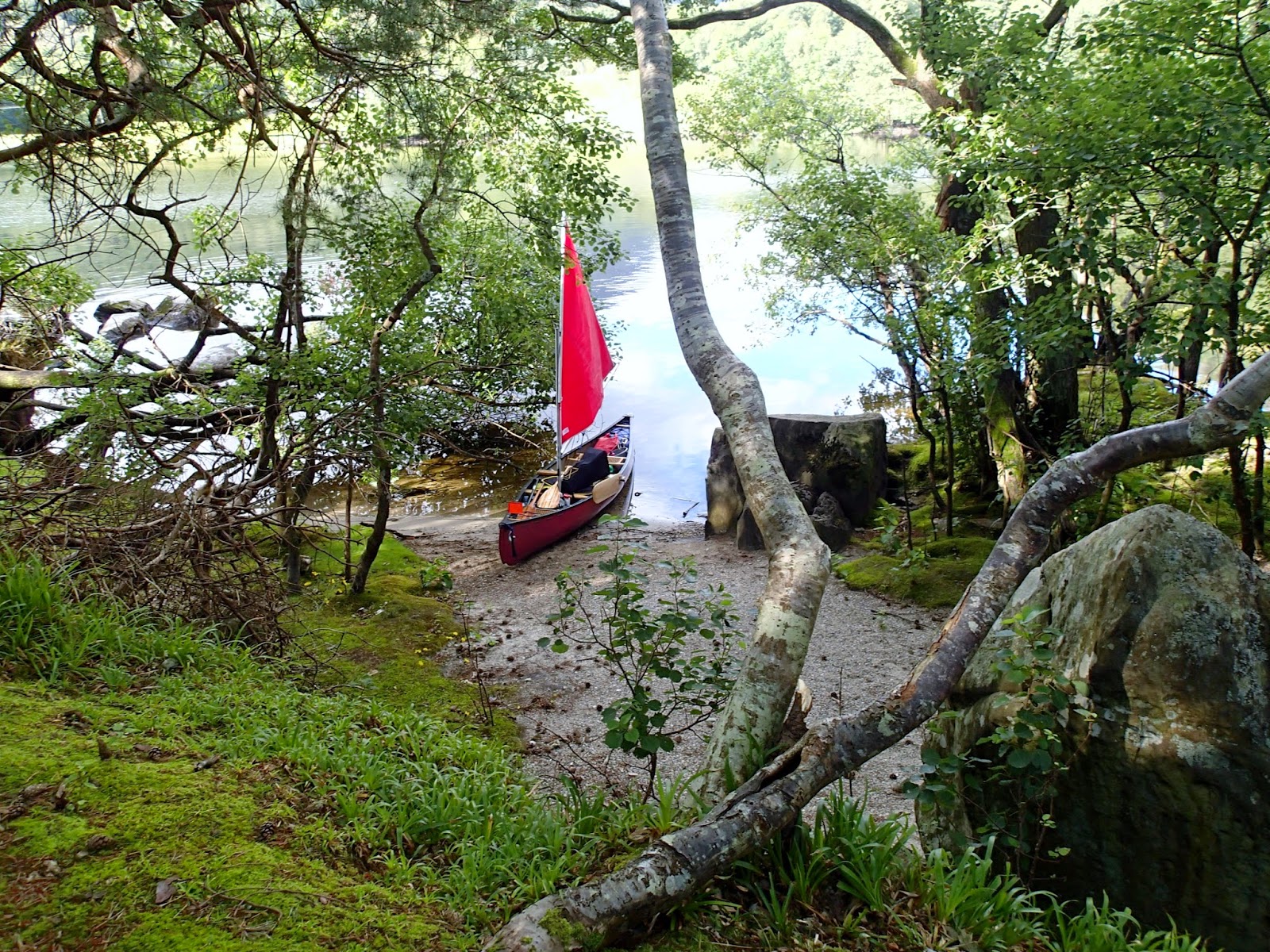 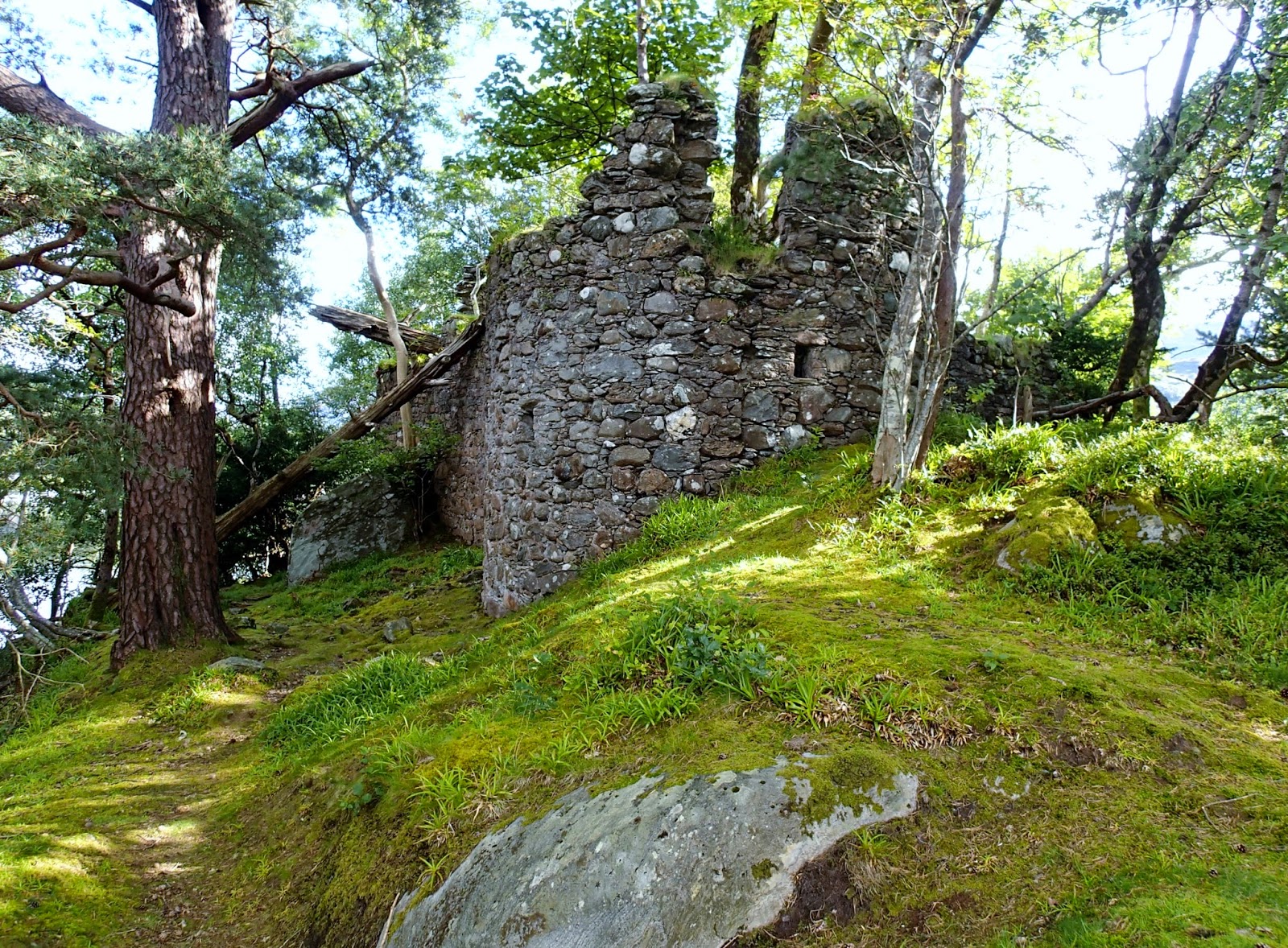 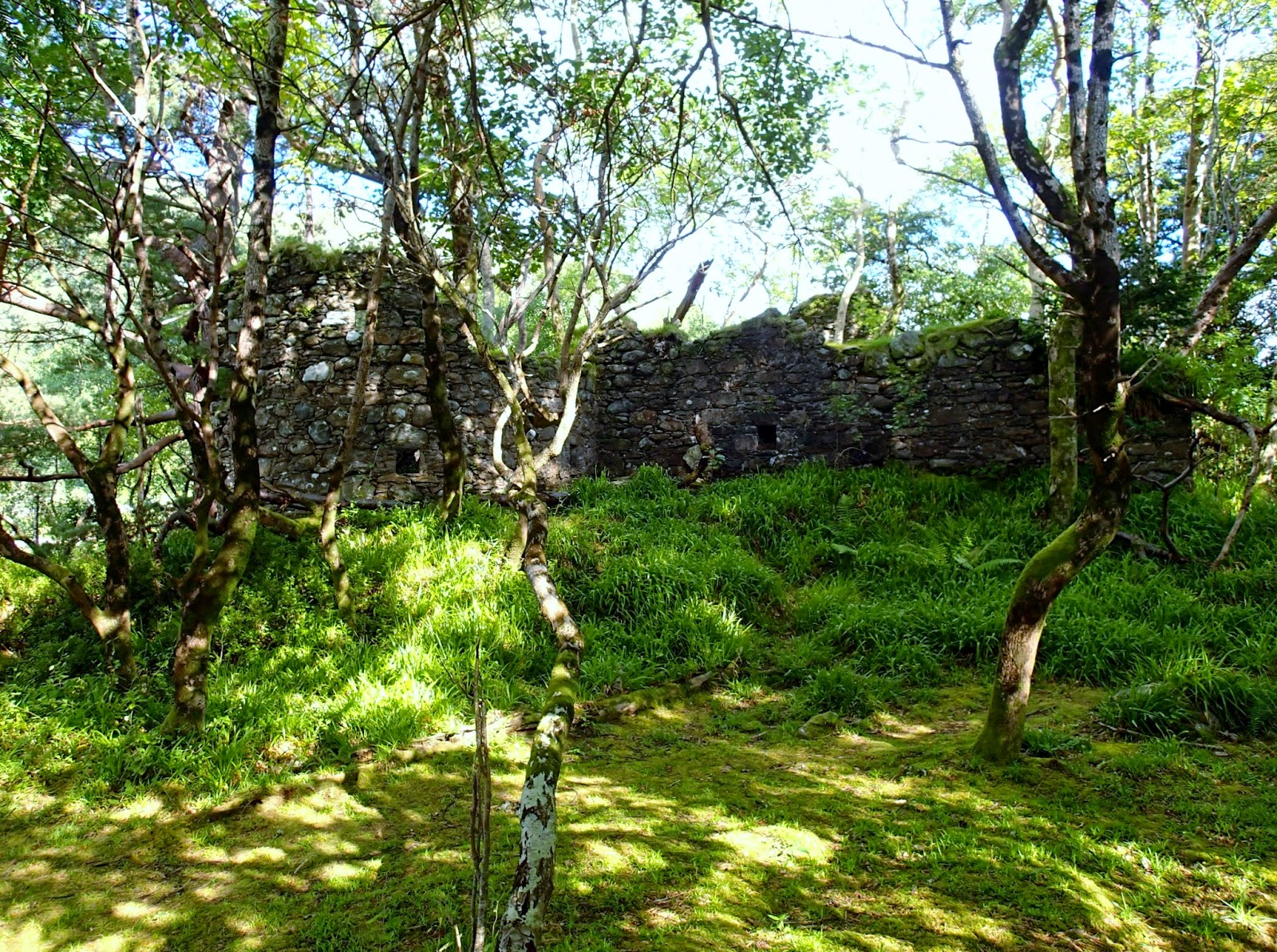 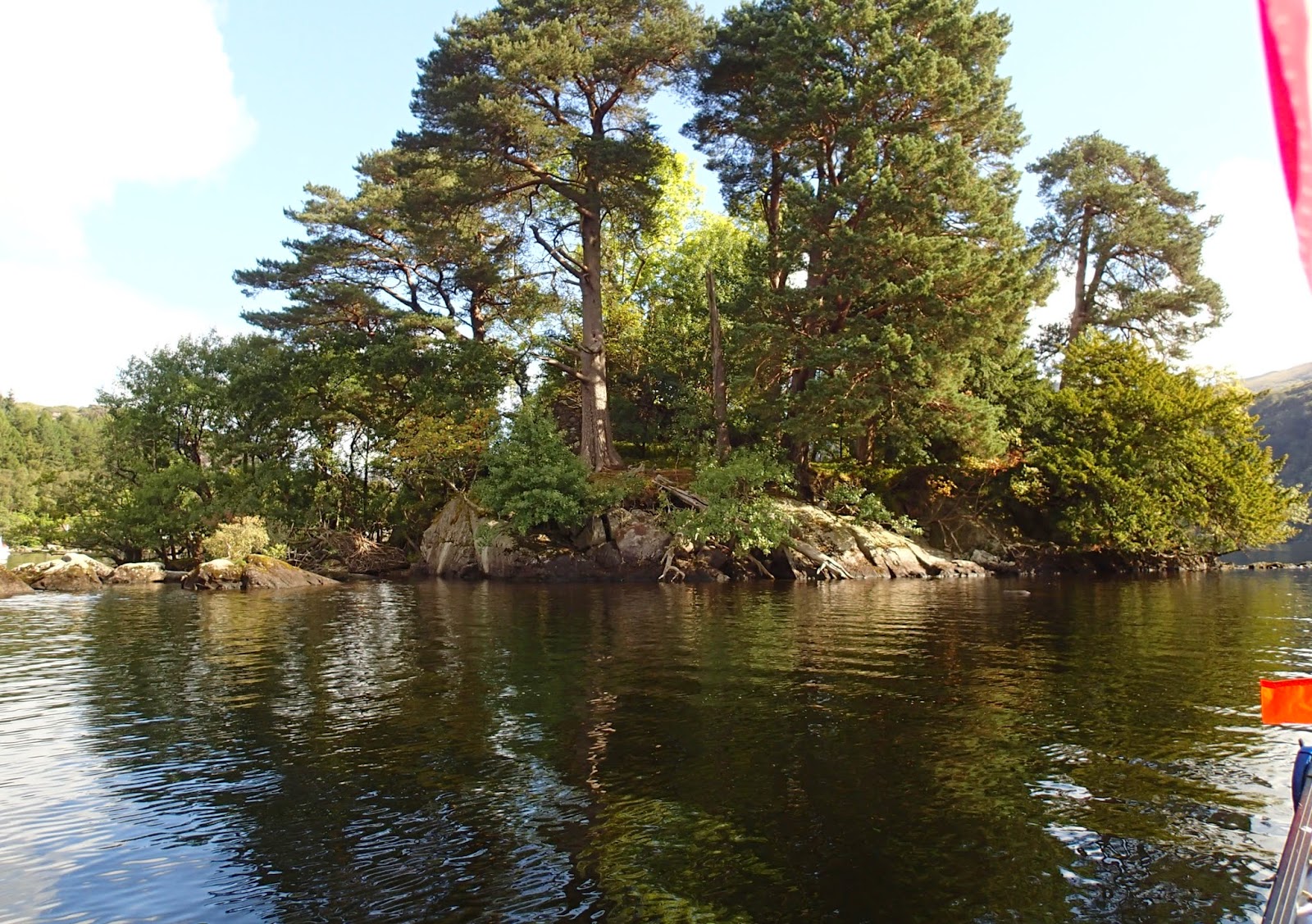 As I left the bay at Inveruglas the first hint of a proper breeze appeared on the water so I sailed over to the beach at Cailness for lunch. 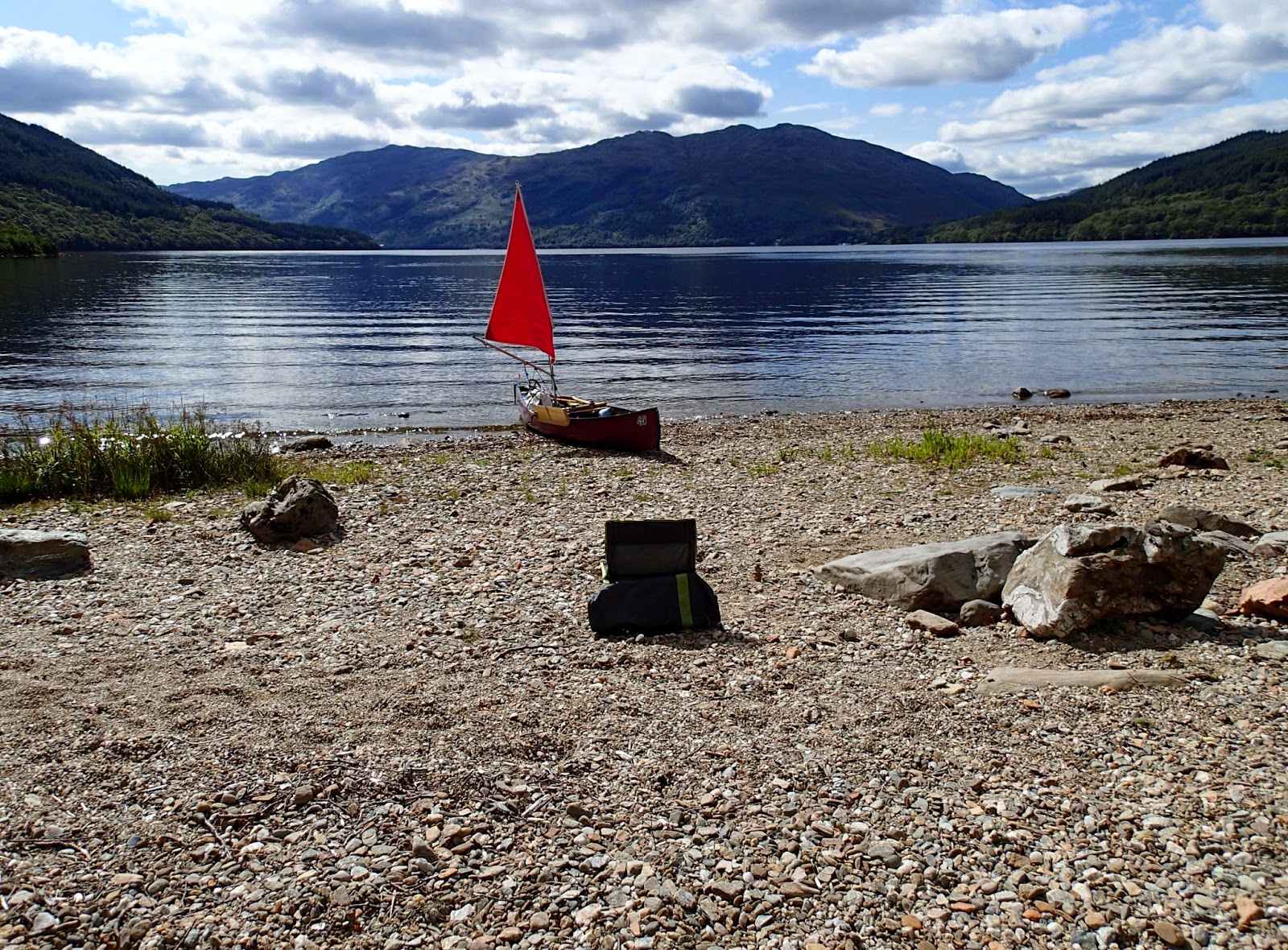 That only left me a short hop back across to the west shore again to my parked car after a leisurely lunch.
The weekend gave me a good chance to try out my new sailing rig (which passed the test with flying colours in very varied conditions) and fulfil a long standing ambition to explore some of the less frequented northern end of Loch Lomond which is well worth a look and is very different in character to the more popular southern end.