I knew that after having surgery at the start of December I'd have to remain inactive for a while to recuperate. For the first few weeks this wasn't really much of a chore as I was still  in a bit of pain and didn't really feel like doing much. After that it was the festive period with the inevitable bustle that entails but by early January I was starting to feel good. I've been warned repeatedly that feeling better wasn't carte blanche to get back to normal, I have to be patient and allow my body to return to full strength and doing too much too soon could be a recipe for disaster.
Last week my good friend Shuzz phoned and asked if I'd fancy joining him on a trip to the Isle of Barra as he had work to do there. It sounded like a great opportunity to escape from the house for a while and Val encouraged me to go as well.
I've harboured a desire to visit Barra for a while and one of my future aspirations is to tour the Outer Hebrides (whether by motorbike, cycling, camper van or canoe isn't yet clear). This was an opportunity to have a quick look and see what the southernmost of the main chain of islands has to offer.
We arrived at Oban to catch the ferry in good time and decided to get fish and chips for lunch in the hope that they'd be better than the fare onboard. This turned out to be a good decision and the fish and chips were delicious. Next it was the short drive to the docks to queue for the ferry. We've both been here before (to catch the ferry to Tiree) but it's always been in summer when the ferry terminal has been crowded with tourists, surfers and windsurfers heading for the big swells, strong winds and pristine beaches that Tiree has to offer. This time in the depths of winter things were much quieter. The ferry was the Clansman (which was also familiar) and as darkness fell we drove aboard to start the five hour journey to Barra. The first part of the journey is familiar enough to us as it's the same as the route taken to Tiree but the second part would be new and crosses the Sea of the Hebrides which promised to be quite rough in the strong winds forecast. If the journey had been done in daylight and good visibility it would have been interesting to see the west side of Coll and Ardnamurchan point but that wasn't to be on this occasion. There wasn't much to do except snooze but despite the heavy weather the journey passed uneventfully.
At about 8:15 PM we drove off the Clansman into lashing rain and gale force winds on Barra. We quickly located our accommodation, the Castlebay Hotel and booked in then we headed to the bar for a few beers. A week or so before I'd watched a programme on BBC Alba (gaelic TV channel) about a folk band from the island called the Vatersay Boys and lo and behold the bands' accordian player (and local Postie) Michael Campbell was in the bar playing pool and enjoying the craic!
The next morning the wind was still howling (literally) but the rain had abated as Shuzz sorted the kit he needed for the jobs he had to do. I took the opportunity to snap a few piccies of Castlebay and the area. 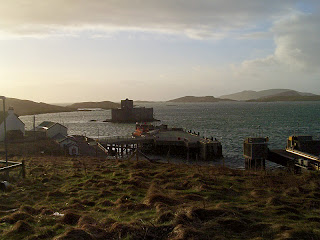 Castlebay pier (where the ferry lands) and Kismul castle. 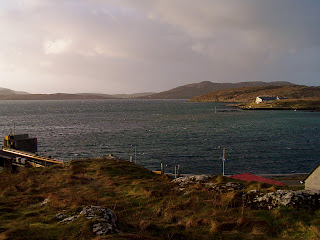 The view across Castlebay towards Vatersay. 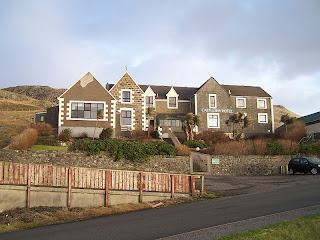 Home sweet home for our visit.
Once Shuzz had sorted his kit we set off for the first site he had to fix. We drove out of Castlebay on the Vatersay road and stopped to take a few pictures and take in the view from the war memorial that overlooks Castlebay. 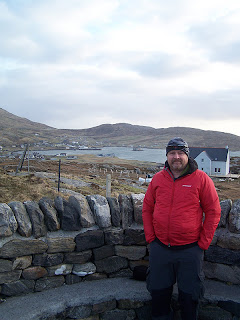 Then it was time to park up and set off to walk up the hill to the site. This was the first time I'd done anything this strenuous since my op so I was a little concerned about how I'd cope. Part way up we stopped to allow a crofter to herd his sheep through a gate. He stopped to talk to us for a while and revealed he was sixty seven years old. He told us how he had been in the merchant navy and had lived in Glasgow for years before moving back to Barra when he retired and said how much he loved island life. After chatting for a while he went on his way and we continued up the hill to the mast. The view was spectacular and I happily took photos and admired the views while Shuzz slaved away. 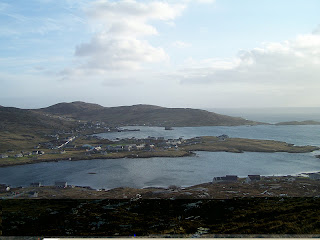 The east and west coasts were both visible from our vantage point and the contrast between the sheltered east and exposed west were obvious. 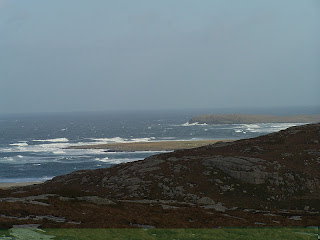 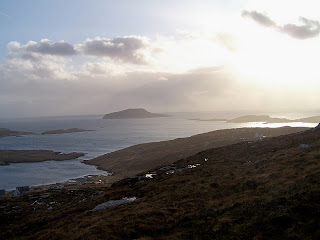 Once Shuzz had finished we set off back down the hill. It was fairly steep and in places slippery. I began to wonder if I'd made a mistake and was relieved to make it back to the van relatively unscathed (although a little sore). Next we headed north and I reluctantly decided I should stay in the van this time while Shuzz hiked out to the next site he had to fix. This actually worked out well as we had no option to but to park in a turning circle and it meant I could move the van if anyone needed to turn. The final site to be visited was perched on a high cliff overlooking the wild Atlantic. Access was via an exposed track which wound it's way above the cliffs. By now it was pitch dark and it was fortunate that this site had vehicular access. By the time Shuzz had finished it was after 5 PM so we headed back to the hotel for the evening.
The next day was again very windy but mostly dry. We had to return to two of the masts so that Shuzz could do some more work there but we had a bit more free time to see the sites of Barra and Vatersay. The ferry only visits the island every third day in winter so we were stuck on the island for another day in any event. We drove up to the very northern tip of Barra , on the way passing the famous airport where planes land on the beach at low tide. We stopped at a narrow isthmus where the coast had been reinforced with flood defences to hold back the winter storms. 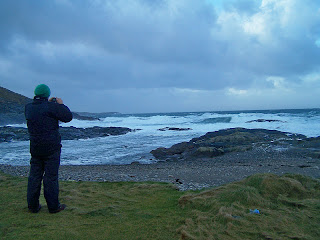 Next we drove south down the western side of the island, stopping to admire the wild seas and beautiful beaches that dotted the coast. 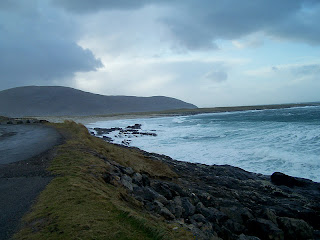 Finally we drove down to Vatersay which is actually a seperate island connected to Barra by a causeway. Here we stopped and walked out to a beach on the west coast where the wind was so strong Shuzz could lean against it! 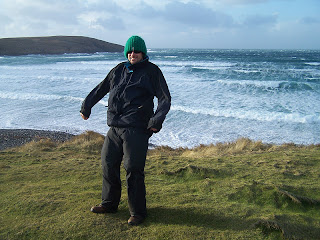 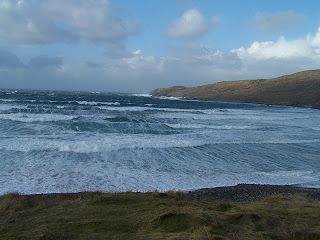 About 200 metres in the other direction was another beach on the east coast which had beautiful white shell sand and turquoise water. 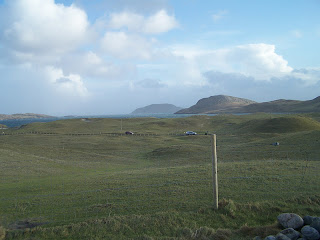 This picture is taken from the dunes above the west beach looking east. 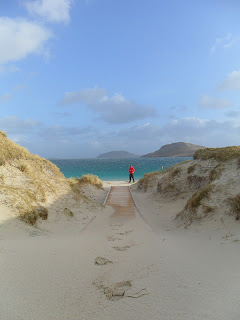 Here's me standing on the sheltered east beach. 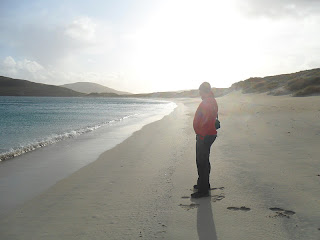 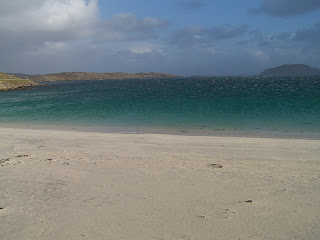 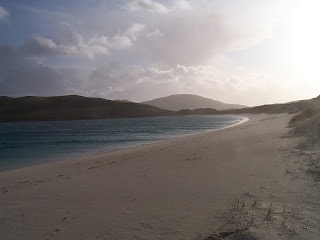 On the road heading back to Barra we spotted a memorial to the crew members of a WW2 Catalina flying boat that had crashed on Vatersay in 1944 while on a training mission from Oban. 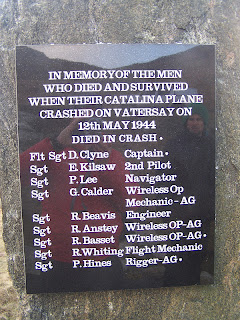 Parts of the plane are still strewn about the area, a very poignant sight. 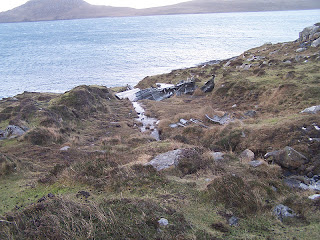 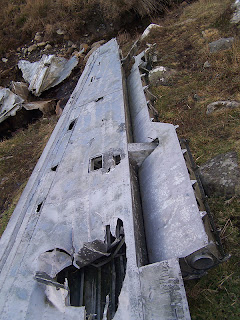 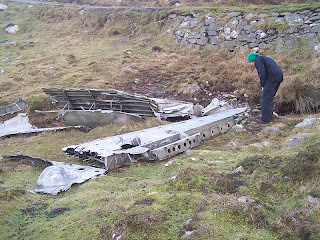 In between sightseeing Shuzz finished all the other jobs he had to do and we made it back to the hotel before dark this time.
The ferry was scheduled to arrive that night from Oban, remain overnight and sail on the return journey in the morning at 8:30 AM. We were booked onto this return trip. Due to the wild conditions though the ferry had been postponed and would arrive at noon the next day and return at 12:30 PM. This meant we could have a lie in the next morning and have a leisurely breakfast at the hotel before boarding at lunchtime. It also freed us up for a few beers that night as well, an opportunity we didn't pass up!
Next morning we were away from the hotel by 10 AM  so we drove round to the west coast for a stroll on the beach before getting the ferry. The waves were still rolling in and the weather wasn't as good with low cloud and drizzle but we saw some otter tracks on the beach. 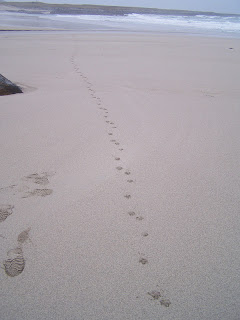 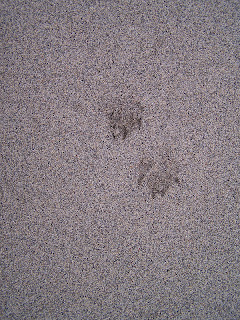 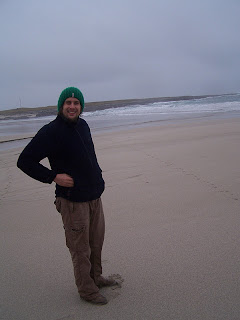 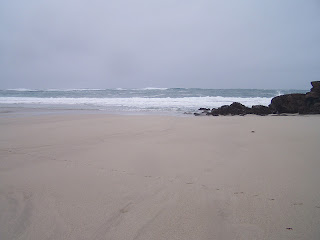 We boarded the ferry on time and set off home once more harbouring hopes of seeing the westward facing side of Coll and Ardnamurchan point in daylight but unfortunately very low cloud and drizzle obscured any views. By early evening we were back on the mainland and driving home.
The trip was a great change from sitting at home and gave myself and Shuzz some ideas for future trips. We made a loose agreement that we'll be cycle touring the whole chain of the Outer Hebrides in the future. I had wondered about the possibilities for exploring by sailing canoe as well but seeing the full force of the Atlantic on the west coast left me with some doubts about this.
Many thanks to Shuzz for letting me tag along on a memorable trip.
Posted by Chris at 12:16 No comments: