Throwing in the Cowal.

Last autumn I did a bike trip from Rannoch Station back to Bridge of Orchy and surprised myself that I was able to ride the route in a day (even though I'd planned to do it over a two). During the winter I've tried to keep the momentum up with my cycling but almost inevitably my fitness has slipped downwards and my weight has slipped upwards.

After a number of false starts, the weekend saw me finally make it back out to do a bikepacking trip. I have a number of routes that I hope to tick off this year but felt that it would be sensible to start off with something that wasn't too ambitious (given the factors mentioned above) so after a last minute food shop I hit the road to drive round to Glenbranter on the Cowal Peninsula. This was to be the starting point for the route that I had in mind and I was pleased to find a large car park with no restrictions or charges where I could leave the car.
I quickly loaded up my luggage onto my bike and set off up the climb out of Glenbranter heading roughly southwest following the Cowal Way long distance path. 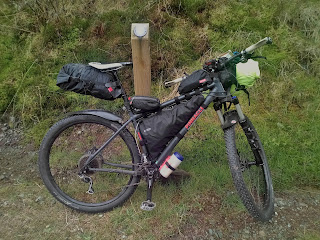 It was steep and relentless climbing on a forest road (not made any easier to handle by being caught and passed by another bikepacker). After a brutal warm up the gradient eventually relented and the views began to open up a bit. The sun was shining making it tricky finding the correct amount of clothing, I was overheating badly on the climb but as soon as I picked up speed on the flatter terrain of Strath nan Lub I started to cool down quickly. 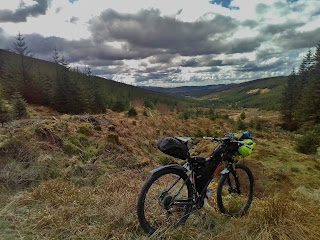 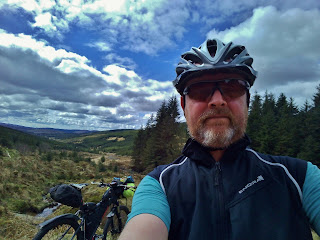 I'd zipped the sleeves off my jacket but they soon went back on again as I whizzed down the  lovely winding track towards the farm at Garvie. 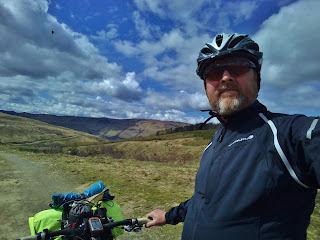 I knew from studying the maps that there wasn't likely to be any technically challenging riding on my route but the lovely weather, beautiful scenery and fast winding track made for very enjoyable riding anyway. At Garvie I turned briefly onto the A886 road before continuing to follow the Cowal Way down the quiet unclassified road towards Glendaruel. 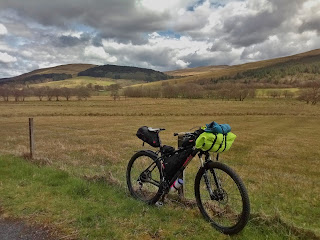 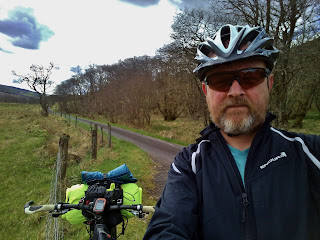 At Glendaruel I stopped briefly to watch a game of Shinty being played before pushing on past the sadly derelict Glendaruel Hotel. It would have been great to call in for a swift pint but as with many such remote establishments the hotel seems to have fallen on hard times. 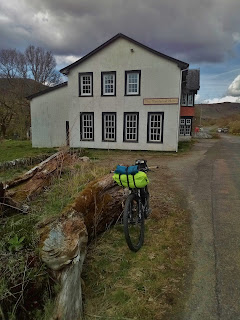 There was nothing for it but to have a swift swig of my energy drink and push on rejoining the main road A886, passing the turn off for Tighnabruaich before turning off myself onto the B836 towards Loch Striven. I was treated to fleeting glimpses of the Kyles of Bute in the distance. 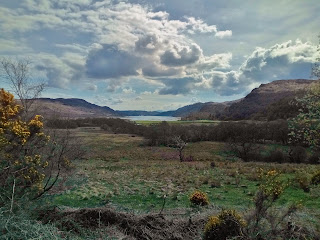 I'd ridden this road a few times  on my motorbikes so knew that I was in for more hard work. I toiled up a steady climb past Stronafian all the while knowing that I was going to lose all my hard gained height when I dropped back down to sea level at the head of Loch Striven. The consolation was that the descent was a hoot (I was able to easily keep up with a van that overtook me at the top) and the views down the loch were superb. 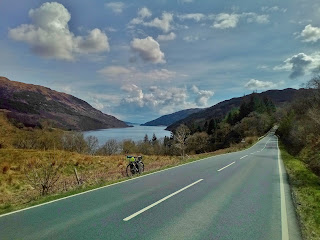 Next it was another steep climb up towards the reservoir at Loch Tarsan. 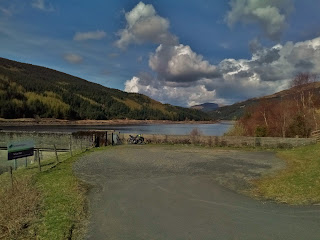 The ride along the side of the loch was very pleasant until I passed Glenlean farm and turned uphill once more onto a forest road which climbed and contoured round above the eastern shore of Loch Tarsan. I decided to start looking for a spot to spend the night (it wasn't late but my legs were tired from all the climbing and I was past the halfway point of my circuit). One advantage of having plenty of time was that I could be choosy where I decided to stop. I passed a perfectly flat grassy layby with a water source which was surrounded by trees but decided to push on a little further in the hope of finding a campsite with a view. My luck was in as a little further on I found another layby with a stunning view and a picnic table! The ground was covered in gravel which gave me some concerns about puncturing my sleeping mat but I had a thin ground sheet to put underneath it to offer some protection. I decided to pitch my tarp supported by the picnic table to save using my bike and front wheel as "poles" like I usually do. 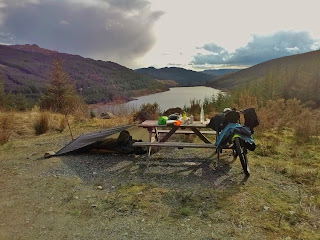 Once I was all set up it was just a matter of enjoying the sunshine while I cooked my dinner. 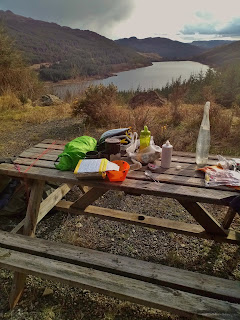 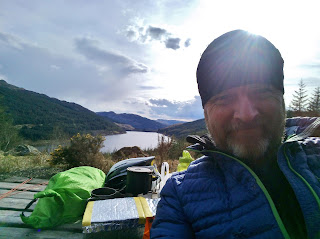 I was finished eating by 7pm so went for a short stroll along my route for the next morning before turning in very early. It was cold overnight with a full moon but I was toasty in my winter sleeping bag and bivi bag.
As I'd gone to bed so early I woke early too, I got up and got started with breakfast but it was very cold and I had to wear all my cycling and camp clothing to keep warm until the sun came up. After breakfast I set off again (heading towards Glen Massan). I was treated to a few final views of Loch Tarsan behind before I plunged down towards Glen Massan. I was amused to note that some other laybys had picnic tables as well. 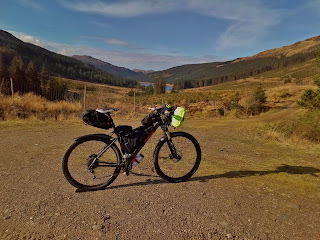 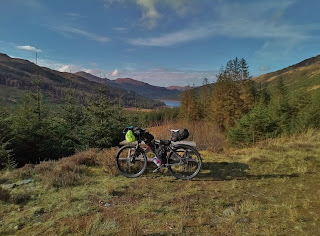 The descent into Glen Massan was really fast and fun and the scenery was lovely. 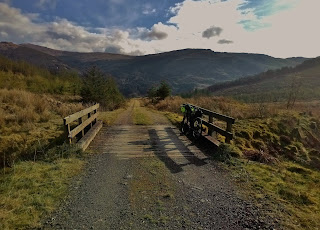 I passed two cows with tiny calves and had to stop and take a picture. 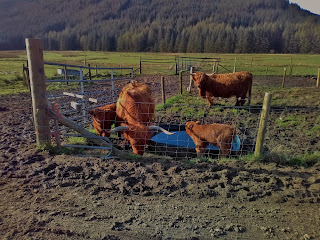 The track down Glen Massan eventually turned into a tarmac road which wound it's way down the pretty glen. 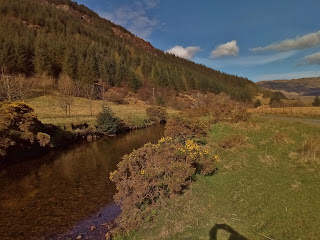 At the bottom of the glen I passed Benmore Botanic Gardens  and Arboretum (which looked well worth a future visit) then there was a stretch alongside the River Eachaig. 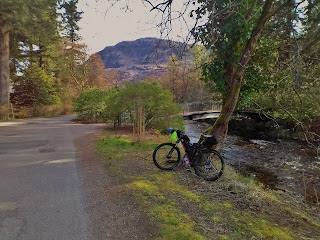 I followed the river up to it's source, Loch Eck and joined the rough track which follows it's western shore. 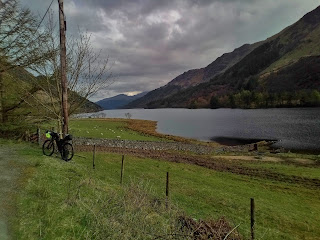 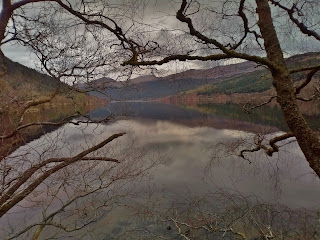 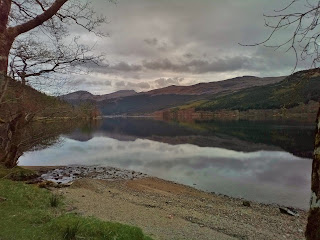 The track meandered and rose and fell along the length of Loch Eck and was very varied and picturesque. Eventually it emerged beyond the loch near my starting point at Glenbranter. 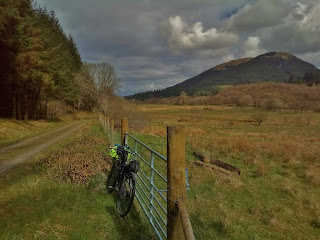 It had been an enjoyable ride and confirmed my suspicions that I don't yet have the strength and endurance in my legs that I had last year, still it's a step in the right direction and hopefully the weather will continue to improve and allow me to do some of the more ambitious trips I have planned.
Posted by Chris at 12:55 2 comments: