I've been sailing with Solway Dory's excellent 35 sq ft Expedition Lugsail for the last year now and have been delighted and surprised by how much sailing performance it has given so when Dave Stubbs from Solway Dory got in touch and asked me if I wanted one of the first of their new Expedition Bermudan Rigs I jumped at the opportunity. The Expedition Bermudan marks a bit of a new direction for the Expedition Rigs as the previous versions have all been Lugsails. The Lugsail configuration allowed the sail to set on a short mast and spars and meant that the rig packed up into a compact bundle for carrying in the canoe if there was no wind and this was central to the Expedition Rig concept. Bermudan rigs offer several advantages over Lugsails though, they sail more efficiently and will point higher while beating upwind. The sail can also be roller reefed around the mast (which is quick and easy to do) and allows you to reef in a lot of small stages and reduce the sail area in small increments down to a tiny size. This is important on any sailing boat but especially so on a narrow canoe equipped with minimal adaptations for sailing. The disadvantage of a Bermudan over a Lugsail is that the Bermudan requires a relatively tall mast which makes storing the rig while paddling more intrusive. Solway Dory have got round this problem by equipping the Expedition Bermudan with a two piece take apart mast that allows the rig to be packed down to a comparable size to the 35 sq ft Lugsail.
Anyway enough of the theory, as soon as I received the new rig I was keen to try it out so on the first decent day I headed for Duck Bay on Loch Lomond. 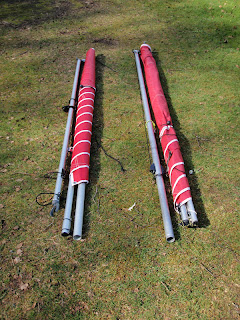 When the two rigs are laid out side by side the lack of difference in size is clear. The Lugsail is on the right, the new Bermudan on the left. 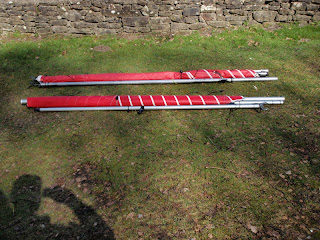 Comparisons out the way I laid out the sail and two sections of the mast ready to slot together. 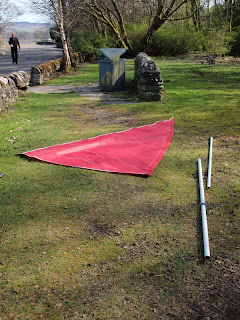 Once the mast is assembled it slides up the luff sleeve on the sail and is tied off at the mast head. 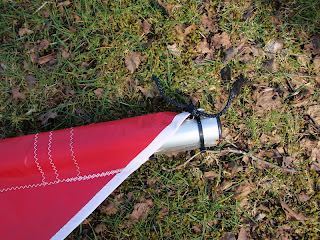 Next the downhaul is cleated off which holds the whole lot together. The sail and mast can then be moved about at will and slides into the mast thwart in the canoe ready to have the boom attached. The whole process is quick and easy taking only slightly longer than the lugsail to set up (with practice I'm sure it'll be just as quick). 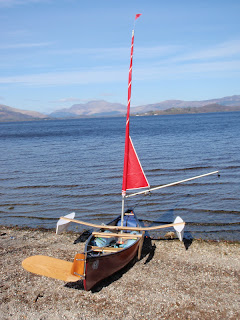 The canoe all set up and ready to sail. 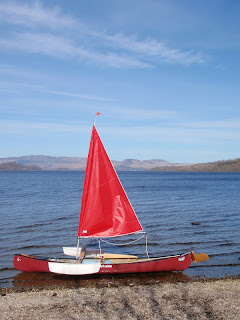 The wind was blowing offshore at Duck Bay so the water was deceptively calm close in but from experience I knew that as soon as I ventured further out it would be choppy. I set off with the full sail out and was immediately struck by how much higher this rig would point upwind than the Lugsail (not that it's bad in this respect either). Being offshore the wind was quite gusty as well and the stronger gusts were pretty strong. I sailed about for a while then decided to land and try reefing the sail (I could have done this on the water but as it was my first attempt thought it'd be safer to do it on the beach). I just took a couple of turns of sail in to try it and see what the difference was. 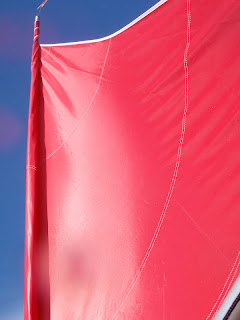 It was really easy to reef, just unhook the kicker, slacken the outhaul and rotate the mast to wind the sail in, reconnect the kicker, adjust the outhaul as necessary and I was ready to go again.
This time I decided to sail a bit further so I set off beating just to the west of Inchmurrin island. 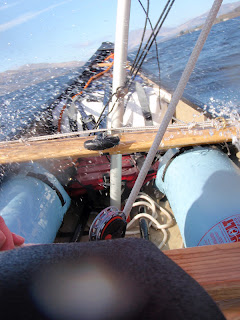 As I'd suspected it was pretty splashy further out and at times it was like sailing while having buckets of water thrown over me! The eagle eyed amongst you may notice in the picture above how much the mastfoot is causing the canoe hull to deflect under pressure from the rig. This also used to happen with my Lugsail and was an issue I was already aware of (and another reason I chose to reef the sail a bit). It's caused by the lightweight construction of my particular canoe and isn't so noticeable on heavier boats. Whilst it's not caused any problems while sailing (other than being inefficient) I've decided to do something about it now and Dave has kindly agreed to make me a braced mast thwart to dissipate the forces more away from the mastfoot and stiffen things up a bit. Hopefully I'll have the new thwart to try at the end of April. 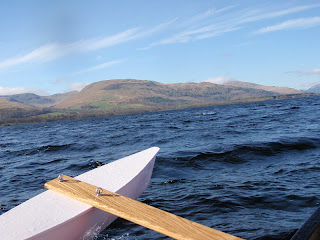 I sailed across past Inchmurrin close hauled then decided to try bearing away across the wind to a beach near the Carrick golf course where I could get out for a stretch of the legs and bail all the water out of the canoe. 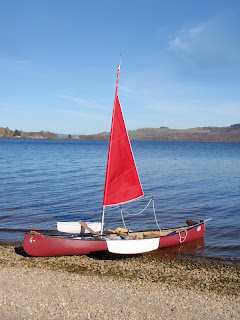 After bailing for a few minutes (there was quite a lot of water in the canoe) I set off back on a beam reach towards Duck Bay. It was fast and fun surfing the swell that I'd been pounding through on the way out. 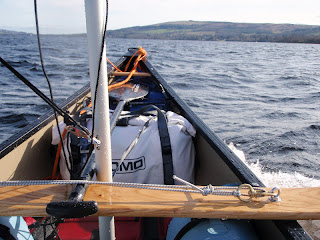 This short video clip gives an idea of what it was like.
Pretty soon I was back at Duck Bay so I unfurled the full sail area again and sailed about nearby for a while before landing to start packing up for the day. 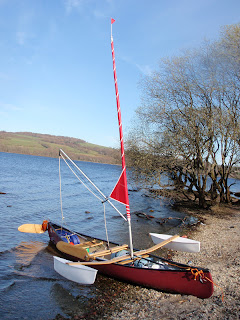 I feel a little unfaithful to my Lugsail saying it but this new rig really does move things on another step in terms of performance. Whilst it's not quite so convenient to pack away totally inside the canoe as the other Expedition Rigs the performance gains combined with the easy reefing make the Bermudan a real winner. I've always thought that the 35 ft Lugsail offered the best of both worlds (allowing you to buy the rig and use it as an expedition rig steering with your paddle initially whilst having sufficient performance to make upgrading to a rudder worthwhile later on if you get the sailing bug) but this rig takes it a step further. You could easily combine the Expedition Bermudan with a 14 sq ft Bermudan mizzen later to give enough power to sail on equal terms in the company of Solway Dory's bigger Bermudan rigs. It's a great way into canoe sailing combining great paddle sailing capabilities with scope for future development if required.
I can't wait to get it out in some more far flung places and explore it's potential further.