I've been quiet recently, a situation that's been due to a few factors. Christmas was spent with family in Yorkshire. I had intended taking my bike and doing some cycling but the forecast was for terrible weather so I didn't bother (in the event there were some lovely days so it was an opportunity missed). I've already mentioned the weather but that has been a big factor in itself, it's been awful! Finally work has got in the way a bit. I'm very lucky in that my job usually doesn't intrude on my free time but there have been a few issues recently leading to me working some extra shifts.
Last week I finally broke my 2014 duck and got out for a short paddle in my canoe on Loch Lomond. The water levels were really high from the recent downpours as I left Aldochlay . 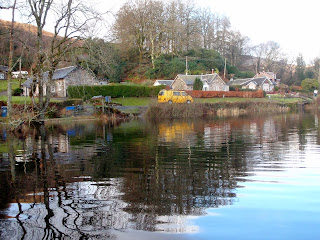 I've recently acquired a new bent shaft paddle (thanks Rambo) to use with my open canoe and this was my first time using it, first impressions were positive as I headed over towards Inchtavannach island. I also had a new kneeling saddle to try out. I've been contemplating changing my paddling position in the Pal for a while and had wondered about fitting a kneeling thwart or an angled kneeling seat as alternatives but in the end a removable saddle seemed like the most versatile option which would still allow me a good seating option for sailing as well (with the saddle removed). Anyway first impressions were once again good, the saddle providing an nice stable, powerful and comfortable paddling position.
As I paddled through the narrows the high water level was once more apparent, the end of the promontory that usually extends from Inchtavannach to form one bank had become an island! 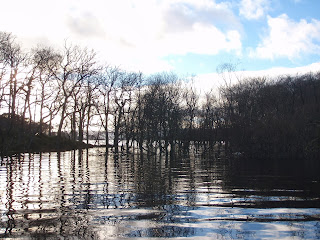 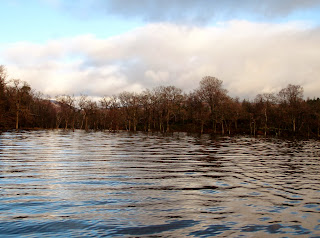 I paddled on around the corner past more flooded ground towards our usual camp spot on Inchconnachan. 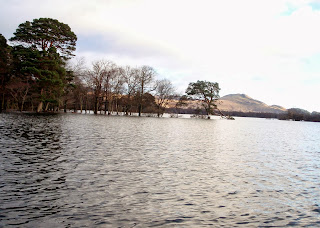 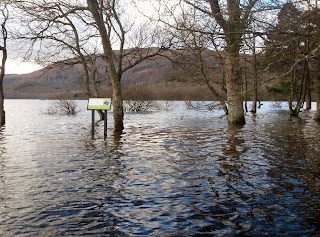 On landing for lunch it became obvious that it was just as well I wasn't planning to camp, most of our camping ground was submerged and there was barely enough dry land to fit a tent! 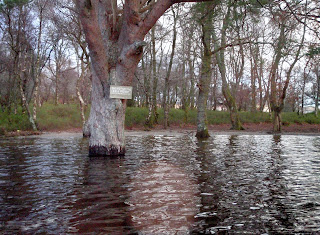 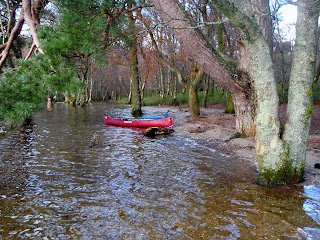 While eating lunch I took a couple of photos of the new bits. First the paddle (a Bending Branches Sun Shadow 14, very pretty!) 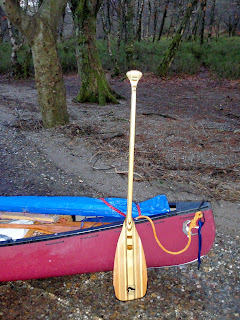 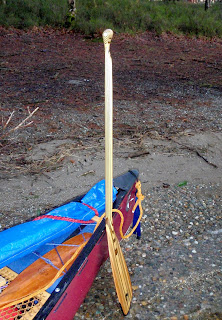 ......and the Aiguille Stingray kneeling saddle. 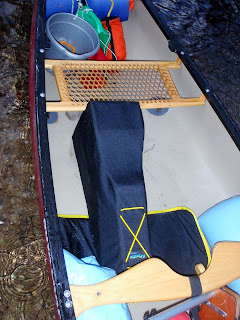 After lunch I decided to try sailing. The wind was light and variable but it's been a while so I was keen to give it a go. I decided to sail round the southern end of Inchmoan in the hope of picking up a steadier breeze. 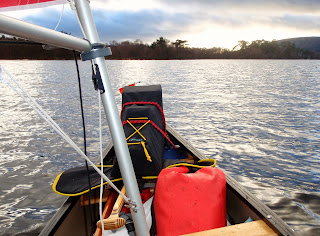 In the event it wasn't much different but I enjoyed a nice gentle reach towards the Geggles. 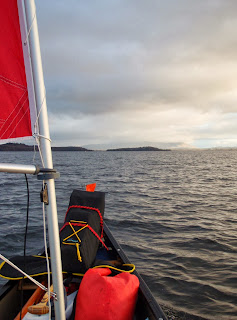 The usually shallow water in the Geggles had turned into a wide channel as I turned north along the edge of Inchcruin and paddle sailed back across past Inchconnachan and Inchtavannach to Aldochlay and my waiting van. It was nice to get out in the canoe and try out the new toys, more soon with any luck.