Loch Sween and the Faery Isles.

Graham and I had been planning to do a trip on the northern part of Loch Lomond however as the time approached it became increasingly obvious that the weather forecast wasn't looking well suited to that particular trip. Although it was to be fine the winds were to be light or non-existent so at the last minute we decided to change venues.
Late on Friday afternoon I met Graham in a lay by just south of Luss on Loch Lomondside and we drove west through Inveraray and down to Lochgilphead. Here we stopped and after a little searching managed to find a chippy that was open. We bought dinner and ate it while sitting on a bench overlooking Loch Gilp. This had the benefit of eliminating the need for us to cook for ourselves (whilst doing little for our cholesterol levels!) Suitably refreshed we set off again driving alongside the Crinan canal for a while before turning off towards Tayvallich. I knew (from a previous trip on my motorbike) that there were a couple of picnic areas on this stretch of road that would provide potential overnight stopping places at this time of year and after looking at them both we settled on one that had a nice level parking area.
We still had some daylight left and nothing else to do so we decided to take a walk down to Loch  Coille-Bharr in search of the elusive beavers (which were re-introduced to Scotland here in 2009). 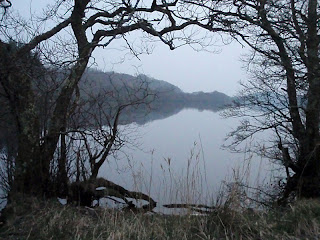 There was little chance of actually seeing any as we were making so much noise chatting away catching up but we saw lots of bats and definite evidence of the presence of beavers. 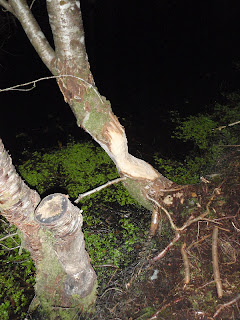 As we wandered on the last of the daylight faded leaving a beautiful still evening. 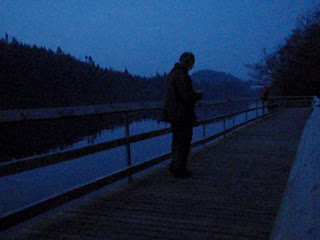 We walked back up the road (preferring this to negotiating the path through the forest in the dark) and were soon back at the car park where we made a final brew before having an early night. 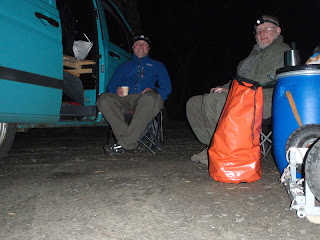 We got up early on Saturday morning and had a quick breakfast before hitting the road for the short drive to Tayvallich. We were at the slipway assembling our canoes by eight in the morning. 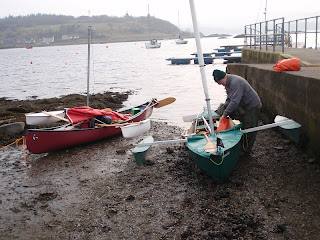 We had to do a short shuttle with the vehicles to leave them in a car park but we were on the water by nine. We tacked out of the beautiful natural  harbour in a really nice Force 4 and enough chop to come over the bow of my heavily laden canoe. Unfortunately as soon as we cleared the harbour the wind dropped and while we were still making decent progress it wasn't the exhilarating sailing we'd just experienced. Still the air was warm and the sun was shining and the scenery was everything I'd been led to believe it would be, the Loch Sween area is really beautiful. Quite soon we sailed into an inlet to check out a potential campsite, it was really pretty and the bottom of the inlet was white sand and clearly visible through the clear water. 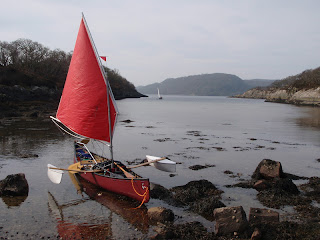 We landed and had a wander about, a lot of the land was boggy but we found one area that looked like a real possibility. After some discussion we opted to carry on a bit further on the basis that we could always return to this spot later on.
We rounded the point at Rubh'an Oib and sailed north into upper Loch Sween, the wind became really flukey, constantly shifting direction and varying between total calm and F4 gusts every few minutes. We ended up paddle sailing into an area I'd been dying to visit since I'd first read about and seen pictures of it in Douglas Wilcox's sea kayaking blogg a few years ago. The Faery Isles are a series of small islands contained in a tidal lagoon branching off the western edge of Loch Sween, ideally you visit at high tide as parts of the upper lagoon dry out as the tide drops. 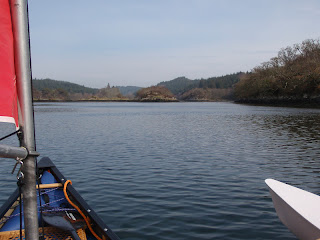 Loch Sween is unusual in that it has a strange double tide so there are effectively two high tides followed by two low tides. Unfortunately our visit corresponded with a low tide and whilst we were able to penetrate well into the lagoon, some of the upper area had dried out. 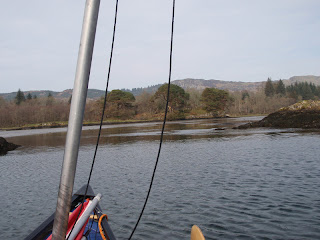 We pottered around for a while exploring in and out of the small islands and admiring the scenery. 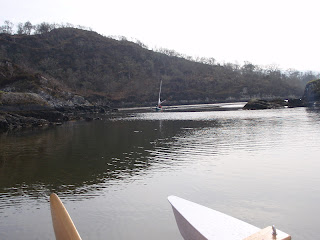 After having a good look about we paddled out of the lagoon and raised our sails again before heading north to see if we could reach the head of Loch Sween. The sailing conditions had us alternating between frustration and fits of laughter as the wind constantly changed direction and we continued to paddle sail which at least allowed us to keep moving in the right direction. As we approached the head of the loch we were treated to a display of low flying by the RAF! 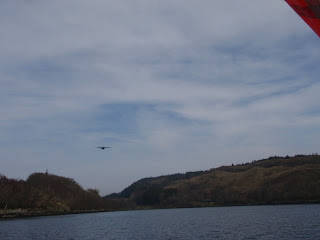 Eventually we reached the head of Loch Sween and landed for the obligatory photo opportunity. 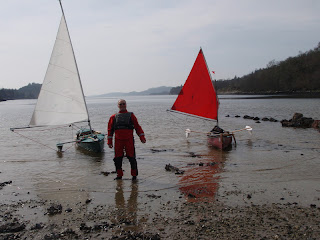 On the way up the loch we spotted a campsite that Stephen had tipped me off about so we decided to check it out on the way back down on the basis that if we didn't like it we could continue on to the spot we'd seen earlier. In the event we opted to set up camp in the spot Stephen had recommended. It was still only lunchtime so after having something to eat we elected to go back out for another sail. While we'd been setting up camp and eating the wind had picked up significantly so we thought the conditions would be much improved. As soon as we set off though it dropped off again and we were treated to similar calm spells interspersed with strong gusts that we'd experienced earlier. Just past the entrance to the Faery Isles Graham whistled to get my attention then pointed, I looked in the direction he indicated and saw this chap sitting on a rock. 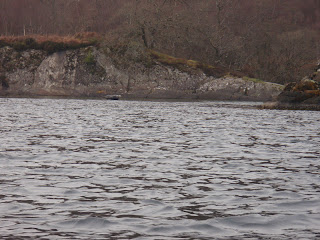 Once we approached the headland at Rubha na Marraidh we could see from the water state ahead that the wind was stronger and we were treated to an exciting reach for about half a mile here as we headed for Cala island. 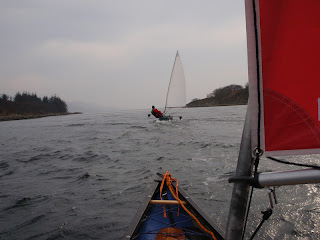 We rounded Cala and headed back passing the entrance to the Faery Isles. 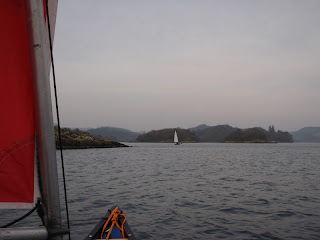 We were fortunate enough to see an osprey flying just after this, I attempted to photograph it but sadly my skills (and my little camera) weren't up to the task of capturing it.
We arrived back at camp and collected some firewood (which was plentiful). Graham did his Ray Mears impersonation and started the fire using his firesteel and some dried grass so we could  cook dinner on it. He'd collected some mussels earlier and cooked them over the fire to have as a starter and they were delicious. 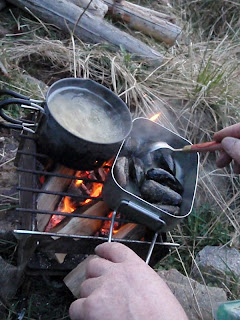 After dinner he even produced a birthday cake for me complete with candles (it was my birthday the following day). Thanks Graham!  We chatted for a while then went to bed mindful of the fact that the clocks would be going forward overnight costing us an hour.
Sunday morning was beautiful. Despite the fact that we were up early again and that it was only March it was really mild. The sun came up over the loch treating us to a lovely sunrise. 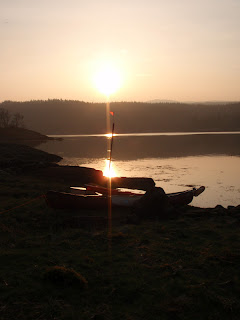 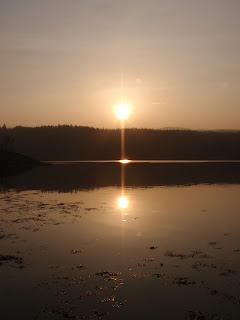 As we cooked breakfast Graham spotted a bird of prey (he thought an eagle of some kind as it was bigger than an osprey) watching us. 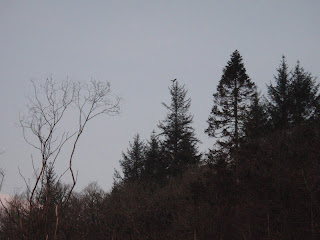 After a while it took to the air and circled for a while before moving off.
We packed up and were on the water just after nine. The wind was very light and we feared that we'd have to paddle all the way back but as we got further up the loch it freshened and gave us a pleasant sail back towards Tayvallich. 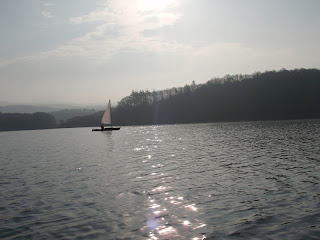 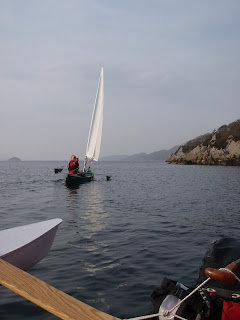 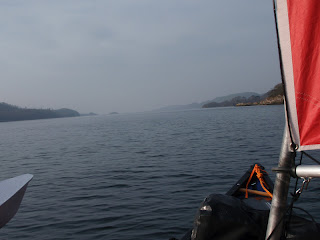 On the way we passed the entrance to Caol Scotnish which looked enticing with a little misty haze hanging over it in the morning sunshine. Exploring this would have to wait for another trip. 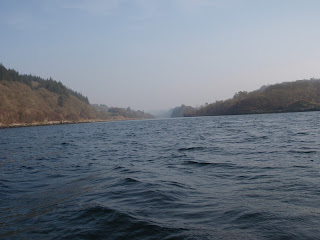 We sailed back into Tayvallich harbour with the plan to drop our camping gear and shuttle the vehicles to the car park near the slipway then we could go back out for another sail unladen. 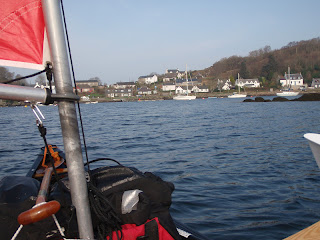 As it happened there was a cafe right next to the slipway overlooking the harbour and it would have been silly not to take the opportunity to have a cuppa and a scone! 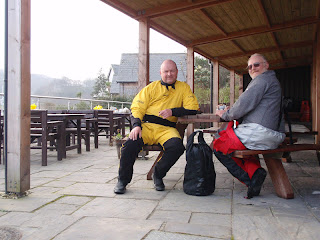 After a quick break we set off again, we'd decided to stay close by in case the wind died  (potentially saving us a long paddle) however we ended up sailing back out round Cala island again. 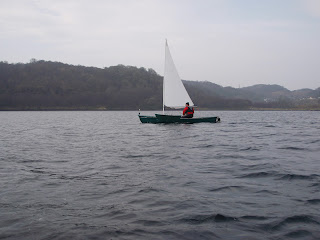 There were some cormorants perched on the island watching us as we drifted past. 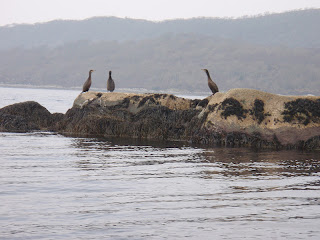 Predictably the wind did in fact drop off again and after a quick look round the corner of Eilean Loain (where we disturbed some sunbathing  seals) we started back sometimes sailing, sometimes paddling and some of the time just enjoying the sunshine! 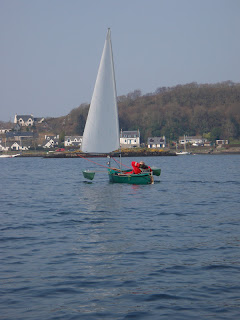 We made it back to Tayvallich just after lunchtime and packed up the boats then we had another cuppa in the cafe before setting off home.
Loch Sween is a beautiful place and there's plenty left to explore on further visits, in fact Graham and I have already hatched a plan for another trip there to see the western seaward end of the loch.