Over the last few months I've been out riding my fat bike on a regular basis in a bid to get a little fitter and inevitably I've acquired various new bits of biking related kit so I thought I'd do a quick review of some of these.
First off we've been doing a lot of night riding (mainly due to the short winter days) and consequently lighting has become a high priority. When I started riding again last year I bought a cheap Chinese LED light off ebay and this has been the mainstay of my set up. The lamp unit itself is quite reasonable and gives off a nice bright beam which is a little bit narrow to be perfect for use on it's own. The battery pack is made up of four lithium ion 18650 batteries in a 2x2 set up (two batteries in series wired parallel to the other two) and came with a basic UK plug charger. There are a few scare stories on the internet about these Chinese battery pack/charger combinations overheating and catching fire so I've been very careful while charging the pack (frequently checking for any heat build up and ensuring that I unplug the charger as soon as the batteries are charged) and charge the batteries in a substantial metal box just in case. So far though I've had no problems and run times have been decent, easily coping with the two to three hour rides we usually do. 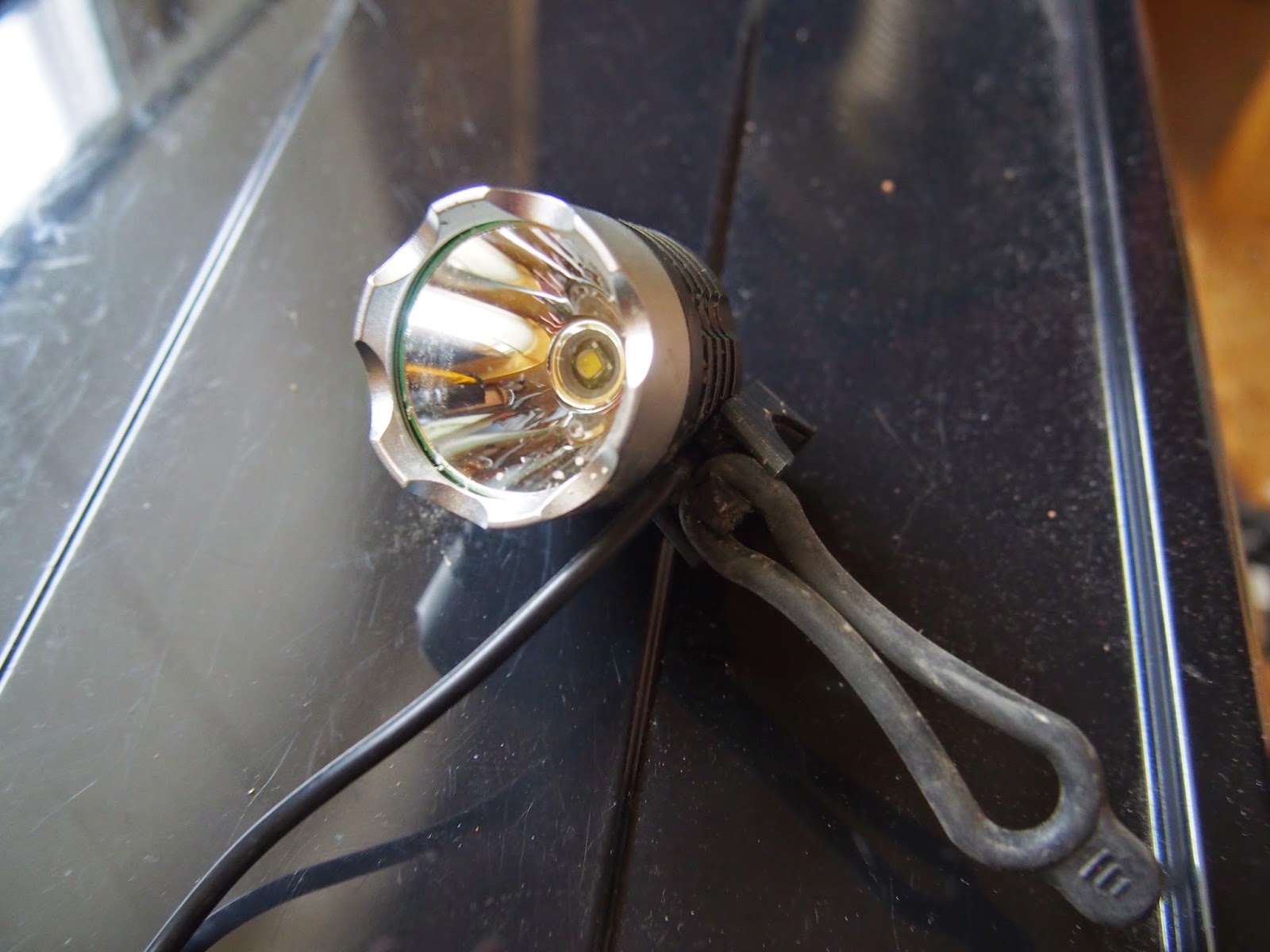 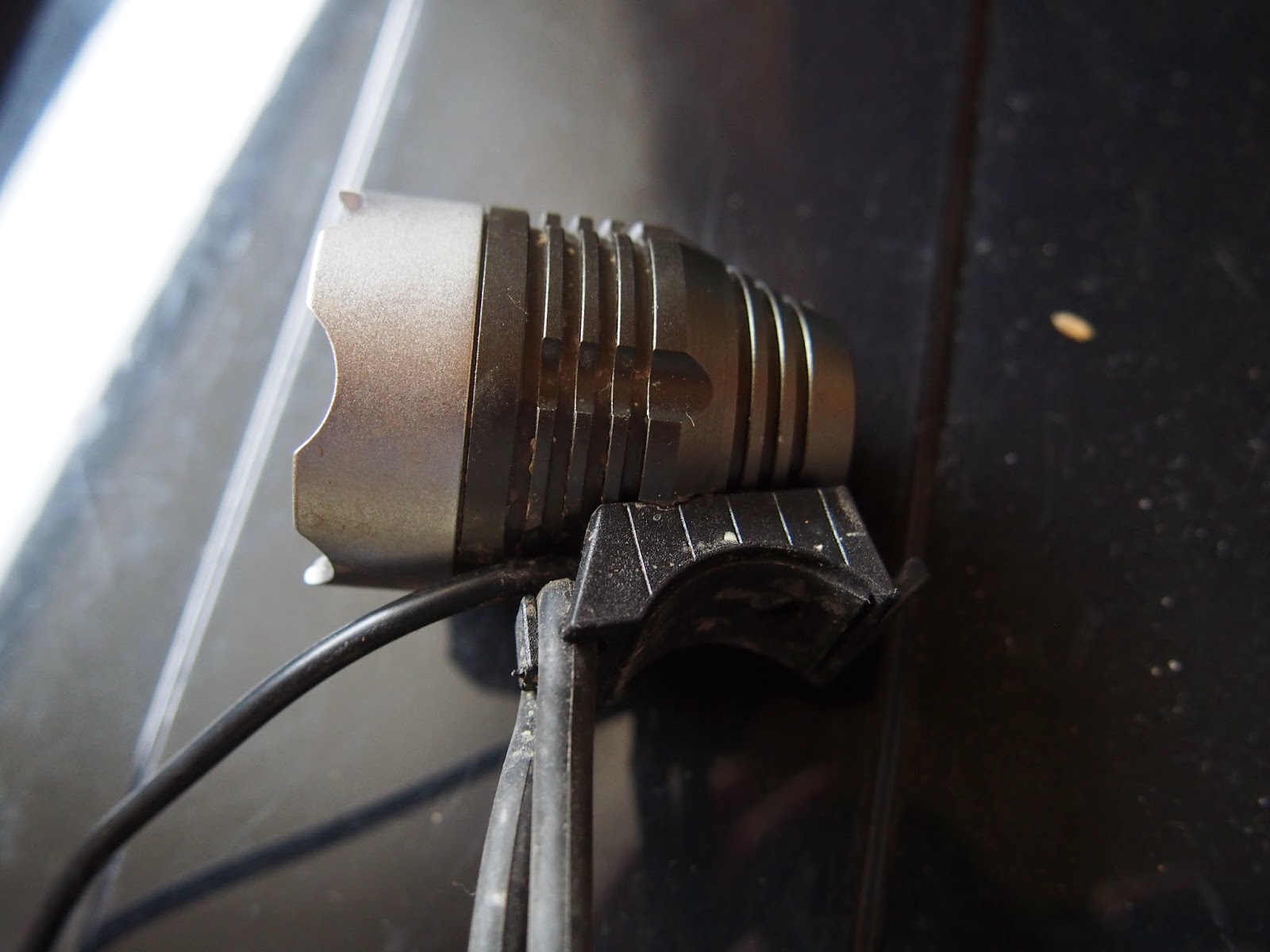 I've supplemented this with another bar mounted light which is also a Chinese cheapy off ebay but of a different pattern. I mentioned above that the first light gave a narrow, spot type beam so I opted for a light with a focus ring to allow me to fine tune my set up with a broader flood beam. The battery pack and charger are identical to the original light. This light doesn't seem to be quite as bright as the original one (possibly because of the different lens as the LED chip is the same) but is still very good and the combination of the two works well in most situations. 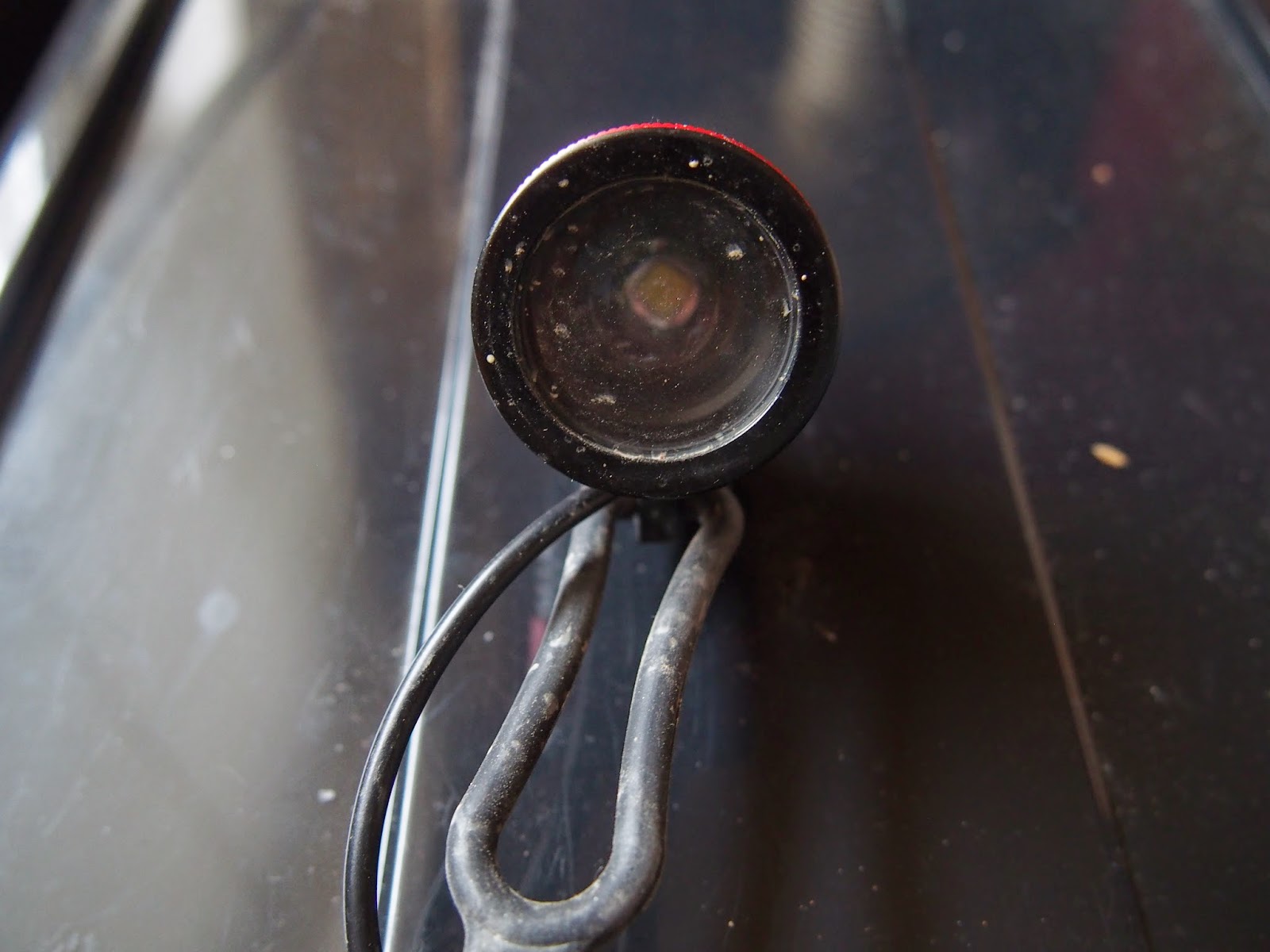 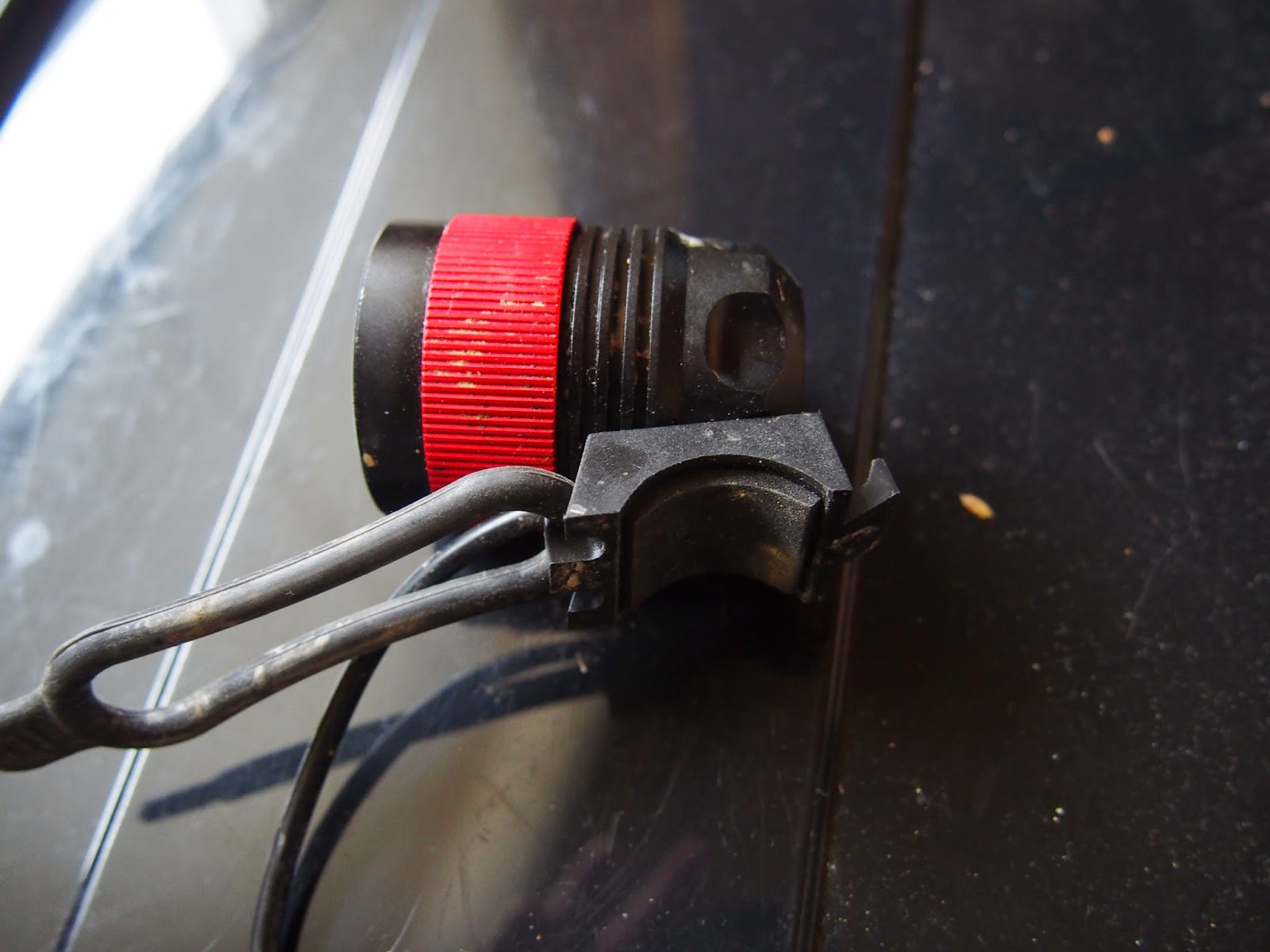 These two lights mounted on the handlebars give enough light for fast off road riding but I'd also been carrying a headtorch in my backpack to use in case of a mechanical problem, puncture etc and this started making me wonder about having a helmet mounted light as well. I reasoned that a helmet light would be good in tight turns where the bar mounted lights tend to not shine right into the corner and light up the exit plus it would give me a head torch for dealing with the aforementioned bike related problems that inevitably occur from time to time. My first thought was to just buy another light like my original one and helmet mount it but while looking about I spotted another option that while being a bit more expensive would be a nice compact light for taking on bike packing trips as well. This more expensive light actually had a brand name (although it's still of Chinese origin and was bought from ebay). It's a Fluxient U2 Mini and has a proper UK importer and a warranty! The light came in a nice box with a bar mount, helmet mount, two decent 18650 batteries and a basic but decent USB charger. Claimed run time is three hours on full power (it also has a low power and strobe option), impressive for such a compact package. First impressions were that it was impressively powerful for it's size and initial testing both on helmet mount and mounted on the bars have been positive. It'll also be an excellent commuter light for use on my roadbike if I ever start riding to work again. I bought the light from a guy in Glasgow who (as well as an ebay shop) has an interesting website on which he compares lots of different lights in a pretty objective way. http://www.torchythebatteryboy.com 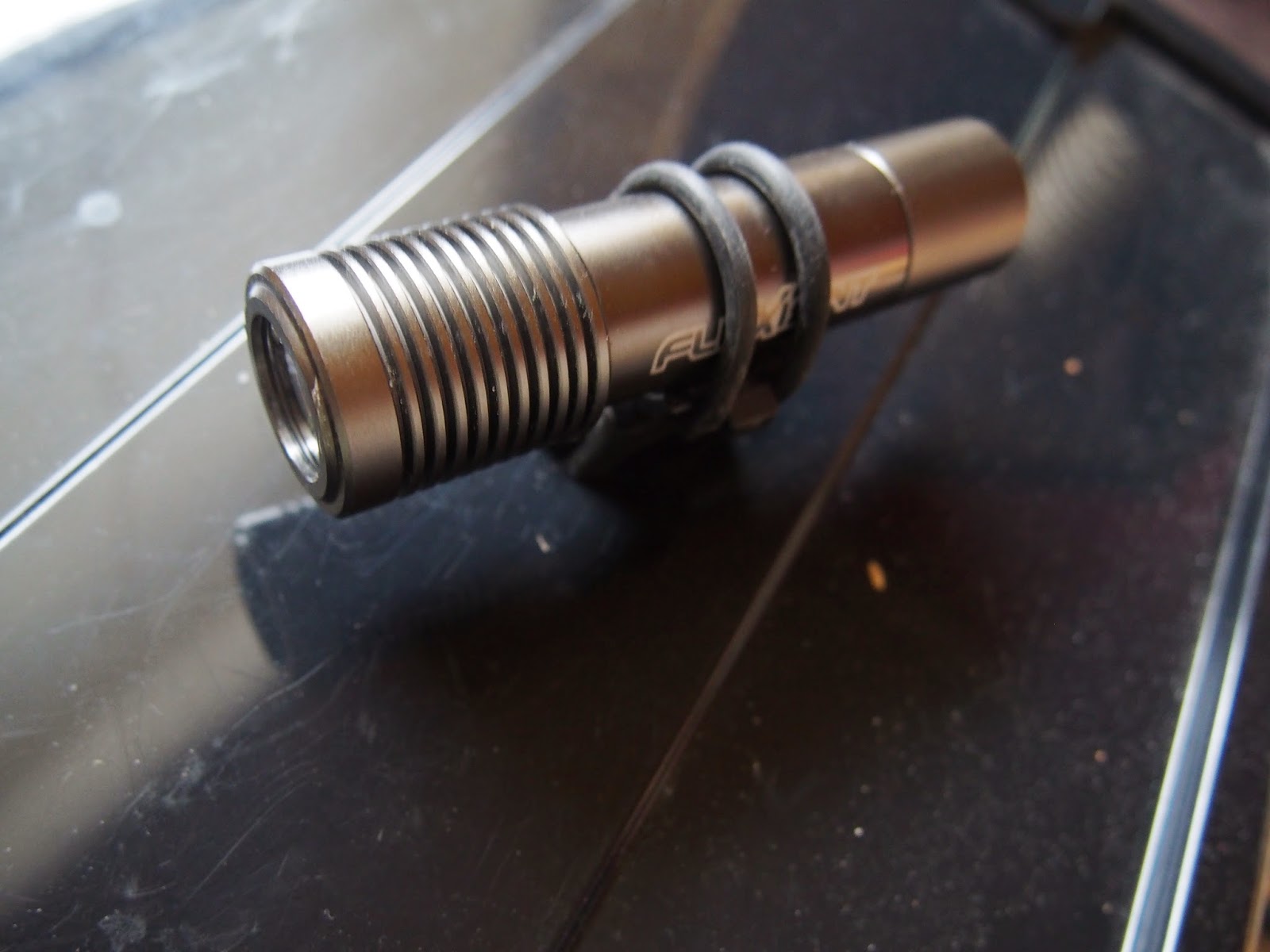 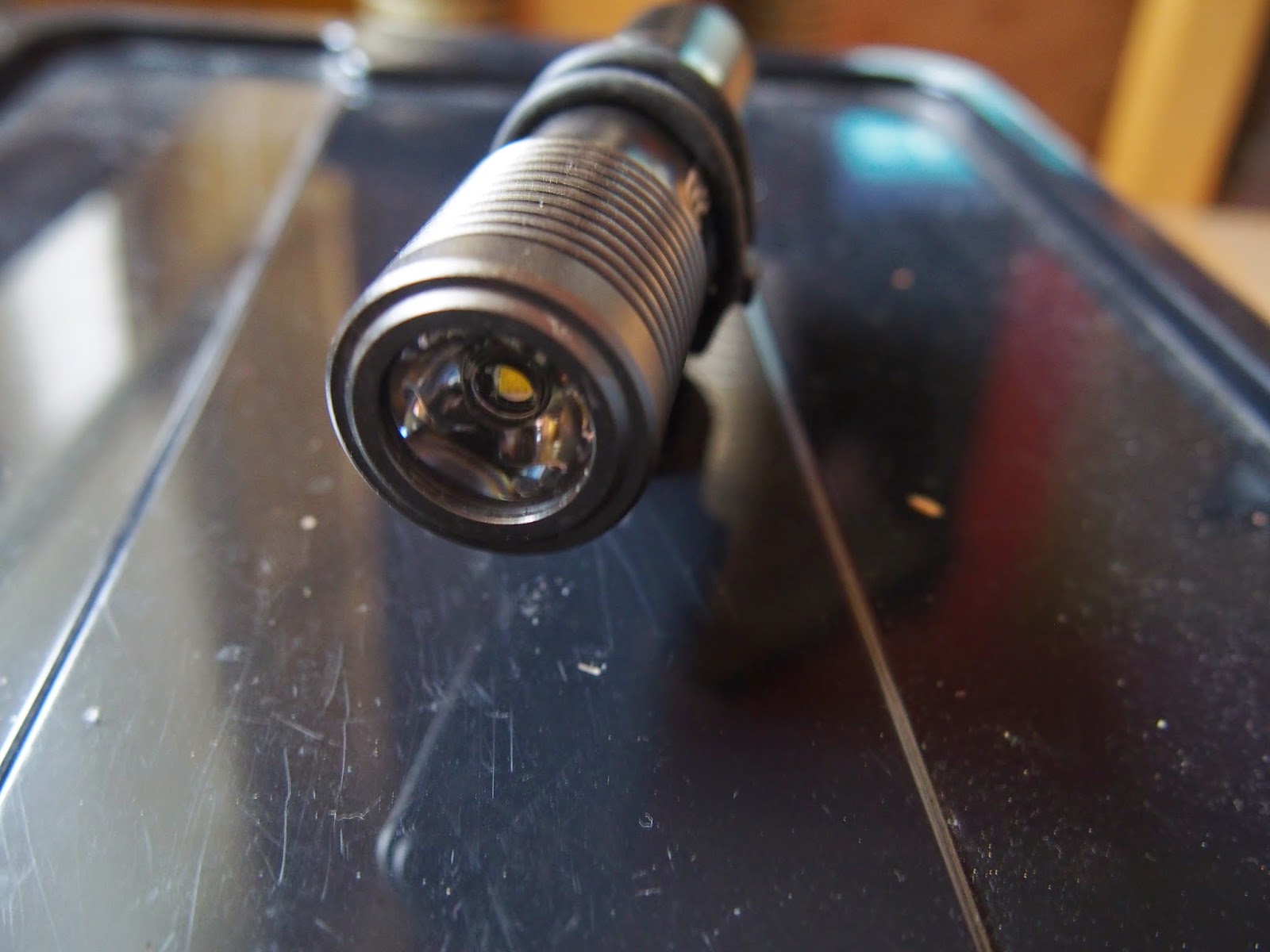 When I initially built up my fat bike I used as many parts from my existing bikes as possible to keep the cost down with the idea that I'd gradually change and upgrade some of the less desirable components as time went on. That process has been ongoing but one thing that I was keen to change right from the outset was the chainset/bottom bracket combination that were poor quality and heavy. I originally used an On One square taper 100mm bottom bracket which was rough running and very heavy and an old RPM/Truvativ chainset that was ugly and heavy. I considered many replacements (early favourites being various options from RaceFace) but in the end decided to opt for  Middleburn RX8 Duo cranks with Shimano middle and inner rings and a Shimano Saint external bottom bracket. This wasn't a cheap option but hopefully it will be a good choice. Shimano bottom brackets are cheap, reasonably light and smooth running and last reasonably well. The Saint model I chose has longer threads on the drive side but is otherwise almost identical to the XT version (apart from being gold anodised, not a consideration at all, honestly!) The Shimano rings are cheap, light and reliable so a no brainer really. The Middleburn cranks were expensive but I felt that they were worth it for being so adaptable for different set ups (the spider is replaceable for running different chainring options, single, dual, triple etc). The fact that they run a 24mm spindle allowed me to use the cheap but good Shimano BB and they have a lovely retro chic look too. The weight saving over my original set up is significant (my Fatty now weighs 27lbs including pedals and mudguards). The difference while riding is also noticeable, not so much the weight saving but the smoother running bottom bracket definitely makes a difference. Another benefit is that the chainline is better and the chainsuck problems that I had with the RPM cranks have disappeared (even when I initially used the chainrings off the RPM chainset). 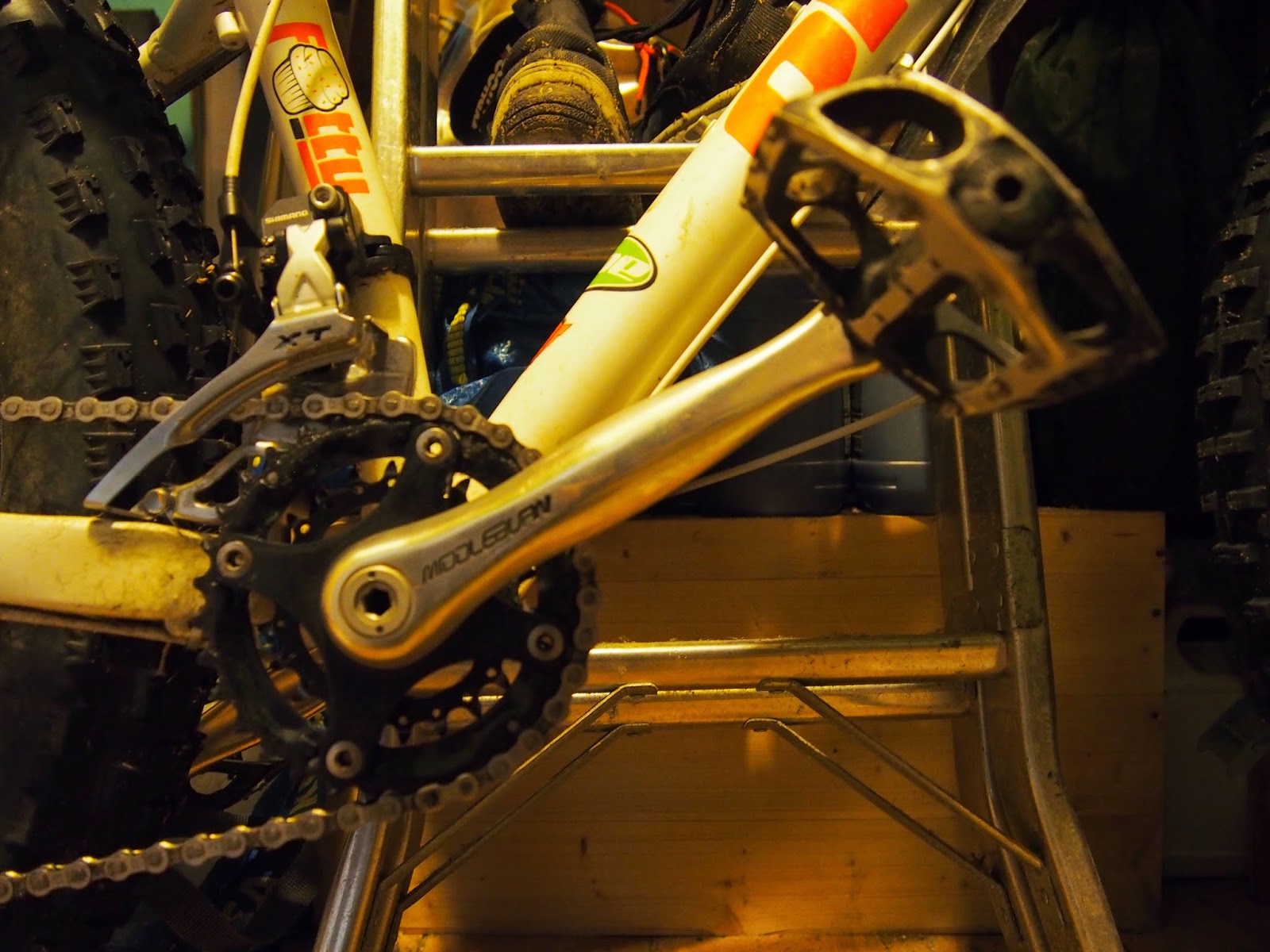 Finally some bits of riding gear; I was looking for some winter riding pants and happened upon some discounted Sombrio Roam pants on Chainreaction's site. These are made from fairly waterproof/beathable fabric, have "critically taped seams" and are also quite nice looking. They'll be too hot for summer riding but that's not what I bought them for. I was so pleased with these that I bought a second pair in a different colour that were even cheaper and I've worn nothing else for riding since.
Back in the day I was an avid user of clipless SPD type pedals but latterly (before my break from mountain biking) I converted to riding with flat pedals and skate shoes. From the outset I intended to stick with this option on my fat bike but I've found skate shoes a bit lacking in grip on hike a bike sections in slippery winter conditions. I played with using my walking boots and trail shoes but these were both Goretex lined and I found water tended to run down my legs into them negating any advantages of having waterproof footwear, On a recent trip to Decathlon I took a punt on a pair of non-membrane mid height trail shoes which were reasonably cheap. I've been wearing these in combination with some Sealskinz waterproof socks and they've exceeded my expectations. They're comfy, supportive, have decent grippy treads for walking and surprisingly grip my DMR V12 pedals really well (at least as well as my skate shoes which surprised me). They also dry quite quickly which is a bonus as my skate shoes were almost perpetually soggy! 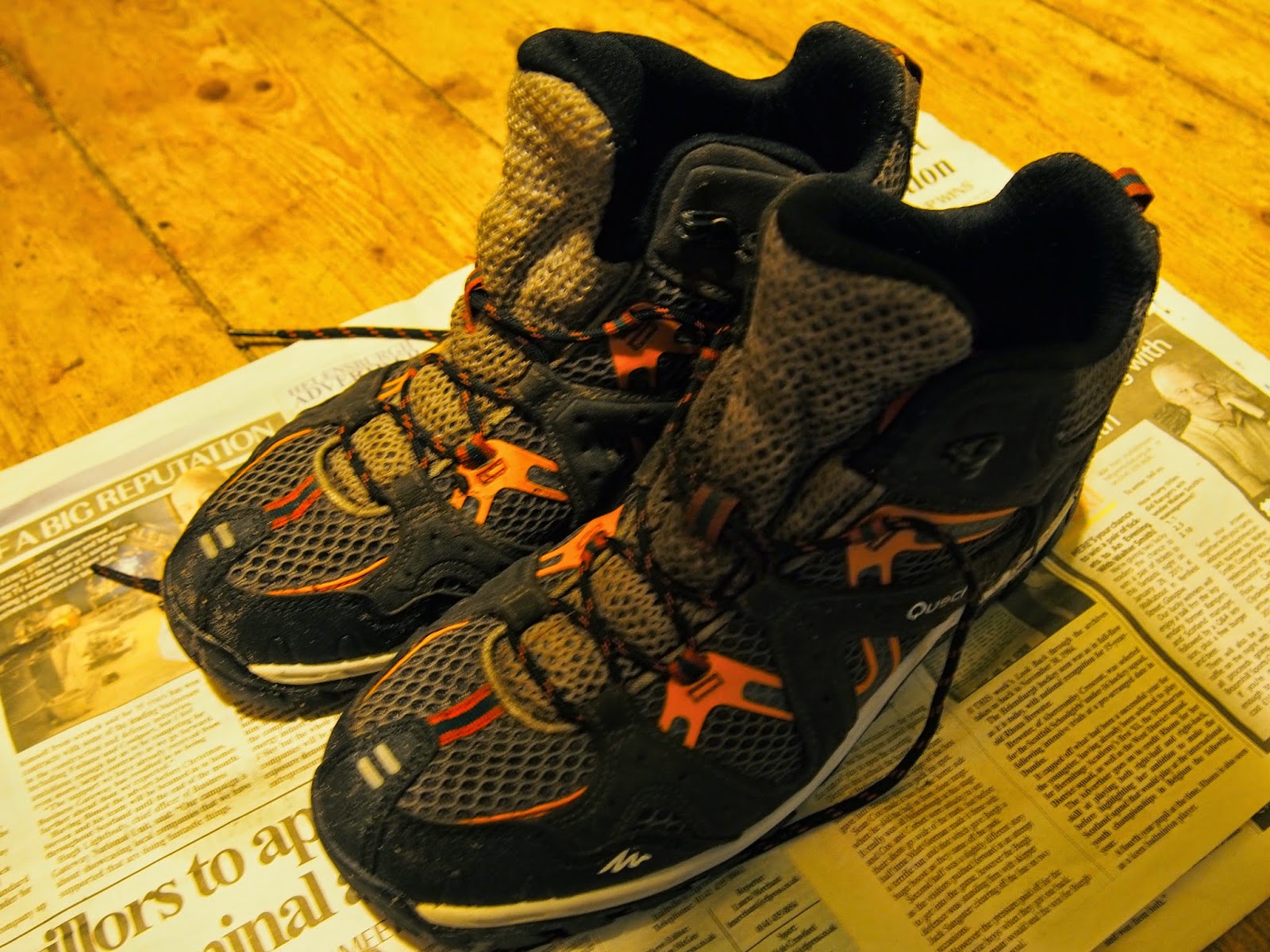 Finally Val gave me a pair of Hot Pogs (http://www.hotpog.co.uk/basic-hotpog-mountain-bike-pogies ) as a Christmas pressie and these have been absolutely fantastic. I always hated riding my mountainbike with thick gloves on and usually put up with freezing hands in winter rather than sacrifice the feel of using my minimalist summer riding gloves. The pogies may look ridiculous but they work superbly keeping my hands toasty even when my gloves are soaked (they don't keep the rain at bay for long) and surprisingly most of the time they don't feel awkward or clumsy (the only time I've found them inconvenient is when I've wanted to adjust my lights or riding glasses while on the move, it's still possible but requires a bit more care). A side benefit is that the reflective strips on them really show up well in car headlights, something I noticed while passing my riding buddy Rambo in the car while he was going in the other direction (he bought a pair as soon as he saw mine).
I'll hopefully do some more kit updates in future and if the weather settles down again and my new tent arrives (which I'll also review) I'll try to actually get out bike packing soon. In the meantime here's a video of Rambo and I night riding in the snow recently (before I bought the Fluxient light)
and a solo ride around the Menteith Hills that I did.