So there I was driving south down the M74 again, the big day had finally arrived. Friday 3rd August 2012 and I was going to collect the new boat!
I quite enjoy the section of the M6 south of Penrith down towards Kendal and this enjoyment was heightened by the anticipation of seeing my new canoe for the first time. As motorways go this section of the M6 is quite spectacular, winding it's way over Shap then it's down the other side and off the motorway and into the lovely south Cumbrian countryside. The satnav guided me through the maze of tiny lanes to Solway Dory's workshop where Dave Stubbs met me at the door and led me inside. The canoe sat in the workshop on trestles and hidden under the superb cover that Solway Dory had made for her. The Daves still had a few bits and pieces to do to finish the boat off and these required the mast to be stepped so we had to carry her outside. As Dave Poskitt rolled back the cover the true beauty of the boat was revealed. Dave S and I carried her out into the foyer and put her on the trolley and wheeled her outside. I was pretty overwhelmed by how stunning the canoe was and words and pictures really don't do justice to the craftsmanship of Dave and Dave. 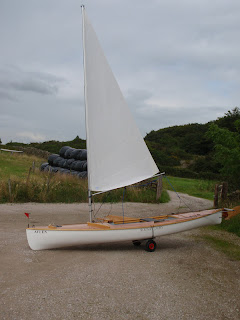 Gavin was having a few days off from his attempt to sail around Britain and was staying with Dave S and his wife Hilary and they both arrived at the workshop in Gavin's camper van. Shortly afterwards Keith arrived on his bike as well so it became a bit of an OCSG reunion! It was interesting to hear a little about Gavin's adventures and chat with him about his trip.
Once the finishing touches on the boat were completed we lifted her onto the roof of my van (a task that was more difficult than I'd anticipated). Soon afterwards I was on my way back to Scotland.
Saturday morning saw me driving up to Rambo's house in Helensburgh to load as much of his kit as possible into the van. He had no car (having left it down south where he's on a course) so once I'd taken his gear he trolleyed his canoe down through the town to Helensburgh pier where I was waiting. We sorted our boats out and packed our camping gear then negotiated the treacherous weed covered slipway into the water next to the pier. 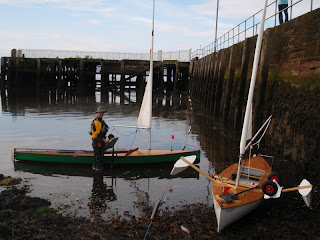 There was virtually no wind as we set off out into the Clyde but it was pleasant anyway in the warm morning sunshine. 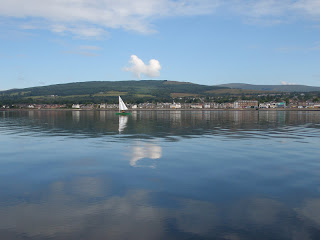 There were brief spells when the slightest breeze got up but we were fighting the effects of the tide as well so progress was very slow. Fortunately there was plenty to see and keep us entertained including a pod of porpoises, seals and the only remaining sea going paddle steamer in the world, the Waverley. 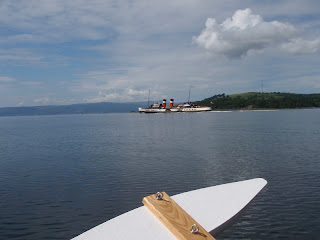 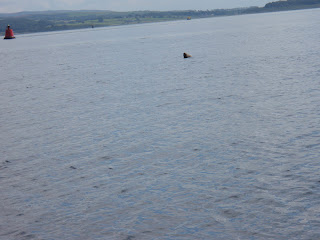 Unfortunately I didn't manage to get any photographs of the porpoises (although I caught them on video) but it was great to see them up close. I've seen porpoises before whilst crossing to Tiree on the ferry but never this close, at one point I could actually see fish that they were chasing jumping out of the water in front of them! The seal in the picture above was a large bull, he was floating on his back with his eyes closed and woke up briefly while I sailed past within a few metres of him, he seemed totally untroubled by my presence and just watched me go past!
Eventually we managed to get past Rosneath point and by sailing closer to the shore we were able to avoid some of the effects of the foul tide. There were large rafts of debris and sea weed floating in the water which occasionally necessitated lifting the leeboard and rudder to clear them. 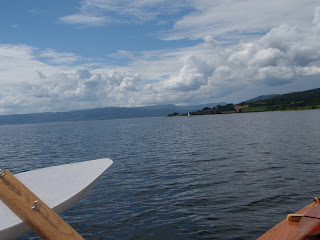 I was starving so eventually we stopped for some food and a drink (I wasn't organised enough to have food accessible in the cockpit of the new canoe yet). We wondered just how far we'd be able to get in such light winds and we briefly toyed with the idea of camping where we were. 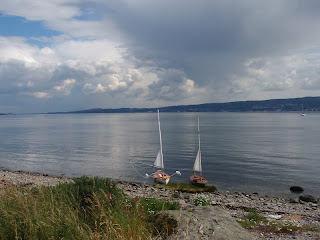 As it was still fairly early and the spot wasn't too promising we elected to push on round into Loch Long and see if we could find a better campsite and cover some more ground. 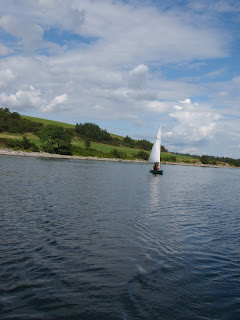 As we approached Kilcreggan the breeze started to fill in a little and we were able to start making decent progress. It was great to feel Aylen start to sail as intended. 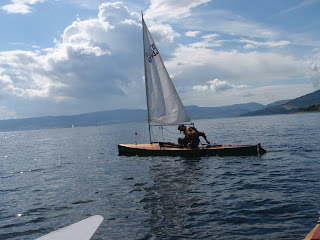 Pretty soon we were whizzing past Kilcreggan pier. 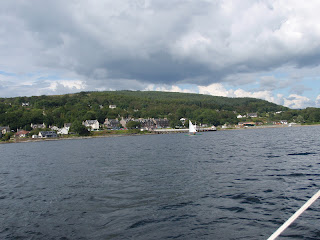 Although it was still bright we could see storm clouds over Gourock and to the south. 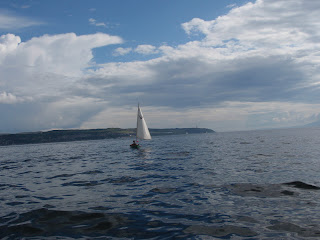 Thunder storms had been forecast for the afternoon and it looked as though the weathermen had got it right. 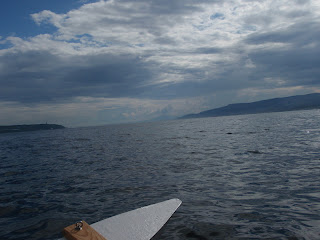 The wind dropped again and we had to resort to paddling north up Loch Long. We passed Cove and it's sailing club and decided to head for Ardpeaton to see if we could find a campsite there. Despite a quick rain shower we escaped the worst of the weather, missing the thunder and lightning and torrential rain that Val later informed me that Helensburgh had experienced. 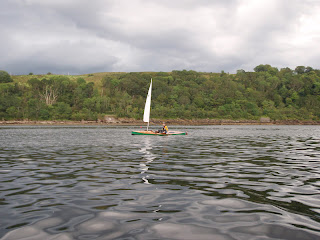 As suddenly as it had disappeared the wind returned as we approached Ardpeaton. We looked for a decent landing spot but the shore was a mass of large rocks so we decided to cross to the western shore and have a look at Ardentinny where I knew there was a nice picnic area that would serve as a good overnight spot. The sail across the loch was quite exciting with the long fetch allowing a bit of a swell to build up. 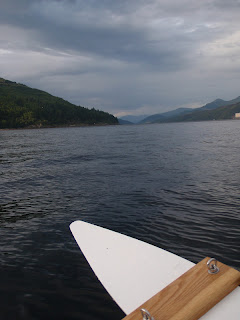 We landed at Ardentinny at low tide which necessitated hauling the canoes a fair way across the sand but we were rewarded with a perfect, flat spot to pitch our tents. 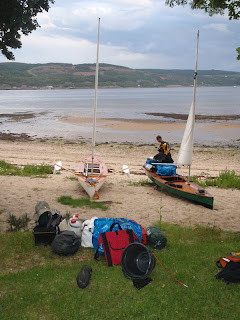 It was getting late by the time we'd put the tents up and the daylight was starting to fade. 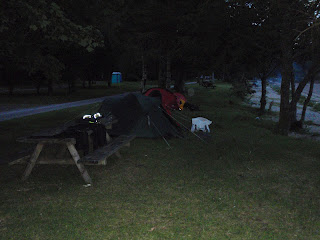 We cooked dinner then hastily hit the sack as an early rise was in prospect the following morning.
Sunday morning saw us up at 6 a.m. Rambo had to fly back down south that evening to resume his course and we knew that with light winds forecast we'd probably have some hard paddling and slow progress ahead of us. We pooled resources for breakfast with me contributing bacon and Rambo making delicious bannock and adding a tin of beans to the feast. Packing up went smoothly and we were soon hauling the canoes back over the sand to the waters edge (we'd timed it poorly almost catching low water again but it was a slightly shorter distance this time as the tide still had a little way to drop). 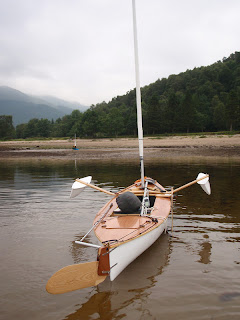 I'd tried to organise my gear in the boat a little better this time by making up a day bag containing spare clothes, a flask, tea bags, my cup and the ingredients to make some lunch on the water. Having the space and a stable enough boat to do this is a bit of a revelation to me after being used to the cramped, precarious accommodation in my other canoe.
As we left Ardentinny there was no wind at all so we had to paddle the boats. I watched our speed on my GPS and we seemed to be able to maintain around 3.5 mph purely by paddling which I felt was respectable. 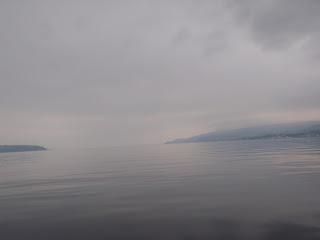 I soon settled into a rhythm and drifted off into a sort of trance similar to what I've experienced while cycling or hillwalking. It's quite a pleasant feeling, just alone with the physical effort and no distractions and hardly a conscious thought in my mind. I aimed directly for Cove on the far side of the loch, choosing to take the shortest possible route while Rambo decided to paddle across the loch then hug the far shore to escape the effect of the tide as it began to run against us. This meant we became separated by quite a distance at times but it wasn't a problem in the flat calm conditions. 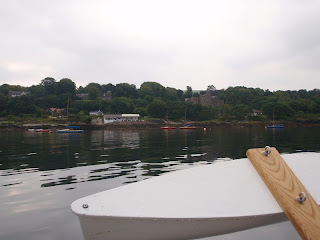 Eventually I passed Cove sailing club ahead of Rambo. Shortly after this I felt the faintest breeze blowing so I had a rest from paddling and sailed slowly. I thought this would give Ramsay the opportunity to catch me up and it also allowed me to lock off the tiller and mainsheet letting Aylen sail herself while I made a cup of tea and ate a cereal bar! 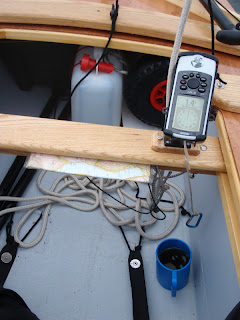 As we approached Kilcreggan and Rambo caught me up the wind freshened a little more allowing us to sail as quickly as we had been paddling previously. 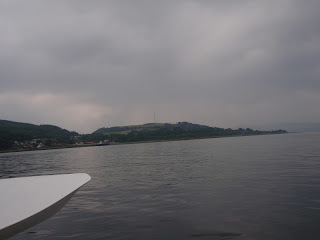 Pretty soon we were rounding the corner back into the Clyde, the wind came and went on this stretch which saw us sailing sometimes and paddling sometimes as the familiar skyline of Greenock came into view. 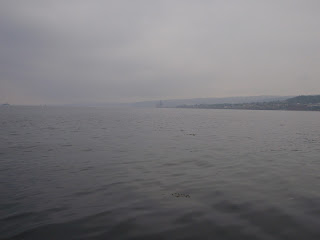 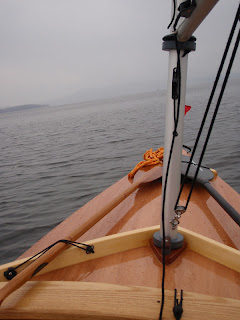 The silence was disturbed by the unmistakable sound of the Waverley setting out on her Sunday cruise. 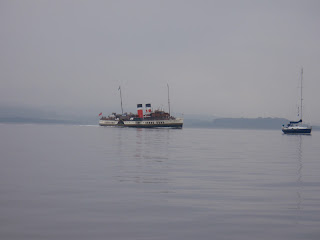 As Helensburgh came into view the wind picked up nicely and gave us a good sail back across to the pier and the throngs of tourists.
I arrived back first and struggled to get Aylen up the greasy slipway on my own. Eventually I succeeded and set about unloading and packing away all the gubbins in the van. When Rambo arrived I broke off to give him a hand then we once more loaded all his gear in the van so that he could trolley his canoe back through town to his house.
The new canoe is hugely impressive both in terms of the quality of workmanship by Solway Dory and also in terms of how much more comfortable, secure and fast it feels compared to my Nova Craft while under sail. This trip really only scratched the surface of it's capabilities and I still need to improve the way I load it (I'm used to throwing everything in a big drybag in the open canoe while packing Aylen is more akin to packing a kayak with everything needing to be in small bags to fit through the hatches). I also need to improve the way I get her on and off the van. Currently I'm unable to manage this without assistance (and this would prevent me doing a solo trip). Unless I can improve on this and devise a method of loading and unloading her on my own usage is going to be seriously restricted. Still I can't wait to get her further afield and try to realise more of her potential.
Below is some of the video I captured on the trip.