The snow hole that never was (part one). A retro blog.

I've always harboured a desire to sleep in a snow hole but despite having slept out in the snow on many occasions it's something I've never actually accomplished.
From my place of work I have a great view of the Arrochar Alps (a range of mountains behind the village of Arrochar) and have often spent spare moments at work admiring the lovely views of snow covered hills like the one below. 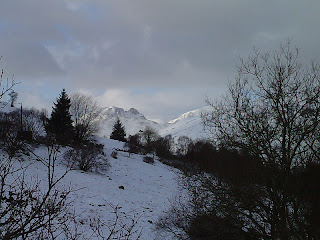 A few years ago there was a heavy snowfall on these hills and I hatched a plan (with my faithful accomplice of the time Shuzzy) to try to finally do an overnight stay in a snowhole. The forecast initially looked very promising but I had a couple of night shifts to do before my next days off and I had my fingers crossed that the temperatures would stay cold enough to preserve the good snow. During my night shifts there was some really heavy rainfall at work but the temperature stayed fairly low so I remained hopeful that the rain would be falling as snow higher up. Unfortunately as it was dark, cloudy and moonless I didn't actually have the opportunity to see what the snow conditions were on the mountains.
The big day arrived and the plan was to leave around lunchtime to allow us time to get high up with some daylight left. That would allow us to search for a nice deep drift to dig our snow hole that would still be safe enough from avalanche or collapse (which can be a danger if you site your snow hole in the wrong place). Unfortunately Shuzz had his departure delayed and it was late afternoon before we parked half way up the "Rest and be Thankful" pass which was to be our starting point. The daylight was already fading fast as we sorted our gear at the side of the road and despite the poor visibility I was having the first pangs of doubt about the amount of snow on the hills. We'd decided to take our snowboards in the hope that we'd be able to board back off the hill the next morning (we've done quite a bit of backcountry snowboarding in Scotland and have the relevant safety gear and knowledge to do this). Combined with overnight bivi gear, food, stoves and spare clothing plus ice axes and crampons our backpacks were huge and very heavy as we set off from the car. 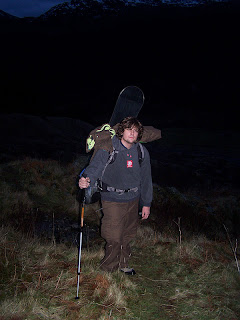 We plodded slowly up the steep hillside past a series of small dams (part of a nearby hydro-electric scheme) taking frequent breathers and wondering when we'd hit the snowline. 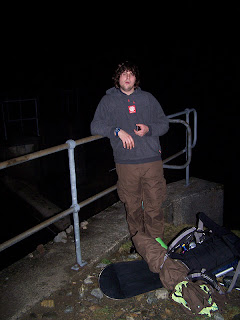 The corrie which we were climbing ends in a steep headwall which I knew would be really hard going with such big packs, the upside was that it would allow us to gain height quickly to the bealach which lies between Bein Ime, Ben Narnain and The Cobbler where I expected we'd hit the snowline. I hoped that once there we would be able to contour around the side of Beinn Ime to an area that I knew held deep snow where we could search for a site to start digging our snow hole.
As we trudged up the headwall in our own little worlds of pain we became seperated, each trying to find a non existent easier line up the steep hillside. All I could see of Shuzz was his headtorch bobbing about in the distance as we worked our way upwards. Eventually the gradient eased off and we emerged onto the relatively flat area on the bealach. We were pleased to be above the steep ground for a while but there was no sign of any significant snowfields. We headed up the lower slopes of Bein Ime in search of a decent spot to build our shelter and eventually found some patches of wet sugary snow in the area that I'd expected to be loaded. It was now clear that the rain that had fallen earlier hadn't been falling as snow even on higher ground and the impressive cover of a few days ago had been stripped by the deluge.
We had a conference to decide what to do and settled on trying to build an igloo like shelter. We knew that if the worst came to the worst we could retreat back down to the car but we were reluctant to give up without a fight. I have only built an igloo once before (when I was a kid growing up in Yorkshire) and the snow wasn't really solid enough to make proper snow bricks but using a folding saw and our snow shovels we set to work learning by trial and error what would work and what wouldn't. It only seemed like a short time until we reached the stage where I had to build myself into the igloo while Shuzz passed the blocks over the walls to me but in fact it was getting very late. Finally Shuzz placed the last block on the top and I was sealed inside. I'd taken the saw in with me and cut a doorway to the outside world then we had a celebratory brew while moving our gear into the igloo. 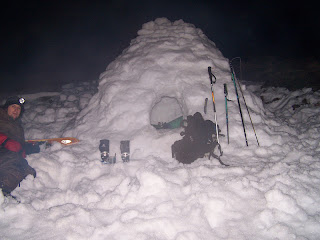 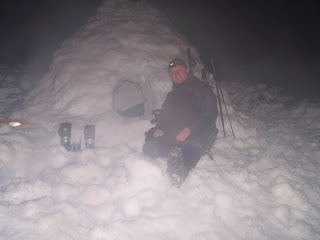 When we checked the time we were both amazed to find it was one in the morning, it had taken ages to build the igloo! We wasted no time in moving into our tiny haven 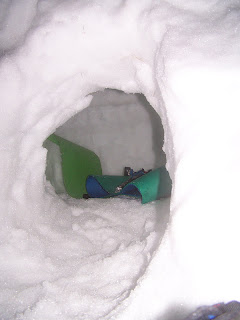 Once inside we climbed into our sleeping bags, we'd both been sweating with the effort of constructing the igloo and knew we'd quickly cool down once the hard work was completed. I was toasty in my down sleeping bag and Goretex bivi bag and Shuzz assured me he was fine as well despite only having a synthetic bag and using a mansize polybag as a bivi.
I slept for a while then some strange sixth sense woke me, I could hear Shuzz moving about a lot and he didn't sound comfy but when I asked if he was okay he said he was. Despite his answer I wasn't convinced, Shuzz is the kind of guy who'll suffer in silence rather than feeling that he was being a nuisance and when I spoke to him some more his answers weren't making much sense. I know the warning signs for hypothermia well and the alarm bells started ringing straight away, I took this picture of him and I don't think you need to be a genius to work out that he doesn't look too good! 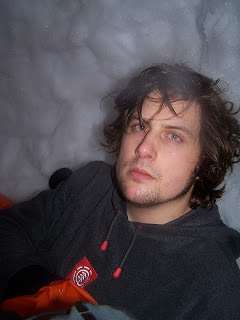 All the years of conditioning swung into effect and I got the stove on for a hot drink and gave him all my spare clothing. After a couple of hot chocolates and with the effect of the extra layers he quickly started to recover and described to me the strange sensation he'd experienced which he hadn't realised was the onset of hypothermia. 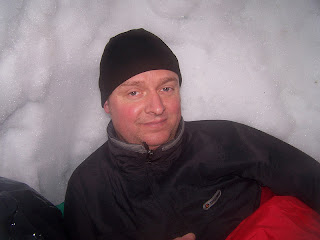 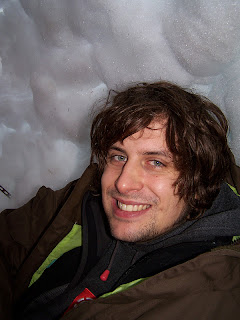 Once I was happy Shuzz was okay again we settled back down and with the extra clothing he was able to survive the night and get some sleep. The situation was never that desperate, in a worst case scenario I'd have got him up and walked him back off the hill confident that the movement would have warmed him up again (the temperature wasn't that cold outside). Nevertheless it shows how quickly hypothermia can take effect if you become damp.
Morning came and the lack of snow on the hill became blatantly apparent with the daylight. 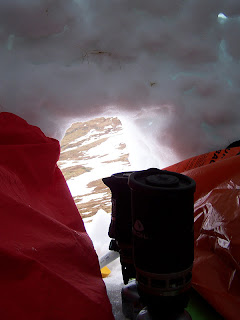 We packed up and Shuzz felt the need to have a token slide having carried the board all the way up! 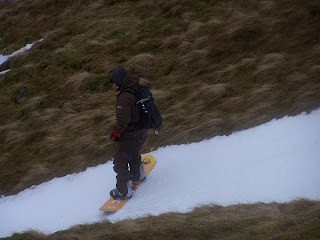 We posed by our little igloo for a few last pictures before retracing our steps from the night before. 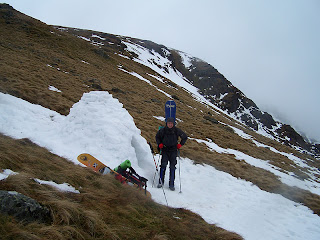 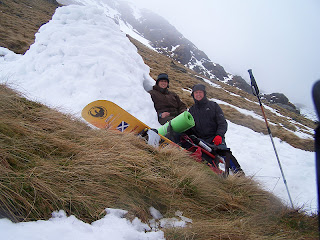 We set off back down the corrie to the car, you can see the steep headwall section behind Shuzz in this photo. 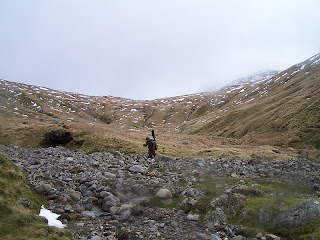