About twenty years ago I rode a mountain bike circuit incorporating Taynuilt, Loch Etive, Glen Kinglass, Glen Orchy and back to Taynuilt with a couple of mates. One section involved riding over an ancient cobble surfaced track which we jokingly referred to as being like riding over babies heads and the ride as a whole was great. Afterwards we realised that the route would work better ridden in the other direction and we always intended to ride it again the other way round to try it. We managed one attempt but were beaten back by terrible weather conditions and gradually the idea faded to the back of our minds.
When I started riding again last year it struck me that the route would be a nice one to do as a bikepacking trip incorporating an overnight camp and I started to do a little research. Reading the blog of a fellow fatbiker inspired me further and also introduced the concept of using the train to remove the tedious road sections of the route. I mentioned the idea to Ramsay and he was interested as well.
We drove to Taynuilt railway station where we were able to leave Ramsay's car. We assembled our bikes with all the associated bikepacking gubbins and then waited for the train to arrive. I'd love to say that Scotrail were a model of bike friendly efficiency but unfortunately the reality was that we were made to feel that we were a major imposition on the normal running of the train service. Thankfully our journey only involved a short train ride and we were soon spat unceremoniously out onto Tyndrum Lower station's platform. 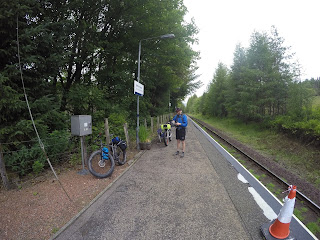 The first stage was to cross the busy A82 road and follow the West Highland Way towards Bridge of Orchy. I was expecting this section to be a bit of a dull slog (I'd ridden it before years ago but had virtually no recollection of it) but in fact it turned out to be great fun. Once again my Fatty amazed me with it's ability to ride over surfaces that would have been a challenge on my old full suspension mountain bike, even the addition of luggage didn't faze it and we had a blast negotiating the rocky and steep sections of the path. In good time we rolled out at Bridge of Orchy (pausing to field questions about the bikes from curious locals), crossed the A82 again and attacked the offroad climb up to Mam Carraigh. The weather was a little mixed at this point with some misty low cloud but that just added to the atmosphere as we took a breather at the top and enjoyed the views over Loch Tulla. 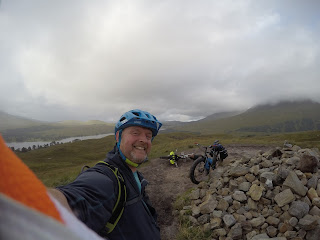 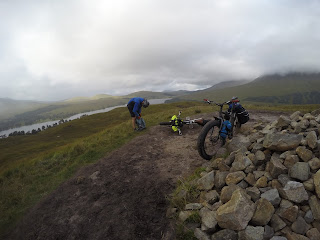 Once the view had been admired it was on with the fast and furious descent to Inveroran. I'd promised Rambo a pint if the hotel was open and as we rolled out onto the road at the foot of the descent we were presented with a sign directing us to the walkers bar, naturally a pint followed as promised. 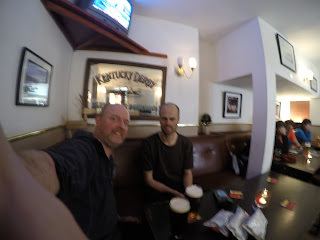 We restrained ourselves and only had one pint before jumping back on the bikes and pedalling over Victoria Bridge and turning left off the road down Glen Shira. The initial Landrover track soon gave way to a winding single track following the edge of the Abhainn Shira. The weather had improved dramatically while we were in the pub and we rode west into the lowering sun and began to look for a decent place to spend the night. After crossing the river by way of some giant stepping stones we found what appeared to be the ideal spot next to a stand of scots pines. As we pitched our tents the breeze dropped and the midgies emerged in droves, we quickly covered up and donned midge nets to keep them at bay. Unfortunately the midgies continued to blight our evening meal only vanishing later as the temperature dropped.
After a good nights sleep we emerged to a beautiful morning. We breakfasted and packed hastily as the dreaded midgies descended on us once more. The best way to get away from them was to start riding so we wasted no time in getting rolling. The riding was pleasant as we climbed up towards Loch Dochard and the watershed. 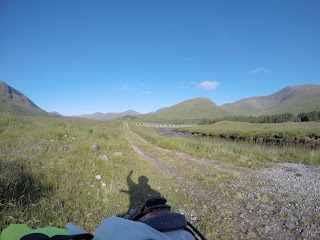 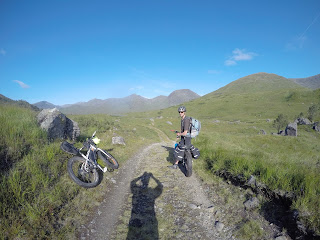 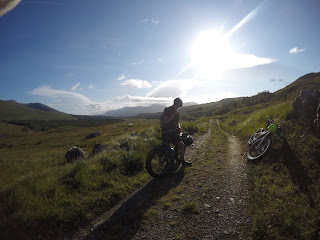 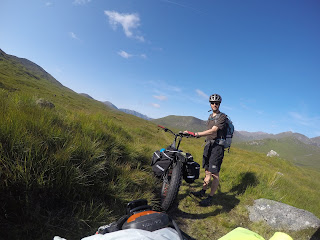 Once past Loch Dochard the trail turned downhill down Glen Kinglass over some fantastic slab sections, it was great fun finding a way through the tenuously linked rock slabs interlinked with rocky, challenging track. 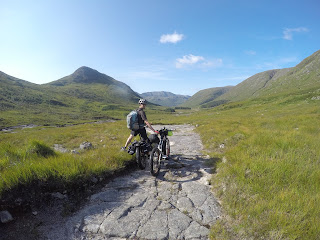 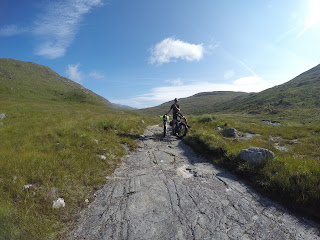 Lower down we crossed the babies head section that I remembered from all those years ago before being immersed in dense woodland as the track followed the River Kinglass. Just before the river joined Loch Etive we turned south on an undulating estate track which overlooked the loch and presented us with some stiff climbs. 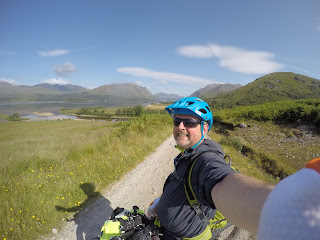 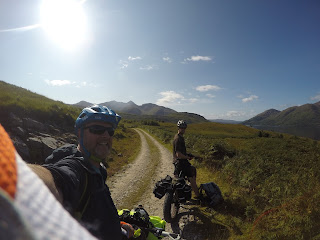 The estate track proved to be a stern test for our legs as it repeatedly climbed steeply before plummeting back down to sea level, the consolation was that we had lovely views of the loch. Eventually we popped out onto the road near to Inverawe Smokehouse and dropped down to a boggy field bordering the River Awe. Ironically our bikes had remained fairly clean up to this point but by the time we'd negotiated the few hundred metres across the field to access the suspension footbridge which crosses the Awe they were caked in mud! 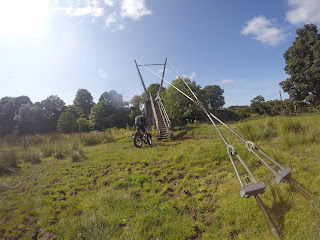 Once across the bridge a short ride took us back to our starting point at Taynuilt station where we dismantled the bikes and washed the mud off before loading up and heading for home.
I captured a lot of video of the ride, unfortunately the action footage is very bouncy due to my using my Gorillapod to mount the GoPro rather than a dedicated mount.