I haven't managed to get away for an adventure with my friend Chris for ages. Day to day distractions such as work and family have meant that it just hasn't been practical recently so when he mentioned that he hoped to have a time slot available which corresponded with me being free as well we jumped at the chance to plan something. Initial thoughts centred on a train supported mountain bike trip that I've been meaning to do for ages but weather concerns (the route has a lot of stream crossings which can be impassable in heavy rain) and bike related mechanical issues meant a change of plan. Fortunately I had a Plan B ready to go so last week we loaded up our bikes on the car and headed for the Corran ferry. The forecast wasn't good at all with the Met Office predicting a greater than 95% chance of rain for most of day one and part of day two, the saving grace was that there was supposed to be a weather window overnight which would at least mean a dryish camp. We arrived at the ferry and amazingly it was still dry so we loaded up our bikes with luggage and hopped on the first ferry we could catch. The ferry is currently free for pedestrians and cyclists however the installation of ticket machines (which were still wrapped in black bin bags) on the slipway at each side suggests that this is about to change. Almost as soon as we boarded the ferry it started to rain so we headed into the shelter of the pedestrian cabin for the short crossing. 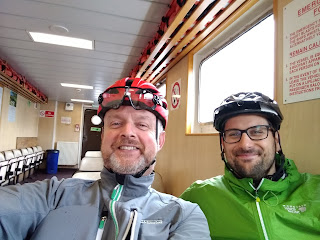 Spirits were high as we disembarked at Ardgour despite the fact that the rain was getting steadily heavier. 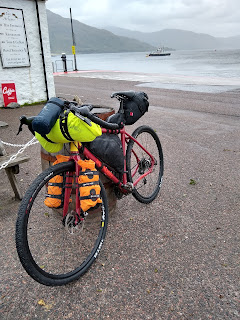 We put on our waterproofs in anticipation of the deluge to come and set off along the A861 towards Strontian. We were battered by strong winds as well on the first section alongside Loch Linnhe but hoped that the wind would be behind us once we turned westwards to climb through Glen Tarbert. Further stops were made initially to make adjustments to clothing, bikes and luggage. 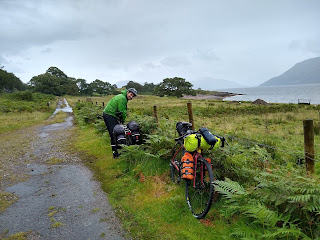 The climb through Glen Tarbert wasn't too hard and the wind did give us a bit of a push  at times as we'd hoped but the rain continued to get heavier and by the time we rolled into Strontian we were more than ready for a late lunch in the haven of the local cafe. 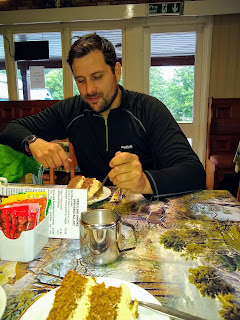 The food was better than expected but all too soon it was time to venture back out into the rain and commence the climb up to the bealach on the minor road from Strontian to Polloch. This was the first time I've ever felt the need to cycle with the hood on my waterproof jacket over the top of my helmet in an attempt to keep the rain at bay! The gradient wasn't too severe at first but as we cleared the tree line we could see the road ahead disappearing into the clouds. The climb saved it's steepest slopes for the very top section when we were already tired but although it was hard work we eventually made our way triumphantly to the top. 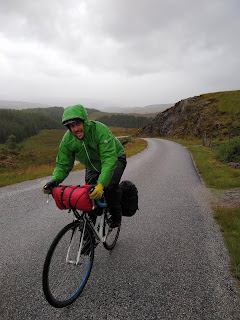 We paused very briefly at the summit but the weather wasn't conducive to hanging around admiring the views (which were mostly concealed by the cloud anyway) so we plummeted down the other side towards Polloch. I was at some advantage on the descent due to my bike having disc brakes which were far more effective than the rim brakes on Chris's bike. I ended up a fair way ahead by the time we reached Loch Doilet near the bottom and when I stopped at the side of the road to regroup I began to be a little concerned as there was no sign of Chris. He eventually caught up and revealed that he'd sensibly decided to take it steady due to his bike's lack of stopping power on such a long steep descent in the wet. We continued along to Polloch where we left the tarmac and joined a forest road that would lead us towards Loch Shiel. We caught fleeting glimpses of the loch but it was largely concealed by the forest that we were riding through. Although we weren't yet halfway round our loop we began to look for potential spots to spend the night, we passed a few likely places but pushed on hoping to find something a bit further on. It was quite difficult to gauge our progress due to the lack of open views but crossing the Allt Scamodale river (which was spectacularly in spate with all the rain) gave us a reference point. 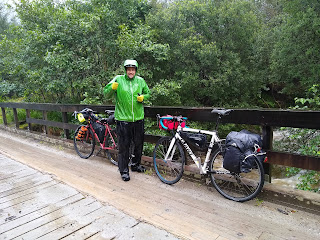 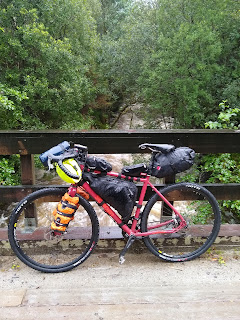 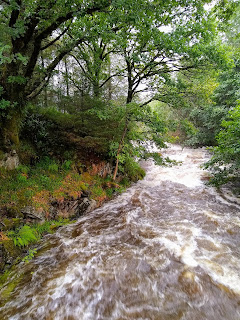 We pushed on again constantly searching for that perfect camp spot that seldom exists and sooner than expected reached the end of the forested section of the lochside. As we were both planning to hammock camp we decided we'd have to backtrack and search harder for a place to stop. In the event it didn't take long (once we'd lowered our expectations a little) and we found a decent spot right on the edge of the loch. We soon had a nice shelter set up with our tarps joined together and both of our hammocks strung underneath to allow for a sociable evening. Chris then played his trump card and unpacked a few cans of beer from one of his panniers! Sitting comfortably on our hammocks enjoying a beer was a great conclusion to a day during which the weather had proved challenging to say the least and we couldn't help feeling a little smug that we'd dealt with the conditions with no real problems. 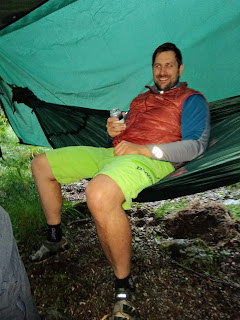 Although there were some heavy showers overnight it was dry when we woke up and started our morning routine. After eating some breakfast and packing up we loaded up the bikes ready for another day's ride. 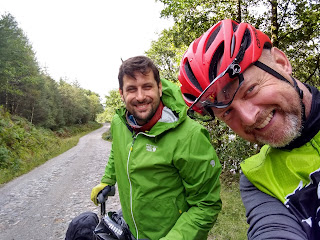 The first mile or so was very familiar as this was the third time we'd ridden it but once we emerged from the forestry we were finally treated to some fantastic views (made all the better by some patches of blue sky). 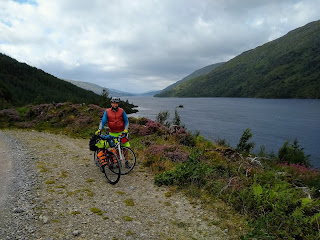 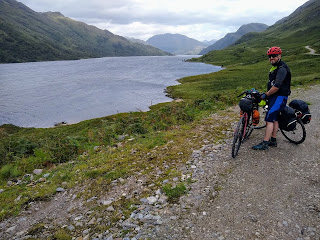 We were passed by a few logging trucks thundering along the track and a Post Office van presumably on it's way to deliver mail to the house at Scamodale! Further north there was a semi industrial fish farm development at Guesachan but the view of the islands at the north end of  Loch Shiel with the Glenfinnan monument and viaduct in the background made up for it. 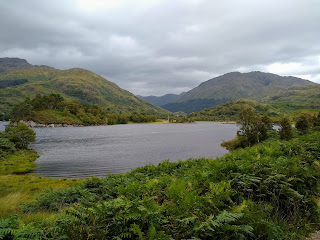 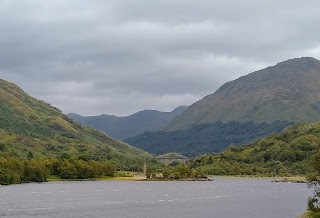 We continued on round the corner and joined the busy A830 road for a few kilometres before branching right onto the quieter A861 singletrack road which follows the southern shore of Loch Eil and the western shore of Loch Linnhe. 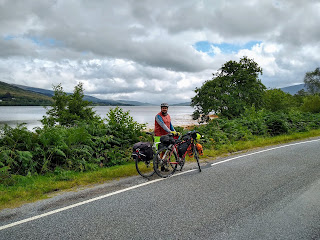 We stopped briefly for lunch at the side of the road before pushing on. Ironically shortly after stopping we passed several places with picnic benches which would have been perfect for our lunch break. As forecast it began to rain again as we approached the junction of Loch Eil and Loch Linnhe and as we turned southwest we faced a strong headwind as well. Needless to say the hoods were back up over the top of our helmets again and the only respite was provided by the line of trees which separated the road from the loch in some places. It was a case of just getting our heads down and getting on with it as we battled steadily back towards Ardgour and the ferry (which we caught tantalising glimpses of in the distance). All of a sudden it was all over and we were back at our starting point and all that remained was to wait for the next ferry back to the car. I think we were both surprised how enjoyable the trip had been despite some testing weather conditions and hopefully we won't have to wait too long until we can get back out again for our next adventure. 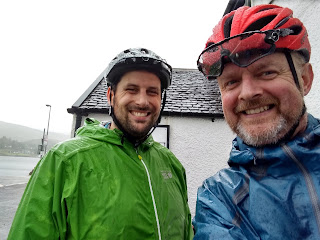