The wrong end of the loch!

Myself and Stephen have just been out for a couple of days at the quieter northern end of Loch Lomond, we hoped to meet up with a couple of guys from the Open Canoe Sailing Group (which we've both just joined). Stephen was trying his new 44 sq ft bermudan rig for the first time and this was to be his maiden canoe sailing expedition.
We launched from the public slipway at Tarbet. 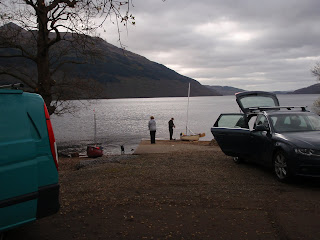 We sailed between Tarbet Isle and the shore then headed across to the east side of the loch near Cailness. 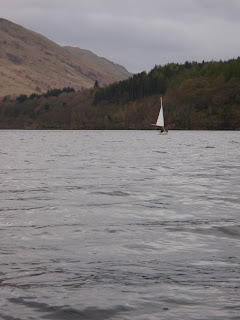 Stephen had his sail reefed down while he got used to it so I made the other side first. 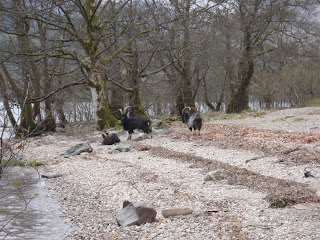 I was greeted by these fierce looking beasties! Some of the feral goats that frequent the area (makes a change from seeing wallabies and ospreys!) 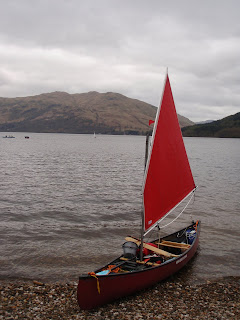 My boat with Stephen in the background. Once he arrived we decided to have a brew stop. 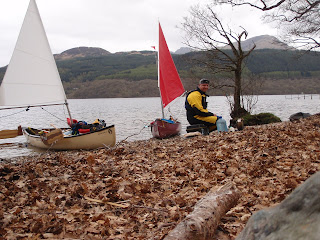 After a cuppa and some flapjack we set off sailing northwards, again the conditions varied (sometimes gentle sailing, sometimes paddle sailing) but we made steady progress. 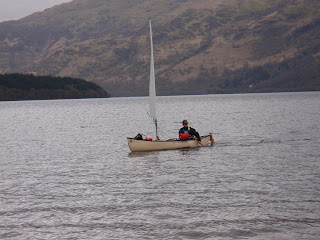 Inveruglas in the distance. 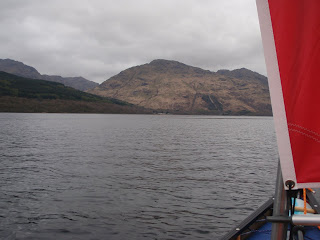 We rafted up while Stephen unfurled his full sail area which he hoped would help in the light breeze. 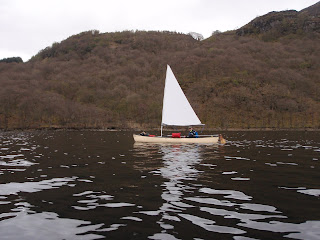 The wind remained light until we started to approach Inveruglas, it must have been funneling down Coiregrogain and all of a sudden we were whizzing along in fine fashion. We decided to head for Inversnaid boathouse where we knew that the other OCSG guys were planning to camp. When we arrived there were two tents but no sign of the occupants. We guessed that they belonged to Dave and Graham and they were still out sailing. We had a scout about and found an excellent looking campsite a little further north which even had it's own sheltered natural harbour so we decided to set up camp, have a bite to eat then do some more sailing. As we were setting up our tarps and hammocks we saw two sails on the far side of the loch which we guessed belonged to Dave and Graham. By the time we'd had a bite to eat they were back so we strolled along to say hello. By the time we'd finished yapping and admiring Dave and Graham's boats it was getting a little late to sail further up the loch so we contented ourselves with a play about just off our campsite. 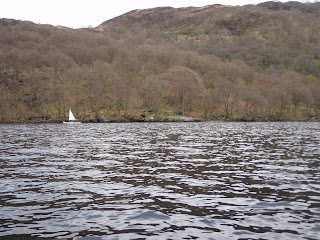 You can just make out our tarps in the background in this picture. After playing about for a while we headed in to make some dinner (after pulling the boats up from our harbour!) 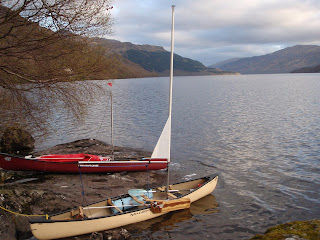 You've heard the phrase "a room with a view", we had the tarps with a view! 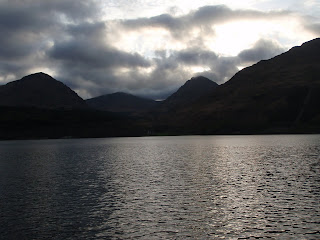 We made our dinner on my new Yukon firebox (which was excellent) then took a stroll along to the Inversnaid Hotel for a couple of pints with all the coach trip grannies (a surreal experience). We headed back early and were in our hammocks by ten thirty. 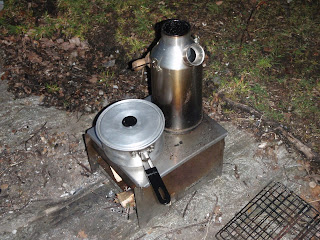 We  got up quite late (it's so nice to laze in a hammock) and we knew Dave and Graham were leaving fairly early (Graham had to drive back to Lancashire!) so not long after we started breakfast Graham showed up (followed by Dave) to say cheerio. There was very little wind and they set off paddling, we wondered if it'd pick up in time for our return journey. 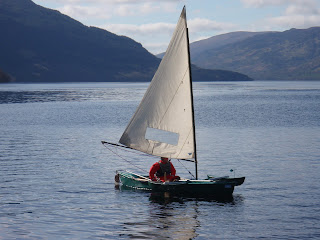 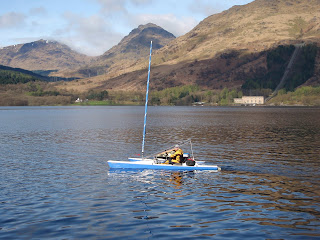 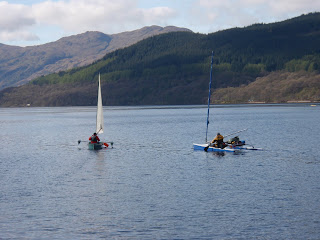 We packed and ate breakfast and by the time we were ready to leave the wind had picked right up with some white horses in evidence. Stephen reefed his rig down again while I wondered how I'd cope with my full area, oh well nothing for it but give it a go! We set off on a reach heading for the west shore and pretty soon I was miles in front of Stephen (with my significantly larger sail area). I did think about luffing up and waiting for Stephen in the middle of the loch but decided it'd be a better idea to get to the shore and wait there. It was an exciting and enjoyable sail across to the safety of the western shore. 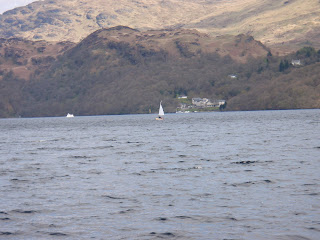 Looking back towards Inversnaid with Stephen making his way across. 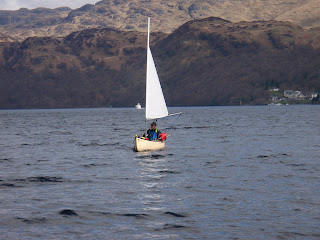 Once Stephen made it safely across the loch we headed off on a fantastic run downwind (with some good swell to surf) back to Tarbet Isle. Here the wind turned flukey and we had a frustrating combination of paddling and sailing for the last short stretch back to the slipway.
It was another great trip in the canoe and nice to go somewhere new. I'd hoped to get further north but the fickle wind conditions played against that. Still it was good to meet Dave and Graham and I can't wait for my next trip away.
Posted by Chris at 13:25